The Holocaust And One Family's Amazing Story Of Survival

For the past 26 years, Chantelle has been a mom to a son with autism. Creating a happy life for her family makes her heart sing.

The Ukraine was invaded by Nazi forces on June 22, 1941. Incendiary bombs were dropped on Kiev, Odessa and Lviv as Nazi forces surged into the Ukraine on their way east to Moscow. Initially encountering little resistance, many Ukrainians regarded the Nazis as liberators, freeing them from the oppressive Soviet regime. What many did not realize at the time was that Hitler considered the Ukrainians to be subhuman and intended to exterminate them to make room for the growth of the Reich and the German people.

Initially, Herman Goring planned to kill every Ukrainian man over the age of 15. As almost 4,000,000 Nazis forces were stationed at the Eastern Front, pragmatics won over politics and thousands of Ukrainians were deported to Germany as slave labor. Given only starvation rations and the crudest of shelter, thousands died from starvation, exposure and simply being worked to death. In all, 10,000,000 out of 40,000,000 Ukrainians died during World War II.

In the small town of Kurolowka, Ukraine lived 500 Jews. Two of its residents, Esther and Zaide Stermer, read of the destruction and terror the Nazis wrought upon the Jews during Kristallnacht on November 9th and 10th, 1938. Fearing increasing retribution against the Jews, they decide to flee to safety and secure passage and visas to move to Canada with their six children. They sell all their possessions. The day before they are to leave, Nazi Germany invades Poland. They are trapped.

All Yids of the city of Kiev and its vicinity must appear on Monday, September 29, by 8 o'clock in the morning at the corner of Mel'nikova and Dorohozhytska streets (near the Viis'kove cemetery). Bring documents, money and valuables, and also warm clothing, linen, etc. Any Yids who do not follow this order and are found elsewhere will be shot. Any civilians who enter the dwellings left by Yids and appropriate the things in them will be shot.

— Order posted in Kiev around September 26

Babi Yar, a ravine outside Kiev is famous as the site of a series of massacres against Jews and committed by the feared Einsatzgruppen. Between 100,000 and 150,000 jewish men, women, children, the elderly and disabled were murdered here. The single largest "aktion" (killing) took place on September 29-30, 1941 resulting in the agonizing deaths of approximately 33,000 people. Despite screams of terror, the terrified cries of children, the anguished begging of mothers to save their baby, and the agonizing sounds of the undead (many of whom died being crushed by bodies in the pit and not by bullet wound), the SS never wavered from their mission of death.

While many Jews were being systematically murdered at Babi Yar, the citizens of Kurolowka were ordered to register and pack one suitcase for their "new life" in the ghetto. Esther, the matriarch of the Stermer family refused to go saying, "if we go to the ghetto, we die." Esther sent her oldest son, Nissel, to scout out 6 hiding places for all members of the family. As the round up began, the family was hunkered down in bunkers in barns all over the village praying not to be found.

By 1942, the Nazis started to systematically go house to house, looking for the hidden and killing the hosts. It was now very clear that anyone found would be sent to Belzec and certain death. Nissel was sent once again to find a suitable hiding place for the entire extended family. He succeeded and on October 20th, 1943, 28 people enter Verteba cave with food, candles, kerosene, water, and straw. Bedding was made from boards and they also brought pillows and covers.

Nissel and his father, Zaide, bribed the Ukrainian police and obtained permits to continue working in town. They collected and sold scrap metal and were able to bring food and news of the outside world to their family in the cave. When news came that there were rumors peasants were in the cave, the family moved even farther back to escape detection.

With whisperings of impending capture, Saul, an older son, was sent to find a means of escape from the cave. If the Nazis sealed the cave entrance, they would surely die, as their food supplies were dangerously low and the only interior source of water, drippings from the cave ceiling, would surely prove to be inadequate.

Armed with only candles, Saul, and his cousin, Sam, searched for an escape route from the cave. With poor visibility and hindered by slippery, sticky mud, they found an area of dry earth and started to dig. Soon they could see a shaft of light and realized they had found a natural exit filled with dirt. Unfortunately, the shaft was more vertical than horizontal and was 50 feet long and would be far too challenging for young children and elderly adults. So Nissel stole a heavy chain from a local farmer which they then secured to the rock allowing everyone a chance at survival.

It was April 5, 1943 when shouts of "Rouse! Rouse!" pierced their solitude. They had been found. Terror and confusion reigned as the family members scattered, looking for the exit or a place to hide. Five family members were captured and the rest managed to escape out the exit and into the relative safety of the forest. With no real safe place to go, they quietly crawled back into the village and hid in barns and waited. But for what?

Deal With The Devil

The Nazis had turned all five prisoners over to the Ukrainian police. The price to free each prisoner would require not only gold, but a body to replace the prisoners. Zaide did indeed produce 5 bodies: two men, two women and one child. Where and how he came up with the bodies we will never know.

As a condition of their release, the Ukrainian officer had them lie down in a field where he would fire a gun over their heads as if they were being executed. Sadly, he shot two of the prisoners, fearing they would be recognized in town and put his own life in peril. 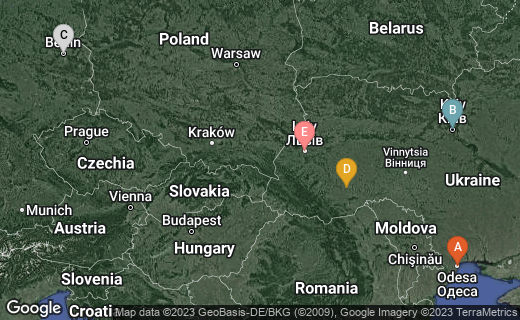 On May 5, 1943 a new cave is found. Priest's Grotto was accessed from a hole in the ground that led to a shaft that you would slide down. At this point they had lost everything. The money was gone and so was the food. However, Priests Grotto provided something they desperately needed: a place to hide and water.

At this point then entire family, all 38 of them, were living in the cave. Neither Nissel or Zaide could safely work and were forced to steal food at night while their family members prayed for their safe return. Angry villagers found the entrance to their cave and filled it with dirt. It took them 3 days and nights to clear it out.

By December, 1943 things looked grim. They hadn't left the cave for two months, fearing the worst. There was nothing to burn for light, so they slept most of their days. But by the end of December, action needed to be taken. Their underground water supply was starting to dry up and they desperately needed some way to replace it. It wasn't until March, 1944, that Sam, who had drawn "the short stick" exited the cave only to find they were caught between the Germans and the advancing Russian army. The waiting game continued.

April 12, 1944, a note on a string was dropped into the cave. The Russian army had beat back the Germans and they were free. Free to feel the warmth of the sun on their faces, to walk through the meadow without fear of death, and to pick up the shattered pieces of their lives.

Life under the Communist regime after the war was hard, and the entire Stermer family left the Ukraine in 1946 for a displaced person's camp in Germany. Shortly thereafter they immigrated to Canada and the US settling in New York and Montreal.

Today, the descendants of the original 38 number 125 and are living safe, happy, productive lives in their adopted nations.