'The Last of England' by Ford Madox Brown 1855, Pre-Raphaelite Painting

Amanda is a keen artist and art historian with a particular interest in 19th-century art, especially the work of the Pre-Raphaelites.

'The Last of England' by Ford Madox Brown 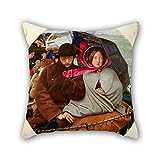 'The Last of England' - leaving it all behind

It's almost impossible not to be moved by Ford Madox Brown's 1855 painting, 'The Last of England'. Painted in an era when emigration from Europe was at it's height, this picture gives us a very intimate glimpse into what it actually meant to pack up one's life and sail off into in an uncertain future. This is a decision that would not have been taken lightly, and yet thousands upon thousands of people, men, women and children, quit their homes and packed up their possessions in the hope of a new start in the Americas, or Australasia during the 19th century. For many amongst the poorer and middle classes, this was an opportunity to escape the grinding poverty and the slums that had grown up in big cities in the wake of industrialisation. For others it was the prospect of adventure, and the lure of the unknown that drew them to take passage to a new world and a fresh start.

In 1852, the sculptor Thomas Woolner, one of the founder members of the Pre-Raphaelite art movement, took ship for Australia. Ford Madox Brown was a close associate of Woolners, and this painting, 'The Last of England', was inspired by his departure. The emigrants are depicted in great detail, and the picture gives us a snapshot of Victorian society.

In the background we see the white cliffs of England receding into the distance, and the green, choppy sea hints at challenging times ahead. On a net In the foreground we see some of the ship's supplies hanging. You can't help but wonder just how fresh those cabbages will taste a few weeks into the voyage! Behind the main characters a small child in a bonnet grasps her mother's scarf. Someone else is smoking a long clay pipe, and a man in a top hat is brandishing his fist at the coast line as if to say, 'and good riddance to ye!'

Look at the hands in this close-up

Hand in hand into a new beginning

For me this is the most touching detail in the painting. The resolute young man, grim faced, yet determined, has turned his back on England, and he and his young wife stare at the horizon, taking comfort each from the other. His bare, workman-like hand is clasped by her neat, gloved hand, whilst, just visible in the folds of her cloak, you see her left hand, clasping the small fist of the child that is cradled in the crook of her arm.

'The Last of England' was sold in March 1859 for the sum of 325 guineas. It now hangs in Birmingham City Museum and Art Gallery.

Ford Madox Brown was born in the French port of Calais in 1821 and died in England in 1893. He is buried in the St Pancras and Islington Cemetry in London

A film about 19th century emigration