The Legendary Pot Growers and Moonshiners of Appalachia

For many years Appalachian hillfolk have had a secret: most of the strongest cannabis in the world comes from this mountainous region on the eastern coast of the United States. To understand how this happened, we first need to understand the history of whiskey in Appalachia.

In the 1700s, Scotch and Irish were leaving their countries in droves to escape poverty and a tyrannical government. They were unwelcome in most of the major cities in the Colonies, so they staked their claims in the harsh mountains of Appalachia. One of the things they brought with them was a cultural knowledge of distilling, and they started making whiskey; a lot of it. The flood of booze was so substantial that it actually changed the local economies from a rum-based bartering system to one that was whiskey based.

The Scotch-Irish community had a rough life in the region they tried to settle. They invaded the lands of the Indians, ultimately fighting with them for twenty years. Through this, they became hardy fighters and learned to live off the land. After a few generations they adapted and became completely self-sufficient communities, rarely coming down from the mountains to interact with outsiders. The whiskey flowed and they started thriving on the trade—until George Washington ruined all the fun.

The Revolutionary War (1775-1783) was mainly fought over taxes. George Washington ran up a large bill paying for the Revolution and needed to figure out a way to pay it off. He decided to start America’s first sin tax, and proceeeded to levy all the whiskey that the Appalachian hillfolk were making. At the time, most of the population didn’t care about how the Scotch-Irish in the mountains made a living, and Washington thought it would be an easier tax to sell to the public if he taxed discrimated outcasts.

The Scotch-Irish in the mountains of Pennsylvania refused to pay this unjust tax. In response, Washington raised an army of ten thousand men to overwhelm, arrest, or kill anyone who refused to pay; this became known as the Whiskey Rebellion (1791-1794.) One result of this was that many people grew to dislike George Washington. After all, he had gone to war over unjust taxes, yet one of the first things he did in office was to declare an unjust tax, and attack the country’s own people.

Generations of Mistrust of the Government

This event had an extremely damaging effect on how the moonshiners viewed authority: they never trusted the government again, and passed down this sentiment to their progeny. Even to this day that spirit of self-reliance and government defiance lives strong in Appalachia. The families and clans closed ranks and moved deep into the hills to keep making whiskey.

This assault on the mountainfolk went on through the Civil War (1861-1865), with Lincoln also harassing and attacking any Appalachian whiskey makers who refused to pay taxes to help fund the war. The government’s war on hillfolk went on until Prohibition took hold in the 1920s (1921-1933.)

The Appalachian moonshiners were in the right place at the right time when alcohol became illegal. They already had the structure in place for generations to make lots of whiskey, and they could easily pick up their production to make a fortune. The government ramped-up their raids, but met a very uncooperative public when they rolled into towns. The prohibition police got no help locating the stills and made very few busts. This encouraged many more people to get into moonshining, and inevitably, the market became oversaturated. When Prohibition ended, the hills were left with way too many distillers.

In order to survive, many moonshiners took on a second business of selling marijuana. The soil and climate of the mountains was ideal for growing the cannabis plant, and after a few generations of selective breeding, they developed some of the best weed in the world. The plants grew over 15 feet high, with leaves bigger than a hand. The buds were much larger than average, and the THC content was two to three times the strength of other pot from around the world. The money was becoming so good that many quit moonshining and threw all their efforts into cultivating marijuana.

As the DEA rose to power, they cracked down hard on these so-called rebels. New laws allowed the government to confiscate any property a “drug grower” had, and to sell it off. The hillfolk reacted to such a harsh law by not growing drugs on their property anymore. To mitigate risk, they moved their grow operations onto government-owned land and parks.

Battle Against The DEA

Even now, during the month of September, the growers sneak into the land and reap their rewards. Of course the DEA has tried to set up stings and catch the pot farmers, but most attempts have been unsuccessful. Even with insane amounts of money being given to the DEA, they can only find and destroy a small percentage of what is growing on public land. The Appalachian farmers even go as far as to set booby traps to protect their crops. Many agents have been hurt when trying to destroy the plants. 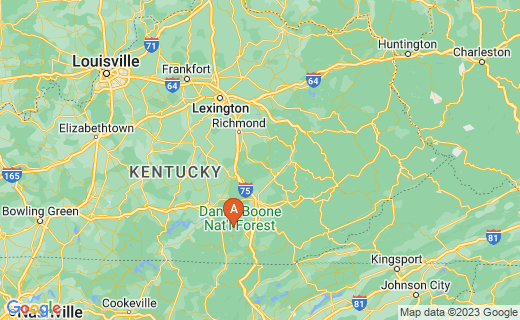 The largest battlefield over pot is in the Daniel Boone National Forest, KY.

Most defense measures are just painfully annoying. Things are done like running fishing wire across trees at eye level with fishing hooks on them. Tripwires with animal traps are also a popular hillfolk security technology. Some of the devices are particularly nasty and cripple or kill the drug agents. These Booby traps include things like Vietnam style Punji pits with wooden spiked floors. The larger growers actually use redneck landmines made of pressure activated shotgun shells or real surplus grenades. These improvised explosive devices are common in war-torn countries; one wouldn’t expect to see them the mountains of Kentucky.
The largest battlefield on government property takes place in the Daniel Boone National forest. Professional weed growers use the fertile soil to plant hidden patches all over the forest. Even with massive spending and manpower, the DEA only finds a small fraction of the pot farmers’ hidden stashes. The irony, of course, is that Daniel Boone most likely grew and used hemp himself, like almost all people did in colonial times. In fact, hemp was so useful that places like Georgia passed mandates to require farmers to grow hemp because it was so useful. You can bet when growing all that hemp, they also grew a good bit of marijuana with it.
Marijuana and hemp were everywhere in the earlier days of this country but that history has been completely ignored and even systemically erased. Hemp was considered so useful and superior to other fibers that it was the first choice of Appalachian people. They also made all kinds of helpful medicine from the oils. Even today, you can still find lots of hemp rope, clothes, and even houses made of hemp bricks. Up until World War II, the government actually encouraged farmers to grow hemp for the war effort. Check out this video the government released to the promote hemp.

Why Is Pot Illegal?

A propaganda campaign was started to demonize the plant by William Randolph Hurst and his newspapers. Hurst owned large holdings of timber and wanted the competition of the cheaper, superior plant to go away. He used his newspaper empire to smear the use of hemp and link the plants to deviant behavior. He also played into the fear of the racist white population and painted marijuana users as evil rapist Mexicans and Blacks. The campaign worked and public opinion shifted enough to support outlawing the plant. The only thing the government forgot about was that Appalachian people don’t put much weight into what the government says. The hillfolk ignored the anti-pot propaganda and just got better at glowing it clandestinely.
This historical chess match shows no sign of stopping and there is a good chance that the mountainfolk will always find a way to stay a step ahead.

Find Out Even More History Here.

Should Pot Be Completely Legal?

Should Pot Be Decriminalized?