As a deaf-blind individual who prospered in a world that very much relies on sight and hearing, Helen always placed stock in remaining an optimst. For many, optimism is simply remaining positive during a bad day, but for Helen, optimism was a way of life – a necessity. More importantly, Helen believed pessimism to be dangerous, never allowing herself to lose hope. “If it be true that optimism compels the world forward, and pessimism retards it,” Helen once wrote, “then it is dangerous to propagate a pessimistic philosophy.”[i]

Just after graduating from college at twenty-three, Helen wrote her second book, My Key of Life: Optimism. Released to widespread critical acclaim, the book was simply a guide to obtaining and retaining optimism and hope. Nearly overnight, Helen became a beacon for hope and overcoming indescribable odds.

Using this recognition, Helen began to travel the world, sharing her story and optimism with others. And for Helen, this was no small feat. Imagine a time speaking in front a large audience, now imagine you cannot hear yourself, or see your audience. This was just one small challenge in Helen’s life.

After years of voice coaching, and tremendous concentration, Helen was able to speak. During one early lecture, however, Helen began to lose her composure and lost control over the tone of her voice. Realizing this, Helen ran crying off stage. Yet, Helen did not let this event, unthinkable to many, stop her. Just moments later, she walked back on stage and continued her lecture. For the rest of her life, Helen gave thousands of lectures all over the world.[ii]

Throughout her life, Helen believed it was her lot in life – her “sacred duty” – to share her optimism with others. In her book on optimism, Helen wrote, “If I am happy in spite of my deprivations, if my happiness is so deep that it is a faith, so thoughtful that it becomes a philosophy of life, - if, in short, I am an optimist, my testimony to the creed of optimism is worth hearing.” [iii]

“The will to be happy,” Helen once wrote, “animates alike the philosopher, the prince and the chimney-sweep. No matter how dull, or how mean, or how wise a man is, he feels that happiness is his indisputable right.”[i] For Helen, happiness could not be found in wealth or material possessions, but in ever-lasting riches, such as close friendships and the companionship of animals.

As consumption grew in the world, so did contentment in material wealth. This fact troubled Helen, who saw material wealth as an illusion. “Reality,” Helen warned, “even when it is sad, is better than illusions. Illusions are at the mercy of any winds that blow. Real happiness must come from within, from a fixed purpose and faith in ones fellowmen.”[ii]

Helen believed that happiness derived from material objects was elusive and short-lived; joy came from within, and from the hearts and minds of others. “Most people measure their happiness in terms of physical pleasure and material possession.” Helen advised, “Lacking this gift or that circumstance they would be miserable. If happiness is to be so measured, I who cannot hear or see have every reason to sit in a corner with folded hands and weep.”[iii]

In an age of technology, relationships have become artificial and lacking. Therefore, Helen's thoughts on happiness are more important than ever before. “If those who seek happiness would only stop one little minute and think, they would see the delights they really experience are as countless as the blades of grass at their feet.” 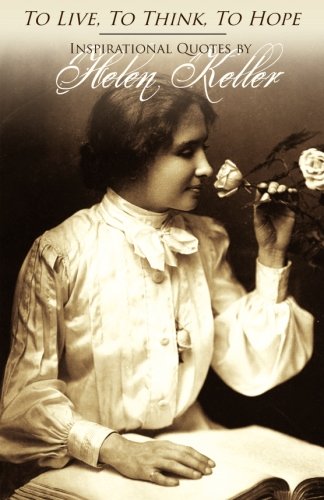 To Live, To Think, To Hope - Inspirational Quotes by Helen Keller
Buy Now