The Making and Manufacturing of Communion Wafers 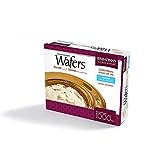 The Ingredients Used in Making a Communion Wafer

The communion wafer is (as anyone who has tasted it knows) a very bland food. It represents the body of Christ so it has big meaning but the food itself is very simple. The communion wafer’s simplicity is part of what makes it such a great ritual food. It is not the taste of the communion wafer that you focus on (since it barely has one) but rather the ritual surrounding the consumption of the Communion wafer.

The most basic communion wafers are made out of only two ingredients. They are made out of a combination of very pure wheat flour and water. Simple isn’t it? There are some communion wafers that may contain slightly more complex recipes. They may include yeast and some may even include salt to give them the tiniest twinge of flavor (a flavor similar to human tears and perhaps representative of the human condition of suffering).

The most special ingredient that is sometimes, but only rarely, used in the making of communion wafers is holy water. In some situations, holy water may be sprinkled over the dough that is to be used to make communion wafers. The holy water is then kneaded into the dough and the wafers are made.

Over time, it became less and less specialized as to who was allowed to bake communion wafers. This began with the expansion of the right to certain orders of nuns who historically began to make communion wafers as a way to gain some financial profit for the church. As time went on and we moved into modern society, the task of making communion wafers began to fall on large industry manufacturers and moved out of the realm of sacred rituals that had existed previously with the independent bakers and the nuns.

Today there are several different large manufacturers that produce communion wafers as a major or minor part of their businesses. However, it is reported that one single manufacturer produces the communion wafers for over three quarters of the Roman Catholic, Episcopalian and Lutheran churches in the United States, Canada, England and Australia. That manufacturer is The Cavanagh Company which is a family business located in Rhode Island.

What’s interesting about the manufacturing of the communion wafers, at least by this company, is that they pride themselves on the fact that the work of this business is done entirely by machines. They promote their product as “untouched by human hands” which supposedly helps to preserve the sanctity of the product despite the fact that manufacturing of communion wafers has shifted from being the work of nuns and bakers sanctioned by the church to being the work of a big business. And a big business it is; the company employs three dozen full-time staff members to help keep up with the demand for communion wafers that is coming in from all around the world.

There may be any number of reasons that The Cavanagh Company decided to get into the business of manufacturing communion wafers so many years ago but certainly at least one of those reasons was to make a profit as a business. So how is this business doing now that the economy has shifted and many niche businesses are losing money? Well, it turns out that this is one business that it’s probably a good time to be a part of.

According to news reports, The Cavangh Company is one of very few businesses that is actually reporting an increase in sales as a result of the downturn in the economy. When times get tough, more and more people head to church. With the economy facing tough times in all areas of the globe where communion wafers are served, there are more people at the church who are taking communion and that means a better bottom line for the communion wafer family business.

Some People Want a Return to the Past

Although most of the world’s communion wafers are supplied by this company, there are still convents and parishes that make their own communion wafers all throughout the world. There are some people who are pushing for a return to this way of making communion wafers. Reasons for this push include a desire to financially assist the church and a belief that the product is more sacred when created by these people. Although this push is unlikely to make a big change in the business of manufacturing communion wafers, it is certainly something that local people may consider doing. After all, we all want to put our money where our mouths are right?

Note: Follow the links below to all of the articles that were researched when writing this Hub.