The Manhattan Project: the Important Role Silver Played In the Building of the Atomic Bomb

Melvin is an avid reader and a retired scientist (chemist) after working for one major pharmaceutical company for 32 years.

The Manhattan Project was a massive, secret organization initiated by the United States’ Army with the goal to generate enough Uranium-235 to build an atomic bomb before Nazi Germany and Japan. Before it was all over the Manhattan Project would eventually employed more than 130,000 workers at a cost of about 2 billion dollars in massive facilities covering about 90 square miles in Oak Ridge, Tennessee located 20 miles west of Knoxville, Tennessee. Canada and the United Kingdom was also involved in this project. In order to process enough Uranium-235 to make the bomb, the army had to obtain permission from the United States Treasury Department to borrow tons of silver stored at the West Point Bullion Depository in New York with a catch. They had to account for and return all the borrowed silver to the depository after the project was completed or within five years.

Manhattan Project: The Birth of the Atomic Bomb in the Words of Its Creators, Eyewitnesses, and Historians
Buy Now

Before the Manhattan Project, only a small amount of Uranium-235, about a few milligrams, was available and was only being produced under laboratory settings. Natural occurring Uranium is 99.3% Uranium-238 and 0.7% Uranium-235. That means for every 100 pound of naturally occurring Uranium, only 0.7 pounds of it is Uranium-235. Only Uranium-235 is fissile, capable of sustaining a chain reaction of nuclear fission. Therefore, the main goal of the project was to devise a safe and efficient way to produce sufficient enriched uranium-235 for an atomic bomb. To make an atomic bomb 50 kilograms of Uranium-235 was needed. This quantity of Uranium-235 is called its critical mass. Keep in mind that it takes 1000 grams to make 1 kilogram of material. An ounce is equivalent to 28 grams so 50 kilograms is equivalent to 110 pounds. The army only needed 110 pounds of Uranium-235 to make the most destructive bomb ever. This does not sound like a lot but at that time it was not easy to make large quantities of Uranium-235.

The other goal of the project was to scale-up the laboratory method to an industrial production level in order to produce a lot of Uranium-235 in a relative short period of time since time was critical. Nazi Germany already had a running start to produce the first atomic bomb and Japan was planning to build one also.

The Origin of the Project

This project was unlike any project before it. The idea of the project was initiated and organized initially by the Office of Scientific Research and Development and later handled over to the War Department in 1942. It first offices were located, believe it or not, on Broadway in New York City as part of the Atlantic Division Headquarters and was called the “Manhattan Engineering District” or MED. The name was later changed to the “Manhattan Project”. Colonel James C. Marshall became the first District Engineer and remained in that position until Colonel Kenneth Nichols replaced him in 1943. Major General Leslie Groves was appointed commanding general of the project. 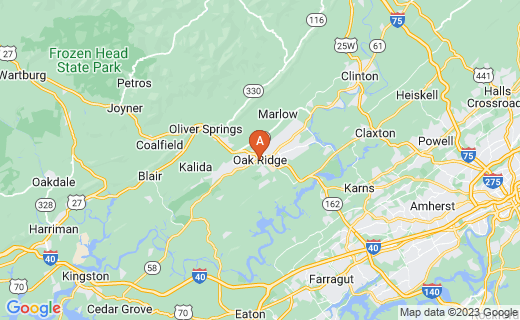 The location of facility where Uranium-235 was collected for the the production of the first atomic bomb. More 130,000 people once worked here.

Before the Manhattan Project, there were several ways to produce Uranium-235 and ultimately three of them were used to produce the Uranium-235 during the project. The three main techniques used for uranium enrichment, the separation of Uranium-235 from Uranium-238, were performed as a series in the following order: thermal diffusion, gaseous diffusion, and electromagnetic separation. The electromagnetic separation technique, the final step in the process, is the one I want to discuss here since it pushes the Uranium enrichment to 85%, which was pure enough for atomic bombs.

Since the electromagnetic separation technique involves using magnets created by winding copper wire around a core and supplying electricity through the wire for the coils, Nichols and Marshall immediately realized that they would need a lot of copper for this project if they were going to scale this up to industrial level. But copper at that time was primarily used in shell casings during the war. So they came up with the idea of using silver as a substitute and there was only one place they knew to get that much silver; the West Point Bullion Depository vault where all the U.S. Treasury silver was stored. Nichols met with Daniel Bell, the Undersecretary of the Treasury Department, on August 4, 1942 to submit a request to borrow 6,000 tons of silver from the depository.

The Making of the Atomic Bomb
Buy Now

How was the Borrowed Silver Used?

Once the source of the needed silver was confirmed construction of the electro-magnetic separation plant, codename”Y-12” was started in 1943. It took 20,000 laborers 67 million hours to complete the construction of 200 buildings for this complex. This is where all that borrowed silver from the West Point depository comes in. The borrowed silver was used for the windings in the coils to construct these electro-magnets. A total of 940 magnets were constructed with coils fabricated from about 28 million pounds of silver in the Phelps-Dodge Copper Products Company located in Bayway, New Jersey and another 268,000 pounds of silver was shipped to Oak Ridge to be fabricated into busbar pieces. Busbars were large conductors located over the magnets that conducted electricity to each magnet or calutron. The Calutrons, a total of 96, were arranged in an oval configuration called a racetrack. The shape was later changed to a rectangular configuration due to problems regulating the magnets in the curved portions of the oval racetracks. A total of 12 of these racetracks were built with a grand total of 1,152 electro-magnets.

The electro-magnetic mass spectrometers (calutrons) used in the projects were large equipments (much larger than a man) used to separate the Uranium-235 from Uranium-238 by shooting an accelerated stream of heated uranium tetrachloride molecules which was vaporized into positively charged ions, between powerful electro-magnets inside a vacuum tank. The magnets bent the stream of ions into two streams where the ions for Uranium–238 and Uranium-235 were collected into separate collectors, since they followed different trajectory paths based on their mass. Only 100 milligrams of Uranium-235, about the size of an aspirin tablet, were collected a day in each calutron. This was the reason why 1000 calutrons was needed to maximize the collection rate of Uranium-235.

Accumulation of the needed Uranium-235 was a gradual process. The Oak Ridge facility did not produce it first 25 kilograms (55 pounds) of bomb-grade uranium until April 1945. It would take another three and a half month (mid July) before the facility would reach its goal of 50 kilogram (110 pounds) of Uranium-235. The end result was the accumulation of enough Uranium-235 to make the first atomic bomb called Little Boy, which was dropped on Hiroshima on August 6, 1945.

Due to the improvement in the separation process using the gaseous-diffusion technique, just about all the Y-12 buildings except one was shutdown in December of 1946. The transfer of control of the Manhattan Engineering District to the Atomic Energy Commission took place on January 1, 1947. Some of the calutrons are still in use today to separate every element in the periodic table. Most of these calutrons were refitted with copper winding and the silver was removed and sent back to the depository in West Point. The last of the Manhattan Project silver was not return to the depository until June 1, 1970; obviously way past the five year stipulation put forth by the U.S. Treasury back in 1942. In conclusion, all 98 million pounds of silver plus more that was used for the project back in the 1940s were finally back in the vault after June 1, 1970, as promised.