Unvrso is a lover of nature and technology. He has been writing for HubPages since 2009 on various topics.

Temple of the Warriors, Chichen Itza

Stone Version of the Maya Calendar

The Maya civilization is thought to have reached its highest level of development during the Classic period from 250-900 AD. Its development continued throughout the Post-Classic period, which was brought to a halt by the arrival of the Spanish.

The Mayans like many other Mesoamerican civilizations developed systems based on its observation of the skies; however, the Maya civilization is noted for having development a writing epigraphy system and the calendar with a higher degree of sophistication than any other civilization.

The Dresden Codex, which is one of the three known books to have survived Spanish destruction, is a book of 39 sheets inscribed on both sides with the epigraphy developed by the Mayas. Most of its content is of astronomical nature.

The Maya civilization, along with other Mesoamerican civilizations, is believed to have been influenced by the Olmec civilization which developed in what is today known as Tabasco and Veracruz. Anthropological studies have shown that the Olmecs developed the calendar used in the region, and established architectural patterns.

In the present, Maya descendants maintain their traditions and beliefs which is a mixture of ideas brought by the Spanish with their own ancestral ideas.

The Maya civilization developed in the regions of Guatemala, Belize, Honduras, El Salvador, and the Mexican states of Chiapas, Tabasco Campeche, Quintana Roo and Yucatan. The influences seen in its architecture are believed to have resulted from the interaction among other Mesoamerican communities. Although the Maya civilization is thought to have disappeared sometime along the end of the Classic period, Maya descendants today form considerable populations throughout the Maya region, maintaining traditions and beliefs acquired during the fusion of the ideas brought by the Spanish with their own ancestral ideas.

The Mayas were nomadic who usually lived in small family groups. At around 2500 BC, they began cultivating maize and abandoned their nomadic way of life, and began settling villages around cornfields. They created arable land by using a slash and burn technique in the forests where they raised crops of maize, beans, squash and tobacco. In the mountainous regions of the highlands, they built terraces on the slopes of the mountains. As they adopted new ways of living and enhanced their trading with neighboring communities, they grew from small farming communities, and established more complex forms of living, creating numerous communities known as city states with their own governement systems.

Have you visited any of these Mayan sites?

During the Classic period, the Mayas reached their highest level of development. It was during this period that they created a number of kingdoms and small empires, and built their largest structures, such as palaces and temples. Their empires consisted of numerous independent city states, where administrative and religious ceremonies were held, and around which they settled an agricultural community. Such city states which developed in the low-lands include Takil, Palenque, Yaxchilan, Copan, Uxmal and Bonampak, among others. After the collapse of the low-land city states, Maya culture continued to thrive in the Yucatan Peninsula.

A Classic Maya city consisted of a number of temple pyramids and palaces which were arranged around broad plazas or courtyards. Many Maya cities included ball courts, as part of their religious rituals. During a ball game the losing team was usually destined to die. Another feature in the Maya temples was the construction of sauna baths. The temples were constructed so that they corresponded with the Maya interpretation of the orbit of some heavenly bodies. Individual groups of thatched-roof houses were usually built around these important buildings, providing shelter to the majority of the Maya people.

Chichen Itza During an Equinox

The Pyramid of Kukulkan

During the autumnal and vernal equinoxes, which occur during the fall or spring of every year, the light of the Sun gets reflected off the pyramid of Kukulkan, producing the ilusion that the feathered serpent is moving.

The palaces and temple-pyramids were reserved for religious ceremonies which were held by the priests who, like in other Mesoamerican cultures, were the ones that established communication with the deidies of the community and decided most of Maya life, including marriage, farming and sacrifice. Important features outside the temples were carved stone slabs known as stelae, describing the accomplishments of Maya rulers in hieroglyphics texts. City walls were rare among Maya cities; however, recently discovered cities, such as Tulum show protective barriers, which may have been used as protection from enemies.

The Mayas believed in recurring cycles of time on which they based their rituals and religious ceremonies. The Maya priest was the one who interpreted the cycles and gave advice based on the relations of their calendars about past or future events and the agricultural cycle. Mayas, like other Mesoamerican civilizations, practiced human sacrifice, and they believed in a world composed of three layers: the Heavens, the Earth and the Underworld. They called Xibalba a place in the underworld where people were thought to go after death. The Mayas worshiped the gods of nature from which their daily life depended, including the god of maize (Yum Kaax), the god of Rain (Chac) and the god of the Sun (Kinich Ahau), among others.

The Mayas built their pyramids along the Mesoamerican region between 1000 and 1500 years ago. The pyramid of Chichen Itza was built in a way so as to coincide with the light of the Sun during the autumnal and vernal equinoxes. The pyramid is dedicated to the snake god kukulkan, whom the Maya portrayed as a feathered serpent.

During the Post classic period comprising the time span between the 10th and 16th century, the Maya cities, including Chichen Itza, Edzna, Coba and Uxmal, continued flourishing; however, after the decline of Chichen Itza and Uxmal, the city of Mayapan becomes the ruling city state of Yucatan. After a rebellion within the city of Mayapan, the city is abandoned in the second half of the 15th century and political union is lost. Various city states compete among themselves to rule over the others until the arrival of the Spanish.

Unlike the Aztec and Inca Empires, the Maya civilization lacked a centralized political ruler, who once overthrown would accelerate the subjugation of indigenous tribes. Instead, the Spanish had to subdue individual city states, many of which maintained intense resistance. While the Spanish main motivation since the start of their incursion into the New World was the appropriation of precious metals, such as silver and gold, the Maya region lacked these resources. This may have delayed the conquest of Yucatan which lasted more than 150 years.

The Spanish burned most Maya books in 1541 in an attempt to eliminate any vestiges of Maya religion..

There are three codices written in hieroglyphics which stem from the pre-Columbian Maya Civilization and are considered as authentic Maya records: The Dresden Codex; the Paris Codex; and the Madrid Codex. 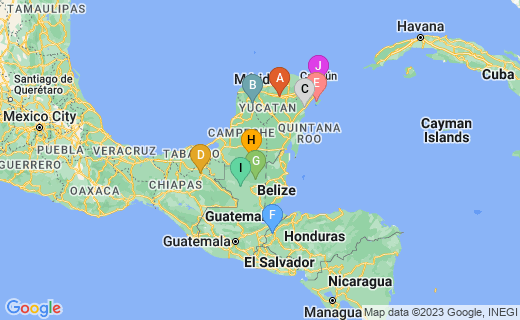