On Tenerife and some of the other Canary Islands the butterfly you are most likely to notice is the Monarch Butterfly (Danaus plexippus). It is a large butterfly with orange-red wings veined with black and is a magnificent sight to behold as it flies gracefully over gardens and parks.

The caterpillar of the Monarch Butterfly is a colourful insect just like the adults. It is striped with the bold warning colours of black and yellow and creamy white.This is to tell would.be predators that is nasty-tasting and poisonous.

The Monarch caterpillar can only feed on species of Milkweed, which on Tenerife is usually the Scarlet Milkweed (Asclepias curassavica) that is often grown in gardens and in flower borders. This means that the distribution of the Monarch Butterfly is entirely dependent on whether this plant is being cultivated or not.

Tenerife has several types of blue butterfly and the commonly seen African Grass Blue (Zizeeria knysna) is a creature that has successfully exploited human developments. This little insect can often be seen flitting around flower beds and over lawns in the towns, cities and resorts of the island.

Los Cristianos in the south, for example, and also Puerto de la Cruz in the north, are two places this butterfly does well. The African Grass Blue's caterpillars feed on clover that grows in the lawns and when they are not too closely cropped the flowers provide nectar for the adults too.

Up on Mt Teide, right by the tourist centre, the Canary Blue (Cyclyrius webbianus) can often be seen in spring when the white-flowered broom and other wild flowers are all blossoming. This species rarely stops for long as it flies about but sometimes it will land on people attracted by the salty sweat on their skin. 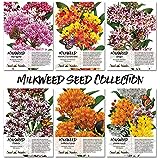 Other butterflies of Tenerife

Tenerife and some of the other Canary Islands have their own Canary Red Admiral (Vanessa vulcania), as well as its very similar cousin the Red Admiral (V. atlanta), which we often see in gardens in the UK.

Both species have caterpillars that feed on Nettles, and so they are more likely to be encountered in the cooler mountainous areas of Tenerife where the food plants can be found.

The Canary Brimstone or Cleopatra (Gonepteryx cleobule) is very similar to the British variety of Brimstone butterfly as well with its yellow wings. This beautiful insect lives mainly in the “laurisilva” evergreen forest of Tenerife where its foodplant the Buckthorn grows.

The Small Copper (Lycaena phlaeas) is a little butterfly that can be found in the UK too as well as on the island of Tenerife. This dainty butterfly's caterpillar can feed on Sorrel (Rumex species), of which there are more than one type found here.The Canary Island Speckled Wood (Pararge xiphioides), is yet another butterfly that closely resembles it British counterpart, and like it, this insect prefers shadier and cooler parts where its capterpillar feeds on various grasses.

The Painted Lady (Cynthia cardui) often migrates to the UK and European countries from North Africa. It is often seen in Tenerife where it has a choice of plants on which to lay its eggs including various species of thistles.

The large African Migrant (Catopsilia florella) was able to colonise Tenerife because two species of Senna (Cassia didymobotrya and C. spectabilis), which its caterpillars eat are often grown as ornamentals in gardens and parks of the island.

The African Migrant is large and flies rapidly over gardens and flower borders. Its females have pale yellow or creamy white wings, and the males are plain yellow.

Speaking of yellow butterflies, the Clouded Yellow (Colias croceus) can be seen on Tenerife. It is related to the white butterflies and its caterpillar feeds on various species of Vetch, Clover and Trefoil.

The Small White (Pieris rapae), well-known as a pest in British gardens, has caterpillars that eat plants from the cabbage family such as cauliflower. It is regarded as a pest on Tenerife too. It's larvae also will feed on Nasturtiums that often grow wild on the island as well as being grown as a garden flower.

The Bath White (Pontia daplidice) is very often seen on Tenerife, especially in spring, but in the UK it is a very rare migrant butterfly.

The Pandora or Cardinal Butterfly (Argynnis pandora) is a type of Fritillary butterfly. It can be seen in clearings and along pathways in the laurel forests, especially in the north of the island. Its caterpillar feeds on species of Pansy and Violet (Viola).

From this short article looking at the butterfly species found on Tenerife, and this was just a selection, it can be seen that their distribution and success is mainly down to the availability of the food plants they need. If anyone reading this wants to help butterfly conservation please consider growing plants that will benefit these beautiful insects.