The National Road and Zane's Trace Through Ohio

Connecting the Nation's Capital To the West

As with many of America's highways, travel on Zane's Trace and The National Road began along Native American foot trails. Horses followed, wagon trains came along, the railroads forged ahead, and highways for motor vehicles took charge.

The Trace and National Road meet at Wheeling WVA and leave company in Zanesville OH, the city with the interesting Y-Bridge in its downtown district. I have ridden over it several times -- one arm of the bridge was once a covered bridge for both wagons and foot traffic, but today all three branches carry motor vehicles, all arms made of concrete, stone, and steel.

The Cumberland Road was absorbed by the National Road later as the first US Federally funded roadway. The first road was built from Cumberland MD to Vandalia Ill by 1839, with an eastern extension to Baltimore MD and a western extension to St. Louis MO. Eventually, the road reached from Atlantic City NJ to San Francisco CA, but today extends from New Jersey to just outside Salt Lake City at I-80, with several Alternative US Route 40 sections along the way where the original course is in too much disrepair for travel. 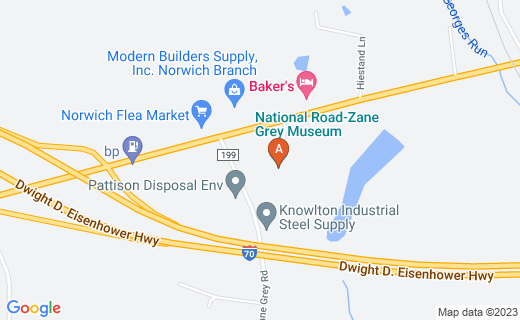 The popular National Road Museum is located at 8850 East Pike in Norwich, Ohio.

Many immigrants to America moved westward through the large Northwest Territory via Zane's Trace. This immigration included Scots, the Irish, the English, English people that had moved to Ireland and Scotland and then fled the Potato Famine(s), and a large German population.

Many of the people from Ireland and Scotland settled in Cambridge and Zanesville in Eastern Ohio, while the Germans settled in Lancaster, Millfield (site of an infamous coal mining disaster), and Athens in Southern Ohio. It is true that many of the Germans stayed in Pennsylvania and contributed their culture and customs to that state, but some moved on west and south.

From before 1700 to 1900, ancestors on both sides of my family followed Zane's Trace and the National Road, including Native Americans that followed the footpaths that their own ancestors created centuries ago.

After the American Civil War, a grandfather and a great grandfather worked on the construction of the National Road/US Route 40, the first around Cambridge OH and the second on the western half through the state beyond Columbus OH. A brief timeline of the roads follows. 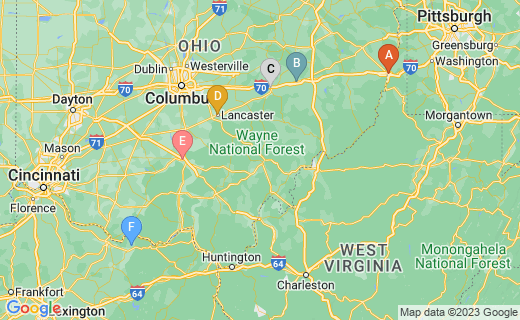 1796 - Colonel Ebenezer Zane received Congressional permission to begin work on Zane's Trace -- He had already begun the work, however, not wanting to wait. Col. Zane was completing the dream that President George Washington had stated as "opening wide our nation to the West." Ohio did become a sort of gateway westward, given the heavy use of Zane's Trace and Route 40.

Col. Zane forged his way through Wheeling W Va on the Ohio River, then southwest through Ohio to Maysville on the Ohio River again (diving off the southeast quadrant of the state). The Colonel participated in settling Wheeling W Va, Zanesville OH and Lancaster OH; all of which I have visited numerous times. The section of the Trace from Wheeling to Zanesville also became part of the National Road on which my great grandfather and grandfather worked.

1800 - The native footpath that became a wider trail under Colonel Zane became a wider road full of ruts and potholes. This is how many of the roads and highways of today's United States were formed. Builders found the footpaths, widened them for wagons and horses, built dirt roads, sometimes covered them with gravel, paved them, then saw railroad lines arise parallel to the roads. In the 1950s, the US Interstate System emerged, building parallel or atop the roads already laid. New rail lines went through the country, old roads like Route 66 and Route 40 decayed, new highways emerged, rail service declined, and highways like Route 66 began to experience reconstruction in several sections as a scenic and historic byway.

Route 40 has good and bad stretches, but is smooth and sleek past St. Louis MO, the last time I traveled it. The Columbus Dispatch ran a photo journal by famous newsman and author Mike Harden years ago, showing how the motels along Route 40 had all but ceased doing business. In the 2010s, some of them are still open and alive. The road makes for good sightseeing and the people long it are friendly and interesting. Around Springfield and north of Dayton, a traveler enters the Aviation Heritage Trail region and could spend two weeks just exploring that history between Springfield and Cincinnati, the Ohio Space Corridor.

1803 - As Ohio became a US State from within the Northwest Territory, Congress provided money to expand work on the two major roads to allow wagons to navigate the path. This is when taverns began to emerge along the roadside, followed by villages and towns. Incredibly the sophisticated and upscale Dublin, Ohio began as a wild west town during this time.

1809 - A huge German settlement inserted itself into Lancaster, complete with its own newspaper.

2012 - Not used as often as in the 1950s through 1970s, Zane's Trace is still a useful road through Southeastern Ohio. New oil and natural gas jobs from 2012 - 2022 will see an increased traffic on the Trace and the State of Ohio will invest additional money into refurbishing the road. About every two years, routes I-70, US 40 and Zane's Trace see some reconstruction.

Historically, the older senior citizens of Eastern Ohio have told for 200 years how Johnny Appleseed walked through Ohio on Zane's Trace to to Indiana along US Route 40 with his seeds. The apple orchards of today's Ohio are living testimony to that.

US Route 40, The National Road, Through Ohio 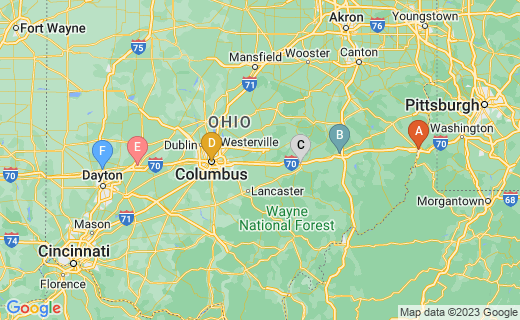 Site of the Dayton International Airport and the yearly airshow, all near Wright Patterson Air Force Base and on the Aviation Heritage Trail.