The September 11 Memorial opened as the installation "Reflected Absence" on the 10th Anniversary of the national disaster in New York City: September 11, 2011. Required free visitors' passes for 30 minutes are needed at all times to attend any visiting day and any 9/11 memorial tribute; see the website link below. Voluntary donations are accepted to help with the high cost of maintaining the memorial - $60,000,000 per year.

Already in August 2011 at the announcement of the opening, a protest group wanted the iconic steel-beam cross left standing in the Twin Towers debris to be removed from the memorial. This will likely not occur, because government opinion has been broadcast that this is a graveyard and the cross can stand as a marker to all those lost. This includes the 9/11 World Trade Center deaths, the 6 World Trade Center deaths from the 1990s attack, the Pentagon attack on 9/11, and the crashed hijacked Flight 93 from Shanksville, Pennsylvania (see material further below).

The names of all of those lost individuals from the 9/11 national disaster are engraved around the lip of the two 1-acre man-made waterfalls standing in the footprints of the World Trade Center.

In addition, unidentified human remains recovered in the debris of the trade towers are buried in respect on the site in a dedicated repository.

This is a tomb that we can visit. Further, symbols of many major world religions are formed from metal debris left at Ground Zero and are added to the memorial and the museum as they are completed. Other metals from the site have been salvaged and used to construct warships.

The two man-made waterfalls set among a new-growth forest at the memorial are powerful, understated and dramatic.

A virtual tour is available at ta dedicated website for the memorial. In person, free passes are timed at 30 minutes and the restriction may not feel like enough time to visit and meditate on the events the waterfalls commemorate.

The related September 11 Museum contains thousands of artifacts related to the national disaster on September 11, 2001 during the George W. Bush Administration. Artifacts relate to the the lost individuals in the tragediennes and their families, and opened one year after the opening of the beautiful Twin Waterfalls memorial, on September 11, 2012. At the time of that opening, a gallery of photos of the deceased from the terrorist attacks could be viewed on back-lit displays, with stories of their lives included so that America and the world will not forget these individuals.

The separate Flight 93 Memorial in Shanksville, Pennsylvania offered its dedication on September 10, 2011, the day before the September 11 Memorial opening.

A good memorial tour for those wishing to pay respects to the lost will take in the Flight 93 Memorial on 9/10 and the September 11 Memorial on 9/11, followed by the Pentagon site on 9/12. However, the three sites are worth the time to visit anytime of the year. At one point in the past, the Pentagon even had a shopping mall in its lower level; I don't know if that is still true, but 60 minute tours of that facility are gladly provided. 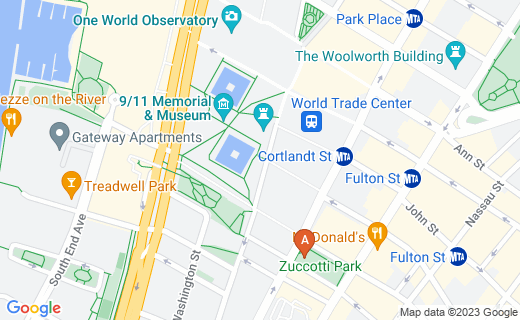 Area of the September 11 Memorial and Museum and Office.

The time-restricted passes to the memorial may create an obstacle to viewing the monument, because many of the American monuments require passes and a 30-minute is not much time. It is likely not enough to digest the display, pay respects and spend time meditating on the disaster and where it is taking the US.

This time and pass requirement includes the Washington Monument and other DC sites as well as the Flight 93 Memorial in Pennsylvania and others. Not only is public safety likely an issue, but perhaps also is the possibility of terrorists or protesters gathering at these sites in order to damage the memorials in some way or to harm their visitors. .

The Flight 93 Memorial Dedication occurred in Phase One of a permanent site from 12:30 PM to 2:30 PM. The dedication included several musical tributes, the placing of wreaths for the lost, and other tributes. Related activities lasted throughout the afternoon. In addition, the memorial offered an evening event.

Check at the National Park Service Link for updates and new events at this memorial. Phase Two included the planting of 40 separate groves of trees, one grove for each of the passengers on Flight 93.

Formal observances will occur on each anniversary of September 11, from 9:00AM to 9:00PM.

The two large silver "Bells of Remembrance", resembling the Liberty Bell, ring during the time of the crash, 10:03AM, while the names of Flight 93 crew and passengers are read aloud.

A large Field of Honor is planted at the site, filled with daisies and Queen Anne's Lace among native grasses. A wide sidewalk to the memorial is fit with benches and stone seating beside green spaces and trees. Through the gateway and visitor's shelter is a set of five rows of benches from which to enjoy the Field of Honor. The plaza along the actual crash site is fit with larger benches, but only Flight 93 families have access to the crash site, through a large stone gateway.

At dusk of each 9/11 memorial day, luminarias are lit at the Flight 93 Memorial Plaza. This will include 2,982 lights to account for every life lost in the combined attacks on September 11, 2001.

At 9:30 AM, the 10th Anniversary Memorial Service remembered the patriots on Flight 93 and the other 9/11 disaster sites. 9:30 AM is the exact time at which the passengers and crew on Flight 93 decided to implement anti-terrorist actions that stopped a major part of the terrorist attack on America on 9/11. Again, there were musical tributes, wreath placements, and other activities to fill the day.

The Flight 93 Memorial in Shanksville PA was opened for regular attendance of visitors at 2:00 PM pm Monday, September 12, 2011. The permanent gateway is located at the following address: 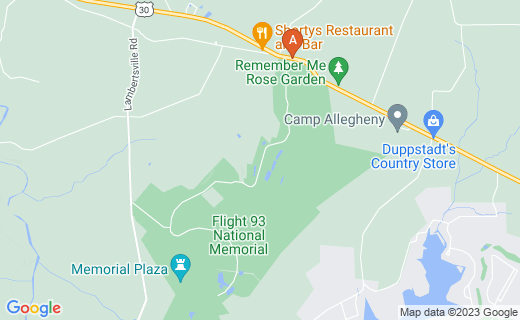