The Origins of the 'Cinderella' story.

Cinderella is arguably one of the most popular of all the Classic Fairy Tale narratives. In fact, one would be hard-pressed to find a young woman who has not at some point in their girlhood dreamed of being the ‘Cinderella’ figure - the Belle-of-the ball that is swept off her feet by a 'Handsome Stranger' and ferreted off to his ‘Castle’ to live ‘happily ever after’.

Most girls today know not only the literary story but own the video-cassette, DVD, Barbie doll, Halloween outfit and a myriad other commodity products. Indeed, how many of us as adult women have not at some point invoked the services of a ‘fairy-godmother’ or held back on committing to a perfectly good relationship because we were waiting for our ‘Handsome Prince’ – our own ‘feel-good-movie’?

As rooted in our childhood memories and cultural make-up as the ‘Cinderella’ narrative is, we do not hold the copyright to the tale. Multiple variations of the tale exist; the earliest recorded version dating as far back as the C9th AD. Transcribed in China by Tuan Ch'eng Shih, this C9th version records the story of a young girl named Yeh-Hsien. She is described as being intelligent, clever and hardworking but after losing both her parents she finds herself alone in the care of her father’s co-wife who not only mistreats her but also denies her food, drink and warmth. Yeh-Hsien befriends a magical fish that appears to her in the household pond. Enraged that Yeh-Hsien has found a source of comfort and companionship her Step-mother kills the fish. Yeh-Hsien secretly retrieves the bones from the magical fish and hides them in her room. Even in death the fish continues to help Yeh-Hsien and when she is forced to stay at home on a festival day the magical bones provide her with a cloak made from Kingfisher feathers and a set of tiny golden slippers – it is important to remember at this point that tiny feet were highly sought after in China right up until the practice of foot binding was abolished in the early C20th as a sign of nobility.

On leaving the festival Yeh-Hsien loses one of her golden shoes that is subsequently picked up and sold to a warlord. A massive search begins to find the girl to whom the shoe belongs. Yeh-Hsien makes it known that the shoe belongs to her. She ultimately becomes the chief’s wife while her Step-mother and sister are stoned to death.

In 1634, the tale makes it first written appearance in Europe in an Italian version entitled, "La Gatta Cenerentola" or ‘The Cat Cinderella’. Published by Giambattista Basile this version is vastly divergent from the tale of young Yeh-Hsien and her magical fish. Brutal and violent this tale features a cunning governess who encourages a Cinderella like protagonist to murder her uncaring step-mother only to appropriate her role, banishing Cinderella to a life of extreme hardship in which she looses even her name; hence ‘Cat Cinderella’. It is not until the German version; "Aschenputtel," recorded by the Brothers Grimm in 1812, that we begin to find a version of the story that reads closer in its depiction of character and symbolic allusion to that with which we are familiar. Although corresponding in narrative structure and layout, The Brothers Grimm version is still littered with visceral elements and symbolic nuance that predominantly accompany adult emotion and action such as jealousy, envy and rage, and as such, remains essentially at odds with the bowdlerized and sanitized version Disney portrayed to American society in1949.

It is in a French version of the tale published by Charles Perrault in 1697 that we find a Cinderella that resembles closest our own sweetly virtuous and demurely gentle Cinderella character. It is here too that we find mention of a fairy godmother and the host of small creatures that Disney appropriated and included in his version of ‘Cinderella’. Written for the aristocratic Salons of C17th French society, Perrault’s ‘Cendrillon’ is stripped of all violent, bawdy or socially moralizing material and is instead focused primarily on entertaining.

With one of the most important functions of a fairy tale being the ability to speak about taboo or unexplored subjects in an allegorical manner, it is interesting that Disney chose to use Perrault’s version. The renowned cultural analyst, Jack Zipes, talks much about this in his many writings on the ‘Disneyfication’ of folklore and fairy tale. He posits that in replacing the strong-willed, well rounded and determined female protagonist featured in so many of the older versions of the tale, many of whom undergo a journey of self-discovery by the tale’s end, Disney changes the fundamental purpose of the tale itself. While the narrative elements of the tale remain in tact, the metaphorical and allegorical elements have shifted dramatically. The tale of Cinderella is no longer an allegorical anecdote in which children are encouraged to read moral and ethical lessons into the tale instead, as Terri Windling remarks in her essay, “Cinderella: Ashes, Blood, and the Slipper of Glass”, the modern day tale appears to reduce our dreams to simplistic formulas that empower no-one. Remember Disney has his prince sweep straight past Cinderella on entering the house of her sister and step-mother with the shoe. He is unable to recognize her without her sartorial splendor and it is only once she is restored to her ballroom beauty that they are once again re-united. 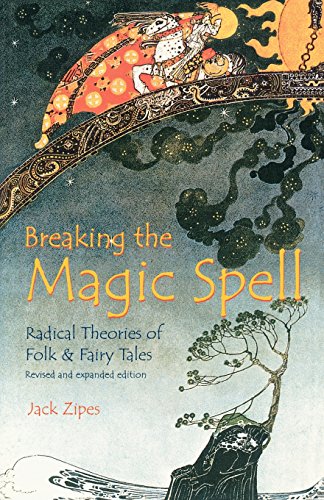 This tale of a ‘rags-to-riches’ girl bullied at the hands of her greedy step-mother and siblings; thereby winning the heart of the most sought after man in the kingdom is a narrative that we, as an American culture, have embraced, standardized and promoted as the universal formula of success in our capitalist, commodity driven society. Furthermore Disney’s proliferation of packaged products that accompany each of their Fairy Tale movies compounds this formula in that it allows young girls to transmute their desires of becoming beautiful and successful onto the commodity product thereby removing any culpability or autonomy.

The Cinderella narrative has a long and profoundly rich history which I believe to be as, if not more, enchanting and engaging as Disney's animated characters and seductive fantasy worlds. As adults we should be encouraging our children to understand that stories of all kinds have many origins and numerous meanings. What better way than to expose them to the myriad versions of their favorite tale. Go on, you can begin today.