A Lifetime Ago For Surviving Veterans

We salute America's Veterans as we celebrate December 7, 2011 as the 70th anniversary of Pearl Harbor Day, but pay special respects to our WWII Veterans and those of our Allies. The 70th commemoration is the Platinum Anniversary, while the Pearl Anniversary will be the 80th year celebrating the memories of the past event.

Currently, 740 surviving US Veterans of the Second World War die every day. The US Veterans Administration reports that of 16,000,000 who served the US in the war, we have 1,700,000 living, decreasing at the daily rate. The 70 years past is a lifetime for many people and these veterans are in largely their 80s and 90s. Those who claimed an older age in order to serve as youngsters of 14 and who survived to 2011 are in their middle 80s. Despite the decades intervening, these individuals will never forget December 7, 1941 and the Japanese attack on Pearl Harbor, Hawaii.

At the current rate of death among this group of veterans, the last survivor is scheduled to pass in 2298 days or a little over 6 years from today - sometime in 2017. That is an incredible 99 years after the end of World War I, which was to end all wars, but did not.

The Pearl Harbor Survivors Association is commemorated with a website, operated by the survivor themselves, many of whom are aging past 100 years of age.

The oldest U.S. military survivor of the Dec. 7, 1941 attack on Pearl Harbor that plunged the United States into World War II - Ray Chavez - has died at age 106.

At 11:00 AM on December 7, 2011 a ceremony for survivors and those who gave their lives at Pearl Harbor will be held at the USS Arizona Memorial and World War II Valor In the Pacific National Monument in Hawaii. The commemoration's title for 2011 is Enduring Legacy.

The sunken battleship lies as a symbol of the attack against the United States, located in the water beneath the memorial building, where visitors may view it from the memorial's airy viewing area above. US Navy White Boats ferry visitors from shore to the memorial building, where they view a film about the site and event, view a model of the memorial complete with sunken ship, and view the battleship itself. The Shrine Room is exquisite in its architecture and lighting, displaying the names of US Sailors and Marines that perished on December 7, 1941. Additional small memorials to other ships on site that day are offered as well.

This Platinum Anniversary of the Pearl Harbor attack may constitute the last large commemoration ceremony at the memorial on the anniversary date. Usual remembrances include honor guards, speakers, presentations, recognitions, music, wreath laying, tours, and several other agenda items. Groups of all ages from across the nation attend these commemorations and pay their respects to the survivors that attend..

The survivor's association leadership has stated that because of advanced age and declining health, increasingly fewer of our WWII survivors are attending this and other yearly remembrance ceremonies.. In our digital world, ceremonies might be broadcast via the Internet and family representatives could attend such ceremonies in the future as the events are broadcast home, but this has yet to be considered.

Views of the Pearl Harbor Survivors

Howard Bakeman (1918 - 2013) was from Mobile, Alabama. He personally attended every Pearl Harbor Day remembrance in Hawaii and as many military funerals and similar events as possible. His reason, he said, is that he felt an obligation to remember publicly the sacrifices of those service people who did not survive. This is remarkable determination.

For the 2011 event in Hawaii, Mr. Bakeman reported only three survivors were scheduled to attend in person. Sources in the news stated that as many as 120 would be present. Even though the survivors' association is disbanded across the country, Pearl Harbor Survivors that continue to live can participate in their local annual commemorations of the event, if they choose.

While some middle and high school texts may indicate that Pearl Harbor was the sole site of attack in 1941, several other locations in the Pacific were also bombed by Japan.

These places are Guam, Malaysia (then called Malaya), Midway Islands, the Philippines, Thailand and Wake Island.

All of the places surrendered to the Japanese from within a few hours to early in 1942, except Hawaii and the Midway Islands, who maintained independence. See the map below for the location of these attack sites.

In addition to these land sites, the Japanese bombed two major British battleships in the Pacific, effectively crippling the British Navy in that region.

At Least 7 Sites Were Attacked 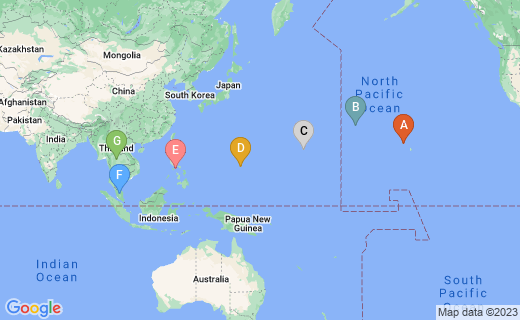 Philippines held their own until January 1942, when they fell to Japan.

Succumbed to Japan in just hours.

This 70th anniversary is special in a larger way than any previous anniversary in recent decades. In the past, WWII Veterans of both Japan and the USA met in Japan to remember the war and to work through sad memories of loss. In 2011, the Patriotic Education Travel Program (founded 2009) received greater media play as it joined American WWII Survivors with college students and high school students studying the war on a historic field trip back to Pearl Harbor, Okinawa, and Hiroshima.

Bill Muehleib, himself in his late 80s, is National President of the Pearl Harbor Survivors Association. He reports an estimated 8,000 survivors of Peal Harbor still living.These individual are living caches of history and as many as possible are honored by the Patriotic Education Travel Program. They are hosted in the field trip and speak to students about their experiences in WWII, for which the college students are profoundly thankful.The students raise their own money for the trip and pay for the veterans and as many of the veterans' wives as possible.

Some of the college students going on these trips on December 7 and throughout the year are themselves US Veterans of the wars in Afghanistan and Iraq. This has been the opportunity for different generations of veterans to share their experiences and honor one another.

The Young Marines is another outfit that goes to Pearl Harbor for 2011. They are nearly 300 members in the age range of 8 to 18 and they want to honor the Pearl Harbor Survivors.