How Agriculture was Invented During the Stone Age

Katie graduated with both a BA in Chemistry from BYU and a BA in Spanish from UVU in 2016. She graduated from medical school in 2020.

Although its name doesn't suggest it, the Stone Age was an important time of development for mankind.

In order to simplify discussing this lengthy period of time and its significant developments, the Stone Age has been divided into two parts: the Old Stone age and the New Stone Age. We'll follow this convention and begin our discussion with the Old Stone Age.

The Old-stone age, also known as the Paleolithic era, occurred from about 2.6 million to 10,000 years ago.

It began when Australopithecus, a human ancestor, made the first stone tool and ended with the agricultural revolution.

During this time, people were hunter-gatherers or foragers. They lived a nomadic lifestyle and followed big game and other sources of food.

We know basic forms of communication must have been possible, because the men worked together to hunt large animals and bring their carcasses back to their families.

Although we believe that these nomads followed specific gender roles, gender inequality seems to be a concept of more modern invent. While meat from the hunt was the most coveted food, the gathered food may have consisted of up to 80% of these peoples’ diets. It also sustained the community when the hunt was unsuccessful.

Their populations were limited by their lifestyle. These people stayed with extended family for hunting and protection, but had to stay in small enough groups that the land could support them. Luckily, pregnancy and nursing would take 3-4 years with each child, which meant there were 3-4 years between subsequent births. Unfortunately, there is evidence that these peoples resorted to infanticide as a means of population control.

Tools of the New Stone Age

A number of peoples began transitioning from the nomadic foraging lifestyle, to an agrarian lifestyle between 10,000-15,000 years ago.

It is believed that women were the “inventors” of agriculture, as they began applying observations to their gathering in order to maximize their returns. Plant varieties were chosen for their nutritional value and ease of production, and locations were chosen based on their favorable growing conditions.

These important lifestyle changes mark the beginning of the Neolithic or New Stone Age.

Women began to make textiles that provided warmth and clothing with sewing needles were fashioned out of animal bones.

People learned to work with copper to make jewelry and tools. And, pottery and cave paintings became larger and more common as peoples stayed in one place longer.

As a result, people began congregating in groups that allowed them to trade and work together. This led to the construction of the first cities and the origins of urban life.

Where Agriculture was "Invented" 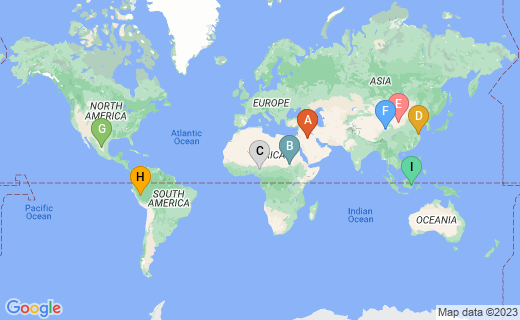 The "invention of agriculture" did not occur in one place and spread. Agriculture was actually developed in a number of places before spreading. Some of these places include: