The Prophetess Cassandra in Greek mythology

Divination and prophecy were important abilities in Ancient Greece, and the Oracles and Sibyls were in constant demand. This demand led to temple sites at places like Delphi and Dodona, and these temple sites became important and very wealthy; and behind the Oracles of the physical world was a whole range of mythological stories.

In early Greek mythology, the Oracles had been associated with deities such as Gaia and Phoebe, but in later times, the role of these early goddesses was supplanted by Apollo. Apollo was noted for bestowing the gift of prophecy on others aside from the Oracles though, with the most famous story being that of Cassandra.

Whilst the Oracles were a success story, the prophetic ability of Cassandra only led to death and destruction.

Cassandra was a mortal who was born into the royal house of Troy, as her father was King Priam, and her mother Queen Hecuba. Cassandra was the twin sister of Helenus, but also sister to many other notable mythological figures, including Hector and Paris; King Priam was recorded as having 50 sons, and an unnamed number of daughters.

Cassandra is also sometimes referred to as Alexandra.

As Cassandra grew up, she quickly became regarded as being the most beautiful of all of King Priam’s daughters, a fact which would quickly bring her to the attention of the male Olympian gods.

Apollo Gives and Takes Away

In Greek mythology, there are two distinct stories told about how Cassandra came to be able to predict the future.

The most famous tale tells of how Apollo, who had observed Cassandra’s beauty, set out to seduce the Trojan princess. To help with the seduction, Apollo offered Cassandra the gift of prophecy. Cassandra willingly received the gift offered by the god, but when Apollo started to make sexual advances, Cassandra shunned him.

In retribution, Apollo did not simply take away the gift that he had bestowed, but cursed Cassandra instead. Cassandra would always be able to predict the future, but from then on, her predictions were never to be believed.

In this version of the story Cassandra teaches her twin brother Helenus the gift of prophecy; Cassandra was such a good teacher that Helenus’ predictions would always be correct, but unlike his sister, Helenus was destined always to be believed.

Later on Cassandra would reject Apollo, and the god would curse her in the same way that occurs in the most widespread version.

The Rape of Cassandra

The beauty of Cassandra of course also attracted mortals, but they like Apollo were rejected. Telephus, a son of Heracles, was one such suitor, but whilst Cassandra rejected him, she did show some consideration, and helped Telephus to court and wed Laodice, Cassandra’s sister.

Cassandra During the Trojan War

Cassandra is most famous for events surrounding the Trojan War.

Cassandra is occasionally said to have predicted Paris’ role in the downfall of Troy, proclaiming that when the son of Priam is born he should be killed. This story is more closely associated with Aesacus, Cassandra’s half-brother, who could interpret dreams.

More commonly Cassandra is said to have prophesised the downfall of Troy when Paris returned to the city with Helen in tow. Generally though Helen was welcomed to the city, and the prophecy of Cassandra ignored.

Of course the Trojan War commenced, and fighting ensued for ten long years. Eventually the ruse of the Wooden Horse was devised, and left by the Achaean forces outside of the city of Troy. When the Trojans went out to look at the horse, Cassandra told them what would happen if the horse was taken into the city, but just as Apollo intended, her prediction was ignored. Thus, the Wooden Horse was taken into Troy, and the Achaean soldiers inside would take the city.

During the sacking of Troy, Cassandra sought sanctuary inside the temple of Athena, but there she was discovered by Locrian Ajax, Ajax the Lesser. In the temple Cassandra was raped by Ajax, one act of sacrilege which would have a devastating impact on the journey home for many Achaean heroes. 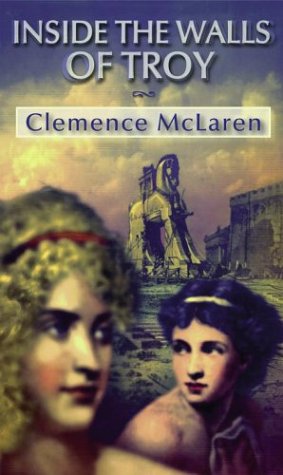 Inside the Walls of Troy: A Novel of the Women Who Lived the Trojan War
Buy Now

The Death of Cassandra

Once Troy had fallen, the spoils of war were divided up amongst the surviving Greek heroes, and as was befitting for his position of the Achaean forces, Agamemnon took Cassandra as a prize. The pair would then set sail for Mycenae. Cassandra would give birth to twin boys by Agamemnon, Teledamus and Pelops.

Despite being a forced concubine, Cassandra tried to warn Agamemnon about the fate that awaited both of them at the hands of Clytemnestra, Agamemnon’s wife, and her lover Aegisthus. Agamemnon of course ignored the prophecy, and so upon his return to Greece, he, his concubine and their two sons were killed.

Cassandra is said to have been judged worthy enough to spend eternity in the Elysian Fields, the paradise of the Greek afterlife. Thousands of years later, Heinrich Scliemann would excavate at Mycenae, and having found the burial of a woman with two infants, would proclaim that he had found the final resting place of Cassandra.