If you read my article about the historical Robert Roy MacGregor, you know I’m into Scottish history. I’ve always liked the movie Braveheart, which is about another highland hero, William Wallace. After researching my family tree, I discovered a connection to Wallace. My maternal grandmother was a Kilpatrick, and the Kilpatricks hail from Scotland. The Kilpatricks were a major sept of the Colquhoun clan of Dunbartonshire, and they were also a sept of the Douglas clan. Roger de Kilpatrick fought with both William Wallace and Robert de Bruce for Scotland’s independence from the English.

Little is known about the birth and early life of Wallace, but it’s believed that he was born around 1270 in Ayrshire. Is father, Sir Malcolm Wallace, was Lord of Elderslie and Auchenbothie. Sir Malcolm was a knight and a landowner. William’s mother was most likely the daughter of Ayr’s sheriff.William had an older brother named Malcolm, and as the titles and lands were bestowed upon the eldest son, William received neither from his father.

William grew up near Stirling, under the tutelage of his uncle, a priest. He was undoubtedly taught battle strategies and swordsmanship as a youth, but it’s widely held that William was learning to become a priest.

In 1286, Scotland’s king, Alexander III, was killed as the result of a fall from his horse. Alexander had fathered three children, but they had all died before he did. He had named his granddaughter, Margaret, as his heir. Margaret lived in Norway and was on her way to Scotland to be crowned when she died in the Orkney Islands. As a result, there was no obvious heir to the throne of Scotland, and thirteen nobles came forward to claim it.

During this time, Scotland was in a state of great upheaval. The noblemen who served as Guardians of Scotland fought among themselves and sometimes aligned themselves with King Edward I of England, who was called “Longshanks.” Little was done to protect the common people or to maintain order.

Also at this time, English troops occupied much of Scotland. The Scottish commoners were often abused by the soldiers, and the Scottish aristocrats rarely intervened. When Wallace’s father was killed in a skirmish with English troops in 1291, William’s desire to rid his land of the English escalated, ultimately branding him as an outlaw.

William was a fierce opponent. He supposedly stood six foot six, which made him a giant among other men at the time, whose average height was just over five feet. John Donald Carrick, in Life of Sir William Wallace of Elderslie, describes Wallace:

“His visage was long, well proportioned, and exquisitely beautiful; his eyes were bright and piercing, the hair of his head and beard auburn, and inclined to curl; that on his brows and eyelashes was of lighter shade. His lips were round and full. His stature was lofty and majestic, rising head and shoulders above the tallest men in the country. Yet his form, though gigantic, possessed the most perfect symmetry, and with a degree of strength almost incredible, there was combined such  an agility of body and fleetness in running that no-one, except when mounted on horseback, could outstrip or escape from him when he happened to persue.”

“All powerful as a swordsman and unrivalled as an archer, his blows were fatal and his shafts unerring: as an equestrian, he was a model of dexterity and grace; while the hardships he experienced in his youth made him view with indifference the severest privations incident to a military life.”

According to these words, William Wallace seems like the perfect fighting machine of the historical period! Anyway, back to the story at hand: Since the nobles could not decide among themselves who should be king, they asked King Edward I for his input. The choices for king of Scotland were narrowed down to three men: John de Balliol, Robert de Bruce, and John de Hastings. Ultimately, Balliol was chosen.

Longshanks, however, had a secret agenda. He wanted a Scottish ruler that he could control. When King Edward demanded that Balliol accept a military post in England’s war with France, along with the demand that three Scottish castles be turned over, Scottish rulers turned against England.

A five-month long war ensued between England and Scotland. When Longshanks won, he imprisoned Balliol and declared himself the ruler of Scotland. Needless to say, Scotland was not happy about this. There was widespread chaos and hatred for the English. Skirmishes were breaking out all over the countryside. When one of these skirmishes resulted in Wallace’s killing of several English soldiers in Ayr, he was imprisoned and held without food. Local villagers rescued him and fed him, however, and he joined with other rebels to overthrow the English.

In 1296, Wallace and his army invaded northern England and had success in numerous small battles. When he returned to Scotland the next year, he was knighted and was proclaimed ruler in Balliol’s stead. Most of the commoners and knights gave their full support to Wallace, but the nobles offered him little support.

Wallace vs. Edward I

William Wallace killed one of King Edward’s knights in retaliations for his father’s death, thus making a sworn enemy of Longshanks. In 1297, Wallace and his men killed 5,000 English soldiers at the Battle of Stirling Bridge and captured StirlingCastle.

In July of 1298, King Edward’s army of 90,000 men marched to Falkirk, where they battled with a smaller force led by Wallace. Nearly 10,000 Scots were killed in the battle, and Wallace retreated to the forest. He gave up his guardianship role soon after and was succeeded by Robert de Bruce and Sir John Comyn.

Longshanks re-captured StirlingCastle in 1304, and almost all the Scottish nobles swore fealty to Edward. Even so, Longshanks continued to pursue Wallace, and in August of 1305, Wallace was captured when a Scottish knight betrayed him to the English.

Wallace had been charged with treason to the crown, and shortly after his arrest, he was executed. He was dragged and beaten, and was then hanged by the neck until almost dead. At that time, he was cut open and his bowels removed. They were burned as he watched. He was then beheaded and quartered. His limbs were sent to different parts of the kingdom, and his head was placed on a spike on LondonBridge so that traffic on the River Thames could view it.

King Edward felt that with Wallace’s death, the Scottish rebellion was quashed once and for all, but the savage execution of the fallen hero actually had the opposite effect. All of Scotland was outraged at Wallace’s cruel treatment, and the effort for independence from England was renewed. And this time, the nobles were involved, too. Led by Robert the Bruce, Scotland won her independence, and in 1306, Robert was crowned king.

As for King Edward I, he marched north in an effort to reclaim Scotland, but he died on the way there, in July of 1307. He was buried in Westminster Abbey on October 27th. 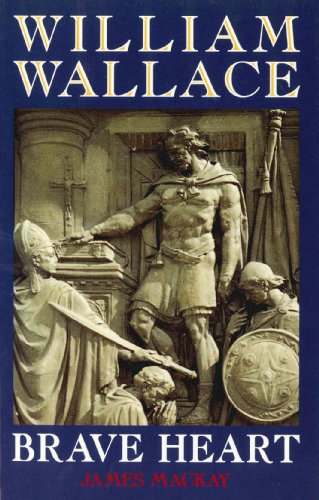