Why was the Succession of the House of York Contested?

Most people believe that the bloody English civil war, The Wars of the Roses, was fought because the Lancastrian King, Henry VI, was unfit to rule due to mental instability. Secondly, it was because Richard of York had a stronger claim to the throne under the inheritance guidelines commonly called the law of primogeniture. In Part one of this article, primogeniture is explained using an example everyone is familiar with, the Tudor line of succession. While presenting the House of York's line of succession, some troubling issues arose that required further examination. These issues have never been addressed, to my knowledge, so a reexamination of the root cause for this conflict has never been fully understood. In order to maintain the primary topic for this article, we will continue, first, with the York line of succession..

We left off with the list of Edward III's children and we will examine how primogeniture was a method for passing authority down from one ruler to another in a smooth, orderly manner. This was probably designed to avoid the candidates fighting over who would assume the reins of government. In any society, a seamless transfer of authority is in everyone's best interest. 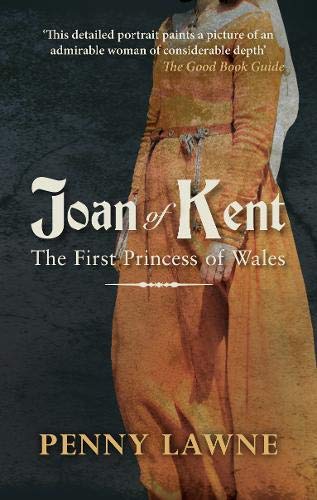 Joan of Kent: The First Princess of Wales
Buy Now

The House of York's Superior Claim to the English Crown

This is where the first article, on the combined questions and answers as to why Richard III's DNA did not match the surviving Plantagenet Y chromosome, and how this fact, while intriguing, was irrelevant in regards to his absolute right to be King Richard III of England. (the usurping of his nephews excepted) under the laws of succession that existed from the time the Normans invaded England and conquered the Bretons, Scots, Irish, and the Welsh peoples.

We left off on the York line of descent examining the succession starting with Edward III's children to make it easier to follow.

Edward III's children are as follows:

We are, of course, starting with the male line of descent that follows the order of birth, whether the first male had any children, and then repeats the same pattern, male heirs in order of birth, then female heirs, in the order of their birth. (To follow this, it is advised that you read Part 1 using the Tudor succession that everyone is familiar with as a guide.)

As noted above, Edward, the Black Prince was the first born son and heir apparent to his father, Edward III. He married Joan Holland, the widow of John Holland, who had children from her previous marriage. Since this bears heavily on the later usurpation of the crown by Henry of Bolingbroke Castle, son of the third born son, John of Ghent, (often mispronounced as Gaunt... the 1st Duke of Lancaster.) Edward and Joan were closely related, as she was first cousin to Edward III, her father-in-law. What little we know is that Joan initiated the relationship. She was known for her exquisite beauty, and, no doubt, would have had another marriage arranged for her by her cousin, Edward III, had she not approached Edward, the Black Prince with a marriage proposal. History tells us that Edward's father, Edward III, and his mother, Philippa of Hainault tried to discourage the marriage for several reasons. Reading the various accounts, it appears that their first objection had to do with Joan, herself. Secondary, no one liked her sons from her first marriage, John Holland and his brother, Thomas Holland. Edward, the Black Prince, was smitten with her beauty and her apparent love for him, so he could not be swayed. A dispensation from the Pope would have been required for the marriage because of consanguinity.

Edward and Joan had one surviving son:

Richard did not have any children. He did, however, have several half siblings, from his mother's first marriage. As with the Tudor example, children who did not survive childhood are omitted for simplicity. Joan's children from her first marriage are as follows:

A reminder, the Holland side of the family was NOT in the line of succession. Also, since Richard III and his family claimed the throne through the line of Lionel of Antwerp, that is the only line that will be addressed in this article.

Did the British Royal Family Almost Have a House of Mortimer Dynasty? Second Son, Lionel of Antwerp

The next son in the line of succession was Edward III's second son, Lionel of Antwerp. This ancestor of Richard III is the one that gave the House of York their greater claim to the throne and the crown than the Lancastrian claimant, Henry IV of Bolingbroke. The Lancastrians were descended from Edward III third eldest son John of Ghent, Duke of Lancaster. John was the Regent for his nephew, Richard II, as he ascended the throne at ten years of age. (Unlike the Princes in the Tower, Edward and Richard of York) Richard II survived to adulthood.

Lionel of Antwerp would have been king after the death of Richard II, but Lionel was poisoned by person or persons unknown in 1368. His only child was a daughterl, Philippa, named after his mother. As Philippa was an orphan and a minor, she was required to have a guardian. This was a tremendous opportunity for whoever was appointed. Philippa's guardian chose the husband for the 14 year old ward. Since Philippa was both an heiress and first in descent to the throne after Richard II, her hand was much in demand. Philippa was married to Edmund Mortimer. (The Mortimers, as a family, will be looked at in a later article) Edmund Mortimer seemed an odd choice for such a momentous union. After all, she was the heir apparent to Richard II, so any children she had would be in the next immediate line of succession to the throne. Edmund Mortimer died in 1378, Philippa Plantagenet died in 1382.

Philippa and Edmund had four children:

Roger Mortimer was the only viable heir. As he was six years old when he was orphaned, he, too, became a ward of the court, over which Richard II reigned. While Philippa's inheritance netted Edward III 4ooo pounds a year. Richard II, at his mother, Joan Holland's suggestion, appointed Joan's son, Thomas Holland, by her first marriage, as guardian to the new heir presumptive. Richard II received several thousand marks a year from the estates held by Thomas Holland. When it was time to choose a wife for young Roger, Thomas Holland chose his own daughter, Eleanor Holland. That brought Thomas Holland's future grandchildren into the line of succession.

The Infamous Roger Mortimer Who Murdered Edward II and Slept With his Wife, the Queen

British Royal Family: The House of Mortimer and the Line of Succession of the House of York

Roger Mortimer and Eleanor Holland, (Eleanor being the half niece of Richard II, and the granddaughter of Joan Holland, widow, now, of both Thomas Holland Senior and Edward, the Black Prince) had the following children:

Richard II was deposed in 1399. By the year 1399, the second son of Edward III. Lionel, had died, his daughter, Philippa, had died, Philippa's son, Roger Mortimer, had died. Roger Mortimer's son, Edmund Mortimer, was a child, just eight years of age. Edmund Mortimer's father, Roger Mortimer, had died in 1398, before the death of Richard II. This sequence can be summarized as Edmund Mortimer, a child, who was the great-great-great-grandson of Edward III, is the only heir apparent following the laws of primogeniture. Edmund Mortimer is descended from the female line, so, interjecting modern science into the succession means that he would carry only the X maternal chromosome, not the paternal Y chromosome. Henry of Bolingbroke Castle, who usurped the crown, carried both the X chromosome and the Y chromosome. Henry was a Lancastrian, the legitimate son of John of Ghent (Gaunt) who was the legitimate third surviving son of Edward III. That makes King Henry IV the grandson of King Edward III. Who was the rightful heir? It is clearly Edmund Mortimer, who, at the tender age of eight, should have been crowned King Edmund I of the House of Mortimer or the House of March, as he was the fifth Earl of March. A more practiced form of inheritance, from earlier times when a King was required to fight to defend his kingdom, This form of primogeniture had the succession only through the male line for practical reasons. The fact that Henry IV was a more direct descendent of the Plantagenet line, he carried both the Y and the X chromosomes, so, genetically, Henry the IV was the most qualified successor. Edmund of Mortimer, although only a Great-Great-Great-Grandson, and carrying only the X chromosome, was the legal, rightful heir to the throne.

The Bones of a King: Richard III Rediscovered
Buy Now

"According to some accounts, shortly after the rout of the Lancastrians at Tewkesbury, a small contingent of men under the Duke of Clarence found the grieving prince near a grove, and immediately beheaded him on a makeshift block, despite his pleas". Paul Murray Kendall, a biographer of Richard III, accepts this version of events.[5]

This is a direct quote from Wikipedia.

If a king becomes mentally unfit to rule due to mental disease, should he still be allowed to rule or should he be deposed by someone relatively sane?