The Role of "Buffalo Soldiers" in the Native-American Wars

An Honorable Name for Black Soldiers

Buffalo Soldiers received their nickname as an honor from Native Americans for several reasons. The easy reason is that African American hair and coloring resembled that of the American bison (Scientific name: Bison bison ); these similarities likely indicated a relationship.

The soldiers in question also wore buffalo robes over their uniforms in the winter while on horseback patrol. Further, both the bison and the African American soldier showed bravery and fought fiercely with honor, especially when cornered. Any regiment of these Black soldiers was known to be as powerful as a herd of buffalo.

Cathay Williams. A few American women have disguised themselves as men to go to war, to drive stagecoaches, and to tackle other all-male occupations up to about the middle of the 20th Century.

In the buildup to the war, throughout the war, and afterward, Blacks found themselves fighting whites, Chinese on both sides, Native Americans (some of whom had been friends) on both sides, and other Blacks. The period from 1838 - 1900 was hard to survive, but hardships obstructed them and their descendants for over a century past that time as well, even to today.

Buildup to the Indian Wars

At times, African Americans found themselves fighting against Native Americans in the "Indian Wars" that spanned a period of time extending from the Indian Removals circa 1838 before the War Between the States through Reconstruction to the end of the 19th Century, when they reached their highest frequency. The Buffalo Soldiers' military units existed specifically as all-Black regiments from 1866 - 1951, but some texts refer to all Black military people in the US and the 13 Colonies as Buffalo Soldiers.

Serving in 177 battles and skirmishes, Buffalo Soldiers earned the respect of our Native Americans, who placed them in esteem equal to that of their revered American bison herds.

Although highly respected and honored by North American Indigenous Peoples, racism and extensive hardships confronted the Buffalo Soldiers in their work after the Civil War in the newly specialized all-Black 9th and 10th US Cavalries. The 38th, 39th, 40th, and 41st US Infantries were also all-Black, and combined to later form the 24th and 25th Infantries, who also worked hard in difficult positions.

The final four all-Black post-Civil War regimental units, the 9th and 10th Calvary's and 24th and 25th Infantries, were employed in peacetime, but were required to fight Native Americans.

Indian Removals: Routes Through the Trail of Tears

Buffalo Soldiers Fought Native Americans In and Between Montana,Texas, New Mexico, and Arizona 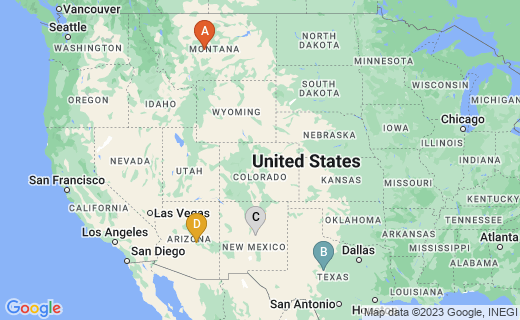 At the start of the Civil War, the American government had been fighting Native Americans in the Western Territories and states for several years, beginning around 1838. After the war, the Black soldiers were sent west in order to preserve the post-war labor market in the South, North, and East for whites, and the Native Americans that had married some of them.

African American soldiers were glad to have the opportunity of military work with its promises of pay, education, medical services, and military pension.

During the Indian Wars, the Black soldiers fought for and protected telegraph lines, railroad lines and depots, Stagecoaches and their stations, the US mail, hotels and saloons, other town businesses, arms and ammunition deliveries, homesteads, frontier towns, white settlers, civilian Blacks (e.g. cowboys and railroad workers), and allied Native American groups. They fought hostile Native American groups as well as cattle rustlers, bandits, bootleggers, Mexican soldiers, gun runners, horse theives, and any number of other foes, including some of the people they were to protect. At times, battle was confusing, because of the different native groups involved and some white men that disguised themselves as "Indians." The identity of the enemy was not always clear.

The Buffalo Soldiers were also put to work building frontier forts in the American West and the 10th Cavalry built and rebuilt four forts total. However, they were not usually permitted to use the structures for shelter - these forts were for white soldiers. However, at Fort Concho, separate education rooms were maintained for whites and Blacks and the color line began to blur.

The Buffalo Soldiers fought dozens of groups from different Native American Nations. Some of the natives were attacking forts, farms, and other settlements in the West; but, different nations fought each other as well. The soldiers were fighting any group of natives that their commanding officers assigned to their Troops. Some of the fighting lasted until 1924 (see link to list of battle engagements above). Overall, 20 soldiers of the 9th and 10th Cavalries received the Medal of Honor during the Indian Wars.

Mexicans and South American Natives in America and some escaped slaves became cowboys in the Old West. Evidence in my family history and related stories indicates that relatives who headed West from NYC after landing in America in the early 1800s saw these and white cowboys as they traveled to Arizona and California. They saw Blacks, Chinese, and Native Americans working on the railroads headed west and some of my ancestors likely worked on them as well.

The Buffalo Soldier Troops of the 9th and 10th Calvaries guarded all of these workers from robbers and hostile natives, plus the rail offices, trains, and passengers from 1866 - forward; and, as "colored Troops" in the earlier 1800s. The success of the American Railroad owes much to the Buffalo Soldiers.

A wave of my ancestors that arrived in the New World in the 1600s saw Native Americans - largely Iroquois - some of whom married the British and some Colonists. Some of these intermarried "Indians" were good at running businesses and even owned slaves, complicating the Civil War Era even further for the Buffalo Soldiers and for everyone.

Motto of the 9th US Calvary:

Motto of the 10th US Cavalry:

Before the United States had a National Parks Service and systems of National parks, forests, monuments, scenic byways, waterways, beaches, wildlife refuges, wetlands, and other installations, the Buffalo Soldiers served as park rangers in California parks.