In 1852, something extraordinary was discovered hiding in plain view in the churchyard of St. Paul's Cathedral, London. A stone panel was found and was subsequently dated to the early 11th Century [1].

Nearly a thousand years old, it was astonishing to find this tombstone in such good condition considering the ever-moving progress and development of England's capital city.

Believed to have come from a stone sarcophagus or casket, it soon became apparent how precious this find was. The stone was decorated with runes and a Ringerike style design, seldom seen out of Scandinavia.

The central decoration of the slab depicts a stylised four-legged beast, tangled up with another creature. The scene has been described as a reproduction of the lion and snake motif found on the Jelling Runestone in Jutland, Denmark.

Whilst this might be the correct identification, the image makes me think of a stag being pulled down by a pack of hunting dogs or wolves, as if depicting a hunting scene.

The beast seems to have clawed feet and sharp teeth, so perhaps it is even some sort of dragon?

What do you think the scene depicts?

The stone matches limestone that was quarried near the city of Bath, 115 miles west of London.

Along the left side of the panel, runes are inscribed that read:

"Ginna and Toki had this stone set up"

The runes themselves would be emphasised with red paint, the colour chosen for it's magical and sacred properties; red being the colour of life-blood.

It is hypothesised that Ginna may have been the widow, and Toki the son, of the dead man, whose own name is now missing from the slab [3].

So What's it doing in London?

Whilst we can never know for sure, it is likely that the stone was erected by the grieving family of Norse settlers who followed Cnut the Great.

Cnut, better known as King Canute, was ruler of Denmark, Norway, and part of Sweden. His Empire grew when, following years of battle and dispute, he became King of England, where he ruled from 1016 until 1035.

This period marked a really big transition in British history, as the Heathen gods of the Norse and Anglo-Saxons were being pushed aside by the arrival of Christianity. Cnut himself was Christened, and took the name Lambert. It is quite possible that he converted to gain power and supporters. Still, he was happy for his skalds to include references to the Heathen gods and way of life in poetry recording his deeds.

During this period, we see many documents including an interesting blend of Heathen and Christian references, and the St. Paul's Tombstone is another way this mix appears; Heathen art and runes, placed in a Christian burial ground.

The act of erecting a stone to a deceased loved one is something that has been done for centuries, and in marking graves in this modern age, we are just continuing a tradition that our ancestors carried out long before us.

Flesh withers, but stone remains. It is such a shame that this man's name has been lost from the runic inscription.

Visiting the Museum of London

Opening Hours:
The Museum of London is open daily from 10.00 - 18.00, including Bank Holidays. The museum is closed on Christmas Eve and Christmas Day.

Visit the museum's website for details of live events and special exhibitions.

Facilities:
The museum caters for all levels of mobility. Wheelchairs, powered scooters, and portable induction loops can be borrowed from the Museum during your visit. Guide dogs are allowed. There are toilets on every floor, including family facilities. The museum has a shop and cafe. However, parking is limited, with only a small number of Disabled parking bays available. It is best to reach the museum by public transport. 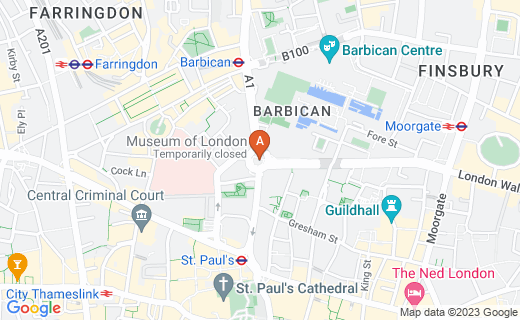 The Museum of London is within easy reach of the Tube network.