The Story of Pygmalion in Greek Mythology

The name Pygmalion, is today, most closely associated with the title of a play written by George Bernard Shaw in 1912. The name of this 20th century play, and the plot of the play, can be traced back thousands of years though, back into the stories of Greco-Roman mythology.

Pygmalion Works on his Statue

The Story of Pygmalion in Greek Mythology

Pygmalion is briefly mentioned in the Bibliotheca (Pseudo-Apollodorus), where a figure by that name is King of Cyprus, father of Metharme, and possibly grandfather of Adonis.

Generally speaking, the Bibliotheca only briefly touches on known myths, and the complete story of Pygmalion is generally taken from the Roman poet Ovid’s work, Metamorphoses. The relatively late narration of the story though, doesn’t prevent the story of Pygmalion being known as a Greek myth.

Ovid writes of Pygmalion being a talented sculptor living on the island of Cyprus, near to the city of Amathus.

As with many great artists, Pygmalion was far more interested in his work than the world that existed outside his studio, and over time he came to despise people. In particular, Pygmalion chose to reject all women; this rejection was a result of Pygmalion observing the Propoetides, the daughters of Propoetus, prostituting themselves in Amathus. The Propoetides had been punished by Aphrodite (Venus, as named by Ovid) for refusing to acknowledge the goddess’ divinity.

Distancing himself from the outside world, Pygmalion would put all of his time and effort into his work, and as a result, Pygmalion became known for creating the most intrinsic and beautiful statues of anyone.

Pygmalion put most of his effort though into one statue, a statue crafted from a perfect piece of ivory. Day and night Pygmalion would work, until the sculptor had crafted a woman with the perfect female form.

Pygmalion put so much effort into his sculpture, and spent so much time with it, that he found himself falling in love with it, and the sculptor would end up dressing it in the finest of clothes, and adorning it with precious jewellery.

Aphrodite heard Pygmalion’s prayer, and so decided to visit the sculptor’s studio, to look at his creation. The goddess was rightly impressed with the work, and deciding that the statue even bore a resemblance to herself, granted Pygmalion’s wish. Thus, when Pygmalion returned from the temple, he found that his creation was no longer a beautiful sculpture, but was a beautiful woman.

Pygmalion and his creation were married, and Aphrodite continued to favour the pair, for Pygmalion became father to a son, Paphos, the founding father of the city of Paphos, the one time capital of Cyprus.

Pygmalion Through to the Modern Day

The story of Pygmalion is only a minor one in Greco-Roman mythology, although a famous one, but it does link into other stories. In other myths, Daedalus was said to have been able to animate his creations, as was the god Hephaestus. Additionally, the bronze Talos was able to move, and even Pandora was crafted from inanimate clay.

The animation of the inanimate though, was not just a myth from antiquity, as there has been evidence discovered from across the ancient world, of craftsmen animating statues to encourage worshippers in many temples.

This though did not prevent W.S. Gilbert from writing a play, Pygmalion and Galatea, an Original Mythological Comedy, in 1871. This take on the original myth sees Galatea transformed into human form, but then also back into stone. This play is of course closer to the original story, than George Bernard Shaw’s work, but Shaw, in his own way, shows the transformation of a woman, in this case Eliza. 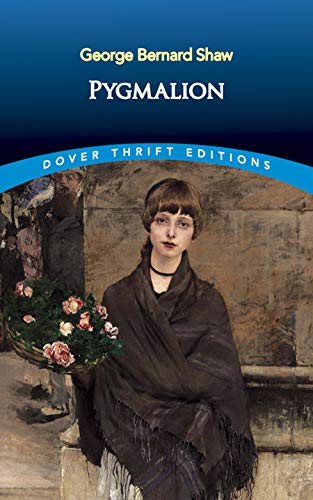