The Strange and Wondrous Blood Falls of Antarctica

From satellite photos, Antarctica appears to be a white, snow-covered and featureless continent. Covered by glaciers and racked by unimaginably cold weather, this continent can be easily described as inhospitable.

Yet, life exists in some of the most extreme parts of this frozen land. And some these life forms-- albeit small -- have spectacular ways to make themselves known. One example is found int the nearly featureless part of Taylor Valley where the ice seemingly "bleeds."

The Blood Falls of Antarctica is a shocking contrast to the vast snow-and-ice landscape that surrounds it. Its bright red flow can be detected by satellites and looks like blood flowing from a wound. But no harm has been done here. In fact, this crimson fall is an indication that something strange and miraculous is happening far below the ice pack. And this has been going on for millions of years.

This discovery is exciting, for it opens the door to the possibility that life can exists on places as remote and cold as planets and moons throughout the known universe. Also, it forces scientists to rethink the formula needed for life to thrive.

Its Discovery and Location

The Blood falls isn’t made of blood, of course. It is iron oxide-tainted saltwater that sporadically emerges from a fissure at the tongue of the Taylor Glacier and flows onto the surface of the ice-covered West Lake Bonney in Taylor Valley (which is part of the McMurdo Dry Valley system). It is believed that this iron-rich hyper-saline water comes from a sub-glacial salt lake of unknown size (and possibly formed five million years ago), which is covered by 400 meters of ice.

It was discovered in 1911 by the Australian geologist Griffith Taylor, for whom the valley (where the falls are found) is named after.

Earlier assessments suggested that the falls were red due to the presence of red algae. However, later test revealed that the coloration was caused by iron oxide.

...a recent analysis of the water revealed that it was teeming with microbial life, and has been doing so for the last 1.5 million years.

Why Does the Water Flow?

One mystery about the Blood Falls is that water is flowing in a region where it should instantaneously freeze. The answer to this is that the water's high salinity levels. It is reported to be much higher than the ocean and is concentrated in one area (a sub-glacial lake). Despite that the water has been measure more than -100 degrees, it cannot freeze, thanks to its salt content.

Impossible for Life (or is it?)

By all accounts, the water shouldn’t hold life. The environment upon which this briny liquid comes from is oxygen-poor and extremely cold. Also, the part of Antarctica it’s located, the McMurdo Dry Valleys, are devoid of animals and complex plants. On top of that, this region of Antarctica is considered by scientists to be a desert. Despite its extreme cold, it only receives 3.93 inches (10 cm) of snow each year.

Conditions below Taylor Glacier are even less accommodating for life. The area is devoid of light, making it difficult for the process of photosynthesis.

Despite these conditions, however, a recent analysis of the water revealed that it was teeming with microbial life, and has been doing so for the last 1.5 million years. How is this possible?

A Research team led by geo-microbiologist Jill Mikucki of Dartmouth College and funded by National Science Foundation, collected data from water samples that indicated that the microbes adapted by manipulating sulfur and iron compounds to survive (Staab, 2009). In other words, in place of photosynthesis, the microbes evolved in a way that they can convert Ferrous Iron and Sulfate ions to sustain life.

There are several hypotheses being proposed on how the microbe came to exist under the ice. One, the Snowball Earth Hypothesis, suggests that about five million years ago, the sub-glacial lake with the ancient microbes (along with the rest of the world) had been sealed off by ice that covered the entire planet at one point. In that time, the microbes evolved independently from other similar marine organisms.

The discovery of life in this fall indicates that life can exist in places and conditions that were once deemed undesirable or impossible. The microbes’ existence and abilities to survive and thrive as long as it has is still a mystery and investigation into it is still ongoing. However, it’s a mystery that may open doors to the understanding of how life can evolve in the most inhospitable of conditions, and without the normal components essential to creating life.

More Information on How the Blood Falls Became So Red 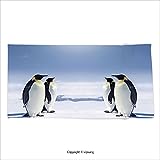