The Symbolism of Cats Throughout History

Out of all pets and animals in general, cats have been one of the most intriguing to me. I have had the privilege of growing up with cats, and from observing the grace, cunning, and amazing agility that they possess, they have sometimes appeared as almost supernatural to me.

Throughout history, cats have also been believed to be supernatural beings and have been thought of as gods to being the devil in disguise. The following is a list of what people felt was the cat's true identity.

The Ancient Egyptians had two cat goddesses, the first one being Mafdet, who had the head of a lion and represented justice. Eventually Bast replaced Mafdet, and over time her image softened to having the appearance of a domestic cat rather than a lion. Bast became the goddess of fertility, protection, and motherhood.

The Ancient Egyptians showed their respect to the cat not only while the animal was living, but even after its death. As they did with people, they mummified cats when they died. The Greek historian, Herodotus, wrote that after the death of a cat, the family would go into mourning as they would when a human relative died and would usually shave off their eyebrows to show their loss.

Cats were considered so sacred that if someone killed one, even if they did it accidentally, the individual would often be punished with the death penalty.

Particularly the Pagans who existed prior to the Christian age believed that cats were spiritual guardians that were sent to protect people from evil deities and energies. Others who felt similarly about cats were the Vikings as well as the Norse, who often traveled by ship and brought along cats to catch rodents and to bring fortune to those on board. Even Freyja, the Norse goddess of beauty, love, and fertility is depicted as riding a chariot that is drawn by cats.

Cats as the devil

During the medieval ages, cats were thought of in a much more negative light. They were thought to possess evil powers and were believed to really be agents of the devil or witches. People who kept cats were also believed to be witches, and if they were caught, both the individual and the animal would be put to death.

If a village or town came across a cat, the people would often beat or kill it, to the point where cats in Europe were almost at the point of extinction. The Black Plague, which was spread by fleas carried by infected rats, is believed to have occurred because there were no cats to hunt the rats. As a result, their numbers multiplied dramatically.

Once the practice of witch hunting disappeared, the cat population returned, and they once again became loved and popular household pets.

Throughout time, a variety of superstitions have been created that have been associated with cats, and therefore their presence had been thought to foretell both positive and negative events to come (see also, Feline Legends). Besides the well-known myth of black cats being bad luck, others have included that a sneezing cat will bring good luck to all who hear it and that a white cat that is seen at night is foretelling misfortune.

Read More About The History of Cats 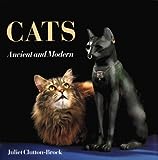