What Happened to the Missing Templar Fleet of La Rochelle?

The Power of the Knights Templar

When King Philip IV of France moved decisively against the previously untouchable and influential Knights Templar in the early fourteenth century. He had hoped to remove all traces of a holy order, that he believed to be full of heretics and the ungodly. Only the power of a mighty king could have hoped to achieve such an act. At the time, the Templars were one of the most powerful organizations within the known world. They were answerable only to the authority of the pope and did not have to pay taxes or pay attention to national boundaries. Most important of all, they did not bend to the will or the interests of the kingdoms in which they operated.

The Knights Templar were designated to be the protectors of the Christian pilgrims and they were the first organization that could properly rival the power of the royalty. The French King likely wanted to disband the order due to the large sums of money that he owed to the Knight Templar. This combined with the ill-feeling due to the orders recent loss of land in Jerusalem, signalled the beginning of the end for the Knights Templar.

Guardians of the Christian Faith.

Who were the Knights Templar?

The Knights Templar or to give them their full title. "The poor fellow-soldiers of Christ and the Temple of Solomon," were loyal warriors of an order of Christian Knights who offered safe passage, financial facilities and security in the Holy Land. They often skirmished with those who followed the faith of Islam, be they soldiers of the local nobility or bandits keen to rob the pilgrims of all that they possessed. The Knights Templar operated in the Holy Land from the start of the twelfth century until the loss of all the Christian lands there.

Only a small number of the Knights Templar were fighting soldiers, the rest of the order was essential to the logistical tasks needed in securing the safety of pilgrims in the Holy land.

The Order helped to protect the routes that the Christian worshippers used in their pilgrimage to the lands described in the Holy Bible. The Knights Templar were also used in the many crusades as shock troops against the non-Christian forces which desired control of the holy areas and important religious sites. The Holy land was vitally important to the Islamic, Christian and Jewish faiths. And the area has been fought over with great ferocity for countless generations.

The Demise of the Divine

The Knights Templar had considerable resources and a keen infrastructure, which was able to maintain the growth and dominance of the Catholic faith for centuries. But their lofty position put them at odds with the growing power of the royal houses who ruled throughout the continent of Europe. When the King of France moved to crush the Templar order, he did so only when Pope Clement V was at his absolute weakest. The king also made sure that the Knights Templar were in no position to offer any resilience to his actions. The king nullified his enemy with a detailed and strategic strike.

Out of the great chaos of the Templar's demise. Many riches and precious artefacts of antiquity were assumed to have gone missing. The disappearance of the vast Templar fleet at La Rochelle has made historians and conspiracy theorists speculate upon what had happened during this most chaotic of times.

The Riches of the Knights Templar

The possessions which the Knights Templar held in their care is open to much speculation and debate. As there were no surviving written records, speculation on their treasures has verged upon the improbable to the entirely possible.

After all, the Knights Templar held large tracks of land and they looked after the fortunes of the wealthy elite throughout Europe. The Knights Templar at one stage owned the entire country of Cyprus, which was at one stage an important centre for continental trade. La Rochelle was also a rich city built on commerce and trade. At the height of Templar power, it was a major port that they had a large stake in and used quite frequently for their holy missions.

The Knights Templar would have control of many warehouses and they owned docking bays were they would have received tax revenues and docking fees for the use of the facilities. The many merchants who operated in La Rochelle would have also paid an annual rent to the holy order. The Knights Templar with their selfless pledge to have no worldly possessions seemed to have amassed a large portfolio of riches which belonged solely to this powerful holy order.

Is This What Became of the Templar's Treasure?

Was There a Secret Templar Fleet?

The Myth and the Templar Legend

After the order was disbanded the Knights Templar became the subject of much speculation, fabrication and embellishment concerning their legend. The stories of discovering the Holy Grail and the Ark of the Covenant were a direct result of the Templar's secrecy and formidable power. From the testimonials of the Templar Knight's extracted under torture, there was never any mention of these prized Christian relics residing within the holy order.

From various writings across the same period, we know that at some stage in the Knights Templar history, they may have possessed what was believed to be part of the True Cross. The True Cross was part of the wooden structure used to slowly execute Jesus Christ. We know that the Muslim forces under the command of Saladin captured said relic and ransomed it back to the Knights Templar in the late twelfth century, but that could easily be a fabricated relic given that it would have been over a thousand years old.

The Knights Templar were a religious organization and some writings describe the Knights possessing other religious relics such as the clothes of holy men, the bones of many saints and other articles owned by martyrs to the cause of Christianity. Many of the holy relics that are still kept in the ancient Christian Churches of Europe may have been trusted to or loaned to them by the Knights Templar before their order spectacular fell from grace.

What do you believe?

Where did the treasure and fleet go?

What Resources did the Templar Have at Their Disposal?

According to various reports, the common belief was that the Templar fleet amounted to no more than half a dozen ships at best. We must also consider that the order was secretive and they could have bought many vessels and leased them out to private merchants anonymously. The official figures relating to the Templar fleet at La Rochelle at the time of the Templar's demise stated that they possessed only a few short distance cargo ships.

Given previously mentioned wealth that the order had at their disposal, the Knights Templar could have chartered several vessels to serve their needs. If the holy order wanted to transport the treasures of antiquity away from mainland Europe, they had the means and the organizational skills to do so. After all, the Order had many contacts and trading links across the known world. The Knights Templar had organized passage to the Holy Land on many occasions, so large scale voyages were not a logistical problem.

The Knight Templar's in Film

Where did the Templar Fleet go?

The generally held belief is that the Templar fleet of La Rochelle went to Scotland, but the fleet which travelled to Great Britain was not a massive Armada. Those who believe the remaining Knights Templar fled to Scotland speculate that only a few ships made it to the area as the ships used were not designed for long-distance transport and the surviving members limped away with very little wealth on board.

At the time La Rochelle was used mainly by the order for the import and export of wine. So perhaps, all the Knights Templar would have moved was a few decent barrels of table wine. Other theorists argue that those wine barrels could have held a variety of valuable objects. The abundance of Templar and Holy Grail lore in Scotland, point to a great treasure moving from mainland Europe to safety in the north of the British Isles.

The Chapel of Rosslyn has been mentioned in a few works of fiction, it is believed to contain the Holy Grail. The most recent and well-known account to mention this theory is Dan Brown's "The Da Vinci Code".

Could those who escaped the demise of the Knights Templar have settled in the area where the Chapel is located?

After a time, they may have moved these treasures on using their secretive network of agents and loyal merchants

Another interesting theory is that the fleet of La Rochelle headed off to Cyprus and hid the remaining relics in a safe harbour until new vessels could be secured. These new ships then set sail for the Holy Land and were buried away from the greed of the European royals. Of course, it is very difficult to prove such acts occurred, but we know that Cyprus was once owned by the Knights Templar and they may have had powerful friends on the Island who could help keep the fleet and their treasures safe.

A more likely outcome for the Templar fleet of La Rochelle is that it was sunk in the English Channel before it could head towards Scotland or Cyprus. The English Channel is a very treacherous stretch of water, with heavy currents and erratic weather conditions. If the fleet set sail in bad weather and was unprepared due to the chaos of the time. Several events could have sunk the unreliable vessels that the secretive order had in La Rochelle. The ships could have been attacked by pirates in the Mediterranean or the English Channel. In both of these treacherous waters, it was common for ships to fall prey to Pirates. It was a fertile hunting ground and remained that way until the rise of the great colonial powers in the sixteenth century.

Where is La Rochelle? 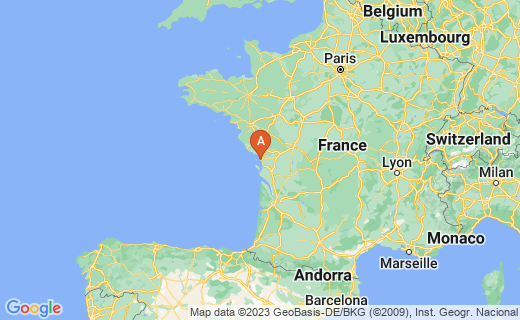 The secret treasure of the Knights Templar is a treasure that has no verified written account but continues to fascinate people to this very day. Hollywood continues to make movies with this treasure as a central theme, writers still use the Templar's secrecy as a major part of their plot and the mystery of ancient treasures keeps the attention of the everyday general public.

The thought of historical secrets waiting to be uncovered awakens the curiosity of many. What if the Ark of the Covenant was with the treasure? What information would the scrolls of Alexandra's library hold? Maybe they had the bones of a revered saint or the diary of an apostle. The contents of these missing ships could contain so much information or perhaps, they held absolutely nothing of interest.