Hidden Cause for the American Revolution: Desire for More Land

In 1750 a backwoodsmen of the American frontier carried his squirrel gun and dirk (a short Scottish dagger) in his saddlebag. Upon his head he wore a fur cap. He was dressed in greased leather pants and a homespun shirt and moccasins.The seaboard land was wearing out and he was looking for a new home where he could raise his family.

Soils in whole counties in Virginia had been such dry of minerals and had turned back to brush and pasture. German and Scots-Irish settlers like the frontiersman in the paragraph above had moved inland as far as the upper regions of the Susquehanna around Tioga Point. Areas where cornfields had once produced bumper crops now produced less than ten bushels to an acre. Wheat crops moved inland. In five generations millers followed the wheat crop from Boston to Hartford to New York and Wilmington Delaware. They dreamed of building water powered grist mills on mighty inland rivers.They looked to the land beyond the mountains to satisfy their desire for more and better land. 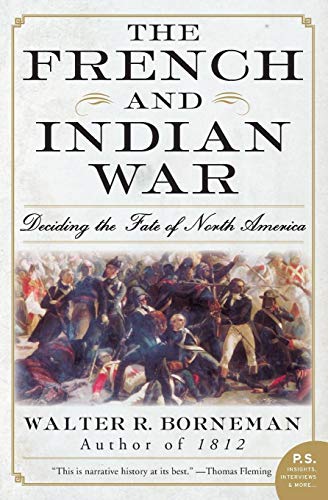 The French and Indian War: Deciding the Fate of North America
Buy Now

Getting Rid of French Competiition in the West

By 1750, two million native-born Americans lived in the English colonies. In addition, every day droves of Scots Irish who escaped the tyrannical, penny pinching landlords of the north Irish estates, Palatines and Flemish who survived the pillage of Louis XIV's armies, poured onto American shores. Everyone wanted their own land, and they went west pressing toward the mountains.

Influential families, speculators and land agents influenced colonial acquisition of land grants further and further inland. Virginia planters and London merchants formed the Ohio company and the king gave them a tentative grant of 500 thousand acres west of the mountains. Christopher Gist scouted the land. George Washington surveyed his Lord Fairfax's lands west of the Blue Ridge. Sir Peter Warren, the Renesselaers and their cousin Livingstons also obtained grants north and south of the Iroquois Valley. More and more people were escaping a crowded Europe in search of their own land and freedom in the New World.

For six generations along the seaboard, new cities, farms, and homes sprung up. The problem wasn't just new comers either. Settlers produced big families to work their farms. Pilgrims who had come on the Mayflower were estimated as having as many as 200 thousand descendants each.The land was getting crowded.The English settlers edged west while at the same time the French forts in the Ohio Valley that encircled the English settlements felt threatened. The war moved south through Western Pennsylvania, then moved north into New York. The Yankees as the Dutch first called them fought back the French and their Indian allies until 1763 when the French ran down their colors the Fleur-De-Lise from the fort masts. The English in turn raised the Union Jack rose over the St. Lawrence. The British now had control of all the land east of the Mississippi. The land was free of the French rule in the west and settlers were ready to head in mass over the Alleghenies to claim their fair share.

But it wasn't meant to be, not under British Monarchy rule anyway. The King and Parliament decided that they couldn't afford to maintain the outposts in the far west. The west belonged to the Indians and the British government refused to fight for the colonists in America. It was too expensive.

The backers of the Ohio Company went into secret session. The king's messengers went into session with the governors. when the governors came out of their council, they were scowling. Planters and farmers raged. The king issued the edict that there would be no settlements west of the Alleghenies. The king would not financially support forts with troops and without troops, the frontier would not be safe from Indian attack. The settlers would have to stay east of the mountains if they wanted to remain safe.

To add to the insult, the British government decided to tax the Americans for the war against the French. This only fueled the anger that they had concerning the fact that the Monarchy was limiting their movement. The lines were drawn by 1772, when the frontiersmen of South Carolina staged a private war against planter and merchant control in the Assembly, and the men of Vermont formed the Green Mountain Boys, Further south in political activists formed The Committees of Correspondence, and the Sons of Liberty. Virginia, the Carolinas, and Georgia had similar problems between the planters, lawyers, rich merchants in the low lands and the poorer cattlemen on the mountain slopes.The desire for land was the powder keg and the Battles of Lexington and Concord in 1775 were the fuse that blew up into revolution.

The Glorious Cause: The American Revolution, 1763-1789 (Oxford History of the United States)
Buy Now