The Two Seasons of the Salinas River in Paso Robles

Barb's hobbies are photography and studying nature. She gardens and takes photo walks to explore nature and capture it on camera.

The Salinas River as it Was Meant to Be

I Grew Up Before I Saw a Real River

When I was growing up, I always had a desire to see a real river – one with water in it. I grew up in the suburbs of Los Angeles and we were always crossing bridges over the Los Angeles River, but that was kind of a joke. I think I was in my early twenties and living in Long Beach before I ever saw water in that river, and that was after a series of rain storms. I remember how hard we laughed when I read that someone from out of state had asked for a permit to kayak down the Los Angeles River in summer.

I continued to live in the Los Angeles area until I was about 35. We moved to Ventura County where, of course, we still had the ocean nearby, but no flowing rivers that I was aware of.

I saw my first real rivers in the 1980’s when we took family vacations to Oregon and Washington. The Rogue River became a familiar rest stop. The Renton library we often visited while living temporarily in Auburn, Washington, was right beside the Cedar River. Of course to even get to Washington, we had to parallel the Willamette River and cross it many times until we finally got to see and cross the broad Columbia River in Portland.

Later, when we vacationed in the Northeast, we saw several Rivers, and had crossed Old Man River himself on the way. I had always longed to see the Mississppi, since I’d read so much about it.

In Massachusetts there seemed to be rivers everywhere. For one who grew up in Los Angeles County it was exciting to see so many rivers. Two special ones there were the Charles River. near Boston, and the Concord River in Minute Man National Park, Concord, near the famous  North Bridge.

On the way home we saw the Platte River, which we had also read about in our study of the Oregon Trail. Still, though, I’d never lived near a river I could see on a daily basis and observe through its seasonal changes.

Is There an Important River in Your Life?

At any time in your life, have you lived near a river that you loved? 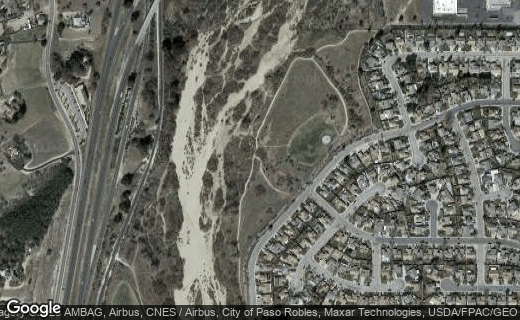 The Seasons of the Salinas River

Now I do live near a river – the disappearing Salinas River. It runs through Paso Robles where I own a house. Near the house is Lawrence Moore Park, and the Salinas River runs through the park. The Salinas River Trail also runs through that park, and follows the river. I have hiked it many times in all seasons. In the map above, you can see my house on the corner of Creeksand Lane and Riverbank. This map picture was obviously taken during the dry season.

The Salinas River in Paso Robles basically has two seasons – the wet season and the dry season. North San Luis Obispo County, where I live, is almost always in a drought. Cities restrict water usage almost all year, except for some years in winter. But if we are fortunate enough to get a lot of rain, the normally dry riverbed fills and the Salinas River flows.

When it flows, we have a real river – a river swift enough and deep enough to kill, as it did again this winter when a homeless man climbed onto a sandbar to sleep and was drowned when the river rose. If this were in Australia, the Salinas River here would probably be called a billabong -- since it's filled with water only during the rainy season.

The video below was taken in April, 2010. I saw a calm place at the edge of the river with a lot of algae, and I knew I should find tadpoles there. At the beginning of the video you get some nice views of the entire width of the river and you see its current. Then I zero in on the tadpoles. It would be a very peaceful scene if that motor-scooter  weren't riding back and forth along Riverbank.

You Can Find Tadpoles in the Salinas River in Spring

The Salinas is a Braided River

From the Salinas River Trail, you see a river divided in most places by sand bars like little islands, with shrubs and grasses growing on them. That means you can't always see the water that is closest to the opposite bank, and that's where the water lasts the longest.

In the picture below, you can see that most of the sand bars are covered. The river flows all the way to the bank. Below that, you will see that the river this year even came over the bank in some places and into the access paths.

A reliable source told me that long before I lived here, the Salinas River actually flooded not only the park area, but also actually flooded some of the houses in the Riverbank tract next to the river. So far, I've never seen even the park flooded.

Are you a flood survivor?

Have you ever lived close enough to an overflowing river to have flood damage to your home?

The Salinas River Begins to Disappear

The Dogs Love the Dry Riverbed

Now Let's Look at the Salinas River During the Dry Season

As the rain stops falling, bit by bit the river begins to dry up -- at least you stop seeing it in the riverbed. I think there is still a bit of it here in this top picture if you look toward the center between the vegetation. You can see the sand is still dark. Probably if you were to completely cross the dry places, there would be a bit of stream left near the far bank.

When the riverbed is dry, it's not empty. That's when people walk into it to explore. The side closest to the park and trail dry first, so people will walk across to see if there is still water on the far side. Often they will bring their dogs and let them run free. Perhaps that's one reason many people want to see Lawrence Moore Park become an official dog park for the City of Paso Robles.

The Dry Season of the Salinas River

The dry season starts sometime between late May and July. By then you are lucky to find even a trickle in this part of Larry Moore Park. You may find more water in the northern most parts of the Salinas River Trail under and on the other side of the Niblick Bridge. If you contrast this top picture with the picture of the river coming up into the access path, you will realize how dry the river is in the summer and fall. You can see that my river has left its bed and disappeared from view.

Below is a view of the river from the east part of the riverbed looking west. Just north of here in the dry season, you can see jackrabbits racing across the riverbed at dusk. They are so fast I've never been able to capture one with my camera.

I'm always sad when the Salinas River disappears each year. But if I could take the river being full for granted all year, I wouldn't have the joy of seeing it reappear again each spring after the rains. Each season has its own kind of beauty, and I've learned to appreciate both.

More River News Since I Wrote This Hub

Within two weeks of my taking these pictures on March 21, 2011, the river began to disappear again. I can't believe how much water it lost in just two weeks. I went for a long walk on the thirteenth day and took over 200 more pictures. I also discovered something very interesting under the bridge. I wrote it up with some of the recent pictures in a blog post: The Salinas River Is Starting to Disappear Again. It's short and sweet if you're interested.