The Influence of the Vikings in the East Riding of Yorkshire.

York or Jorvik as the Vikings named it, was possibly the most strategically vital settlement of the Dark Age Viking kingdoms within England. To colonise and control the area it was vital that there was good access to the North Sea. This would help to re-build the City of Jorvik into a rich and vibrant trading centre. A great deal of the Danelaw area was heavily influenced by the Vikings, much of this is still evident today in the place names throughout the area of Danish settlement. The Danelaw region of England was the area that the Vikings effectively annexed or were given under treaty by either the leaders of the Germanic tribes or the native Britons. Both the Germanic tribes and the Ancient Britons had competed for the kingdoms of England and Wales since the Romans had departed their lands in the fifth century AD.

The Danelaw area consisted of Leicester, Nottingham, Lincoln, Derby and Stamford. All of these places were accessible by the rivers of England, which were easily navigated by the very manoeuvrable Viking long boats. The Viking's presence and influence in these fortified settlements were dependent on the Viking control of the rivers and the sea. To keep control of this territory the Vikings had to have safe passage through the mouth of the River Humber. The River Humber allowed access to the River Ouse, River Trent and River Foss. This made keeping control of the River Humber essential for future prosperity.

From Raiders to Rulers

Settlement Along the River Humber

The Lincolnshire coast line has a good degree of Scandinavian settlement and habitation. We know this due to the names that are still in use today. Lincolnshire has Grimsby ( Grim's Village ) and Cleethorpes ( Clee's Farm ) on the strategic coastal points of the river's path. If we look further inland, it shows that the Danish invasion of the area took on a lot of the original Anglo-Saxon settlements and merged with them.

The northern bank of the Humber does not show the same evidence of Viking colonization and influence. Kingston upon Hull is the biggest port along the north bank but shows no obvious Viking identity or heritage. But Kingston upon Hull only came to prominence after the Vikings had lost their foothold in Yorkshire. The evidence at this moment in time indicates that the Vikings had no interest in the north bank of the River Humber.

The principal modern population centres on the East Yorkshire coasts are derived from Anglo-Saxon settlements such as Beverley and Hedon.

Why is this so?

We know that the Vikings took over this area as it was part of the kingdom of Northumbria which stretched from the River Humber up to the modern border with Scotland. 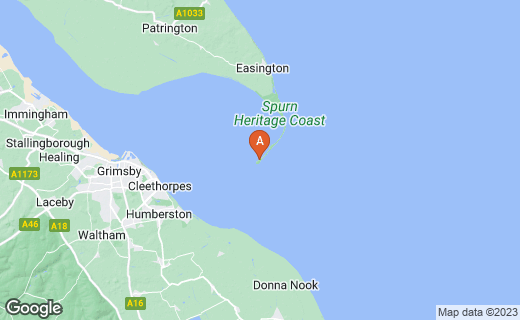 What remains of the former thriving port of Ravenspurn.

The reason why evidence of Viking settlement is so hard to find is due to two main geographical reasons. Firstly the entire Northern bank of the Humber at the time of the Danish colonization was low lying marshland, so there was no real settlement in the interior of the East Riding of Yorkshire.It was not until the Holderness area was drained by a system of dykes similar to the drainage in the South Lincolnshire Fens, and more recently the installation of modern pumping stations that the interior became more than woodland and lakes.

Secondly the areas that the Vikings did colonize at the strategically important areas of the River Humbers mouth have been lost due to coastal erosion over the last 700 years. Since the Roman times East Yorkshire has lost over 20 villages to abandonment and coastal erosion, the most prominent was Ravenspurn and Ravenser Odd.

Ravenspurn and Ravenser Odd were both prominent towns in the far east of the county of Yorkshire. Both these settlements are now covered by the tidal waters of the River Humber and the treacherous North Sea. The Raven prefix of these settlements likely comes from the shape of the headland that encroached into the sea. The Viking name for Ravenser was "Hrafn's Eyr" this roughly translated as "Ravens tongue". The only geographical evidence of these settlements is the site of the local lifeboat station Spurn point, this is also likely to succumb to the coastal erosion that claimed the two Viking settlements. The demise of Ravenser Odd allowed the port of Hull to become the regions premier industrial port.

Other lost ports and settlements in the East riding of Yorkshire include the towns of Sisterkirche ( which translates as sister church), Tharlesthorp ( Tharles farm ) and Frismersk ( this settlement is more of a Frisian settlement but could have included settlers from the intermarried Dutch Vikings).

All of these settlements disappeared into the North Sea from the twelfth century on-wards. There are some small hamlets in the East Riding which point to a Viking heritage, but not on the scale that Lincolnshire can support. The current Hamlets of Ellerby( Ella's village), Grimston ( Grim's town ) and Skeffling illustrate that some Viking heritage has survived in spite of the North Sea's relentless onslaught on the Yorkshire coast. The loss and records of so many Viking settlements has robbed us of further knowledge of the Viking age of England and ultimately we have lost a piece of the ancient history of the British peoples.