The Violent Algerian War of Independence

Violence against innocent civilians is not justified in any context. However, violence is a tool frequently used to achieve many objectives. The French entered Algeria in the 1840’s using troops and rifles. The French police oppressed the native population for one hundred and thirty years. However, the times had changed in the 1960s. Algerians Arabs tired of living in misery and squalor realized the French were not going to leave Algeria as they left other colonies because of its status as a department in France. They also realized that for them to become economically prosperous and politically free, they had to kick the French out of Algeria using any means. Gillo Pontecorvos’s film, The Battle of Algiers, adequately captures the gradual escalation of violence and its frequent use by the FLN during the course of the Algerian War of Independence. The film successfully justifies the violent tactics used by the FLN against the French settlers by showing the benefits of violence and its necessity in Algeria’s case as described by Frantz Fanon in his book The Wretched of The Earth.

The film successfully justified violence firstly by showing it as a natural reaction to centuries of French imperialism. Pontecorvo’s film shows the numerous truths the Algerians came to understand and realize after 130 years of colonization. The first truth the Algerians realized was even though the ideals of liberty, equality and fraternity were universal, as long as they were implemented by the French, they would be exclusively for the French. They realized there was no use of hoping in the French to give them political liberty and economic prosperity; rather freedom would be achieved when they kicked the oppressors out. The second truth the Algerians realized was the goal of the French civilizing mission was to make the Algerians adopt French culture and not make them prosper in their culture. The third truth the Algerians and the FLN leadership realized was independence would not simply be handed to them. Algeria was a department in France because of its huge settler population and the French were not going to leave Algeria unlike their other colonies. Also, the ruthless French settlers who lavished in comfort were not going to surrender their comfortable lifestyles so that the Arabs can become prosperous. There was a large discrepancy in Algeria because although Algeria was a department in France, majority of its population languished in poverty unlike any white Frenchman. The French used violence to colonize Algeria and they were prepared to use it to keep their new department across the Mediterranean. Nonviolence as practiced by Gandhi was not applicable here because Algeria was an integral part of France unlike Morocco or The Congo. The film shows violence was the only tool to kick the French out of Algeria because it afforded certain benefits that other methods did not.

In the Algerian War of Independence, violence was beneficial firstly because it unified the people. Fanon notes violence united the Algerian people in three ways. It firstly emboldened a person’s character by committing acts of terror. Ali La Pointe’s little assistant, Petit Omar is an example. Omar’s association with Ali’s violent behavior emboldened him to steal the microphone behind the French police and encourage the Algerian prisoners. He assisted Ali and the three women in placing the bombs and died with them. Despite his youth, he became emotionally and mentally strong enough to help Ali and his compatriots for a national cause. Violence united the Algerian people secondly by uniting warring factions and building a strong leadership. The FLN’s resolution to use violent tactics made them indiscriminate. Ali La Pointe and E-Jafar carefully organized a cellular structure under an executive leadership to bomb cafes. They included men from various occupations, women and children. Violence unified the people thirdly by establishing a national consciousness. Towards the end of the film the whole Arab quarter of Algeria was politically radicalized and they responded with protests and riots. Violence was advantageous secondly because it could cleanse the people, and it did in two ways. Violence firstly cleansed people by removing the racial, economic and political inferiority complex from the colonial people. Ali La Point himself was an example. He was a thief, illiterate and uneducated. However, his violent behavior removed his inferiority complex because people became afraid of him. He rose to the top ranks of the FLN leadership without anything except his will to use violent means to kick the French out of Algeria. Violence cleansed the people secondly by giving them the self confidence they needed to mobilize themselves for independence. The three women who worked in the brothels are a prime example of this. The power to harm the French greatly boosted the confidence of these three women and made them very usable for independence. Violence was especially liked by the FLN because they possessed the power to harm and create fear.

According to Fanon’s analysis, violence was beneficial thirdly because it prevented the colonial masses from being pacified easily by demagogues. At no point in the film did Ali La Pointe and El-Jafar give inspirational speeches. Towards the end of Pontecorvo’s film, the Arab Quarter eagerly participated in the week long protest because the FLN’s violent tactics were inspirational acts. The whole Arab population mobilized themselves with violent riots and protests because they realized violence was a tool that empowered them to harm the French and make them leave. Violence radicalized the colonial people to a great extent and they were not going to stand down unless France left Algeria. The people were knowledgeable of the situation because they were participants in it. They would not be led astray by leaders with selfish motives who approached them with stale bread and a few milligrams of medicine. Violence was beneficial fourthly because it made the situation very difficult for France to keep Algeria. The situation was becoming an impossible one for the French .During the course of the Algerian war, thousands of French soldiers dies and hundreds of thousands of Algerians died. France could not afford to divert huge investments she required herself to keep Algeria. International pressure was mounting in France to give up her colonies because of the violent reactions of the Algerians. The situation in the 1960s was no longer conducive for colonization especially because the colonial people could not be suppressed or pacified in any way. The Algerian war of independence was to say the least, a very prickly affair. Violent tactics used by the National Liberation Front against the French settlers and torture used by the French Army as a response are very controversial topics in Algerian history. However, despite the justifications of violence, it was certainly a necessary ingredient for Algerian independence. 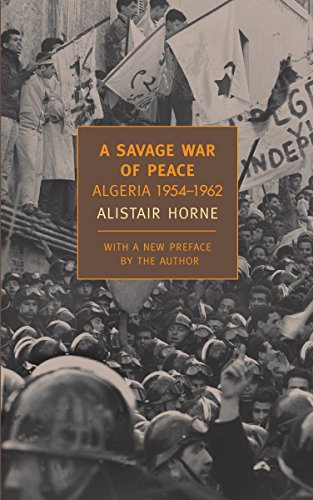