The Witch of Treva - A Cornish Legend

Cornwall lies on the south west tip of the British Isles, and is considered by many to be one of the Celtic nations. With its own language and distinct culture, the Kingdom, or Duchy of Cornwall, has it's own strong identity that is embellished by its wealth of folklore.

Witches and pellers are not uncommon in this region, with stories a-plenty of their exploits and powers. This tale comes from a hamlet near Zennor, which is a small village on the north west tip of Cornwall, and is adapted from "Popular Romances of the West of England; or, The Drolls, Traditions, and Superstitions of Old Cornwall" by Robert Hunt (1908) [1]. I've been told that Treva is now known as Trewey, where Zennor's Wayside Museum is to be found.

The Witch of Treva

Many years ago, there lived in Treva, a woman who was skilled in charms, spells, and witchcraft. He reputation was well known, and by the time she was an old lady, she was said to be deeply skilled in dark incantations and necromancy.

The locals all held her in respect, awe, and fear, but her old husband would have none of it and considered it all gossip. If a woman was old and ill-mannered enough, rumours would soon fix fast on assumptions that she was a witch. She bullied everyone else with threats of curses, but she would not bully him. After all, a husband was a wife's master, so why should he be cowed by her supposed powers?

It seems the old man and his wife had a rather tempestuous relationship, as there would be many arguments. One such disagreement occurred when the husband came home to dinner one evening, and found that there was nothing to eat. His belly growling, he found that there was not a scrap to be found, and bellowed in anger at his wife about there being no meat in the house. As he raged, his wife replied, "I couldn't get meat out of the stones, could I?". Her tone only enraged him further, but she explained that there simply was no food and it was in vain to give the reins to passion.

She told him that "hard words buttered no parsnips." and this seemed to be the final straw. The husband sat down quietly and sat silently for many moments. He decided that he would at last put his wife's reputed powers to the test. Quietly he replied, "Wife, I will be the death of you if you do not fetch me some dinner. But should you within half an hour bring me some good cooked meat, I shall believe all of your boastings and be submissive to you until the end of my days."

Well, the old wife had nothing to lose. Her husband's anger had gone from hot as brimstone to cold as steel. He didn't pay her the right respects as the locals did, but she'd change that soon enough. She decided to show him what for.

The nearest market town, St. Ives, was five miles away, and it seemed impossible to get there and back before the thirty minutes were up. Throwing her cloak about her shoulders, she told her husband how she would be back before half an hour was done. She donned her bonnet, threw him a knowing smile, and set off.

Watching his wife walking down the lane at a leisurely pace, the husband clenched his fists. Everything she did seemed to be done to taunt him or make a mockery of him, even the way she dawdled along the road. At this pace she might be back for Whitsun, never mind supper time.

But then, my dearies, a strange thing happened. As he saw his wife reach the bottom of a hill, the husband watched as she knelt down and crouched. She seemed to disappear, but from out of the heap of clothing ran a hare, dashing at full speed towards St. Ives. Away the hare raced until it was out of sight.

Half an hour later, in walked his old wife as pleased as punch with a basket filled to the brim with "good flesh and taties all ready for aiting." He could doubt it no longer. His wife was a witch all right, and as he tucked into his dinner, she reminded him of his promise. He served her every demand and whim, living in fear of her until death parted them.

The husband got the last laugh in the end though. He outlived his wife.

As can be expected, the witch's demise was not a peaceful affair. It seemed that one of her necromantic spells went wrong, as the husband came home one afternoon to a terrible scene. The old woman was shrieking as she twisted about on the floor, the room a swirling with evil spirits. The old husband took one step into the cottage and then came straight back out, closing the door behind him, with terror painted across his face.

It was only when the terrible noises stopped that he dared return to his cottage. A black cloud had appeared over the roof of the house, whilst the rest of the sky was clear and blue. Bravely stepping inside, he could see that the room was in a terrible state. Plates were smashed on the floor, and their furniture was scattered all about. He could see his old wife lying still, and slowly he approached her, calling her name. Her eyes stared at the horrors only she had seen, and her skin was cold to the touch. No more mischief would she be causing her neighbours.

She was laid ready for burial, wrapped tightly in a shroud which was carried by six men towards the church. Half-way from the cottage a hare dashed out from the hedgerow and jumped onto the body. The men dropped the her in fright and ran for their lives, believing that the old witch had come for them.

Six men took their place and continued the journey towards the church. The hare returned and again leaped up onto the deceased old woman. Again, she was dropped in fright. Leaving it lying in the road, the villagers were happy enough to leave the old witch in a ditch and get home safely, but the parson convinced them to muster their courage. Walking at a fast pace, with the Lord's Prayer chanted by the parson, they hurried as fast as they could to the churchyard to bury the old woman and be done with it.

As the corpse was placed on the side of the open grave, the burial service began. The hare sat staring at those gathered, and as the parson uttered, "I am the resurrection and the life," the animal howled diabolically. All trembled in fright and astonishment as the hare, changed into a unshapen creature, black as sin and twice as foul. Before the parson could commit her soul to heaven, the creature vanished before their eyes.

Finally Treva was freed of the woman that terrified them with her powers. But to this day, you'd be hard pressed to find a man who complains that his supper isn't on the table when he gets home from work. 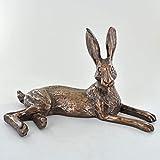 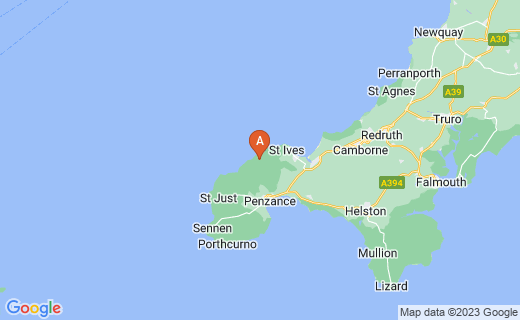 [1] Robert Hunt, Popular Romances of the West of England; or, The Drolls, Traditions, and Superstitions of Old Cornwall