The Youngest Child in the Family, Part 1

THE BABY, JEWEL, and PRECIOUS ONE in the Family

STRIVING TO BE TAKEN SERIOUSLY

Look At The Little Baby-Aaaaah! Soooo Cute And Utterly Adorable!

What is there to say? The youngest child is the last child in the family constellation! There is definitely NOT going to be anymore children! When you were born, that was it! No more deliveries! You are definitely not going to be dethroned-not ever!

The youngest child often gets away with things that her/his oldest sibling or siblings would be chastised and punished for. She/he is often allowed outlandish liberties regarding behaviors. She/he is not expected to set an example and to be mature like the oldest child in the family. She/he is granted the right to be a child longer in life.

Because of the ordinal position of the youngest child in the family, she/he is viewed as "the child" of the family. She/he has less strictures regarding behavior. She/he is not expected to always be on her/his guard as her/his older siblings are.

The youngest child in the family as often perceived to be innocent, naïve, and not knowing any better. She/he knowing this, often can use this as leverage, into manipulating her/his older siblings to do her/his bidding. She/he is often adapt in the use of emotional and psychological blackmail of her/his older siblings in that regard. She/he can instigate a familial crisis and/or situation and, of course, the older siblings are naturally blamed for it! A famous Hollywood actor/producer/mogul, who is the youngest of nine children, related during an interview that he always used manipulative behavior as a child and young adolescent to obtain what he wanted.

Because everything is done for the youngest child in the family, she/he is often extremely irresponsible and immature at advanced ages in comparison to her/his older siblings. She/he often has a lackadaisical attitude towards life- thinking everything is a game! Many youngest children often do not develop the necessary independence, thus transferring their dependency on parents and older siblings to teachers, bosses, and significant others.

Some youngest children often are passive, preferring to wait upon others to instruct them rather than to be independent self-starters. Quite a few of them want others to rescue, salvage, and save them from life's difficulties instead of owning up to their mistakes. Many of them have the mistaken notion that nothing is EVER their fault, it is always someone else's fault. Their motto is to please help me, I am just an innocent.

Since older siblings tried and went on various paths of discovery, the youngest child either does not try because it was done before or go into a vastly and utterly different path than her/his siblings. Many youngest children are often quite innovative and unconventional rule breakers. They love to experiment and see nothing wrong with going off the beaten path so to speak!

That said and done, youngest children in the family tend to be the rebels and antiauthoritarians of the family. This is because as children, they are not held to higher and stricter standards as the oldest sibling was. Furthermore, they were given more leeway to explore all facets of their childhood. This translates into youngest children have more avenues to express themselves, knowing that there is not one standard and/or way to behave! In families, youngest children often have the freedom that their older/oldest siblings do not have! They often observe their older siblings in terms of lifestyle, academic, and familial choice. Oftentimes, they elect not to follow their older siblings or the family dictum, wanting to be their own individual persons!

Part of that rebellion on the part of the youngest child is her/his wish to be respected and taken seriously. Youngest children are often perceived as cute and babyish well into late adolescence and early adulthood. They have to work thrice as hard as other ordinal birth positions to be considered valued and worthwhile contributors.

Oftentimes, the youngest child is not thought of in more assertive and positive terms but in often condescending terms. Many youngest children reported that even as adults, they are viewed as less intelligent, ambitious, serious, and responsible than their older siblings. They opinions and thoughts are often derided and discounted by family members and relatives. They feel that they must work 24/7 to revamp their image to a responsible and mature person to be taken seriously!

Of all the birth orders, the youngest child is the most spontaneous, youthful, and playful. They usually take life for its own worth. They are not taskmasters. They believe in having fun and enjoying life to the max! They contend that there are no one set rule for everything and that rules are made to be analyzed and broken! They are also not afraid to make mistakes and to appear to be less than perfect! 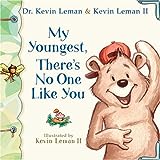 My Youngest, There's No One Like You (Birth Order Books)
Buy Now

Being the Youngest Child in the Family, Part A

How was your experience of being the youngest child in your family?

Being the Youngest Child in the Family, Part B

What is your respective family size?