We all know that the largest and tallest volcano in the world is the Ojos del Salado (6,891 metres (22,608 ft) tall), which is a stratovolcano (is a tall, conical volcano with many layers of hardened lava, tephra, and volcanic ash) in the Andes on the Argentina-Chile border. But the largest and tallest volcano in the entire solar system is the Olympus Mons (extinct volcano) on the planet Mars!!! Olympus Mons is 24 kilometers (78,000 ft.) above the surrounding plain and assumed to be in a 2 to 3 kilometers depression, which gives a total height of 26 to 27 kilometers. Its base is more than 550 km in diameter and is rimmed by a cliff 6 kilometers (20,000 ft) high. It has a caldera of 85 km (53 miles) long, 60 km (37 miles) wide, and up to 3 km (1.8 miles) deep with six overlapping pit craters created by different volcanic events. These measurements are just estimations that were calculated from the examination of pictures of the spacecraft Mariner 9 in 1971. Olympus Mons is a Latin name, meaning Mount Olympus. It is three times as tall as the Mount Everest. It is approximately the size of the American state Arizona. It is a shield volcano, very similar to the ones in Hawaii, formed by layers of lava over years.

Comparison of Olympus Mons with Mount Everest and Mauna Kea Till the late 19th century, this mountain was considered to be an alb Edo feature NixOlympica ("Snows of Olympus"). This volcanic mountain is very wide making its slope very shallow. So a person standing on the surface of Mars will not be able to see the complete volcanic mountain. Parts of the mountain can be viewed from its highest summit, but still its base will disappear into the horizon, since the size of Mars is very small compared to earth. The best place to view would be from space. The Olympus Mons was formed the same way as the Hawaii, by an eruption of magma from a hot spot below the surface. Since the layers of lava have formed one on top of the other from one hot spot for a long time, it is believed that there are no tectonic plates on Mars to dislocate the mountain thereby letting it grow bigger and bigger with years. Olympus Mons is situated in the Tharsis Montes region of Mars (Tharsis Montes is a huge swelling on Martian surface with a range of three volcanoes in the Tharsis region of Mars. It is a plateau and the largest volcanic region on Mars). Two of the craters on Olympus Mons have been named by the IAU as Karzok crater with 15.6 km diameter and Pangboche crater with 10.4 km diameter. These volcanoes are tall enough to reach a height above the dust storms that frequently appear on Mars. The Olympus Mons volcano is surrounded by a region called the Olympus Mons aureole (circle of light). This area has gigantic ridges and blocks that extend up until 1000 km (600 miles) from the summit. This shows the evidence of the development and resurfacing that was connected with glacial activity. But this aureole is many a time misunderstood with the escarpment. Some theories explain that this escarpment was formed by landslides, and the aureole consists of material that got deposited from these land slides.

Studies indicate that Olympus Mons first erupted between on and two billion years before. But the time when the volcano was last active still remains a question. Some lava on the slopes of this volcano still appears quite fresh. Astronomers and other scientists believe that it might have been recently active up until one million years before. 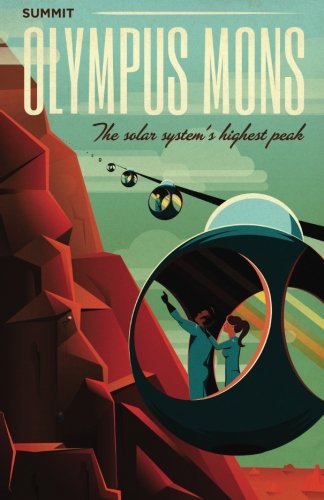