In an intriguing series of anthropology and history classes about Indigenous Peoples of North America, my fellows and I heard much about the Haida and Haisla peoples of the Pacific Northwest, but little about the other related groupings in British Columbia.

We did not know, in fact, that these groups branched out and extended southward to Alaska, Washington, Oregon, California, and even Mexico. Intermarriages with other groups brought additional richness to their artistic traditions. Various migrations and links among peoples had been discovered and recorded by linguists as early as 1921, but decades would pass before we learned of all this in Midwest America.Today, Native North American DNA has been linked around the subpolar regions of the north.

The Kwakiutl were found to be as important culturally as the Haida and Haisla peoples, when Franz Boas, the Father of Anthropology did his related work in the late 1800s through the early 1900s. This included close work with master cedar carvers and weavers like Mungo Martin and his wife.

The Haida language is felt by some authorities to be the only language of its kind, unrelated to any other tongue.

Some researchers agreed with Boas and continued to trace lineage through the female side of the family, however. Matalineal First Nations continue to have female leaders today.

Some US anthropology projects handled the controversy by essentially ignoring the matrilineal societies of North America. Others felt that the Pacific Northwest Indigenous Peoples were becoming too complex to handle in the small number of courses provided and focused on the Haida or Haisla.

However, Haida language is stated by some authorities to be the only language of its kind and the Haida form a group by itself, without any related languages. Traditional arts do seem similar to that of other populations in the Pacific Northwest.

The Northern and Southern Kwakiutl, for example, have been researched beyond Franz Boas in recent years and their fine arts have been displayed in the Royal British Museum in Victoria, BC, Canada. Viewing these artifacts and contemporary pieces of today in surrounding art galleries brought me to a new understanding of their culture in addition to that afforded by my anthropology courses.

The Kwakiutl are further divided into smaller communities and each maintains its own,separate foundation stories describing their peoples' origins. Their traditional arts show some similarities to that of the Tsimshian. The Kwakiutl gave us great artists like Chief Charlie James, Mungo Martin, Ellen Neel, and their descendants that are still producing carved cedar poles and masks today. The Tsimshian have produced their own renowned artists and also produced descendants active in the arts today, evidenced by video presentations below.

A tendency to lump together the Coastal Peoples into one or two groups instead of of the dozens that endure has been incorrect, but that tendency has been corrected in large part, because of additional research excavations and media focus. 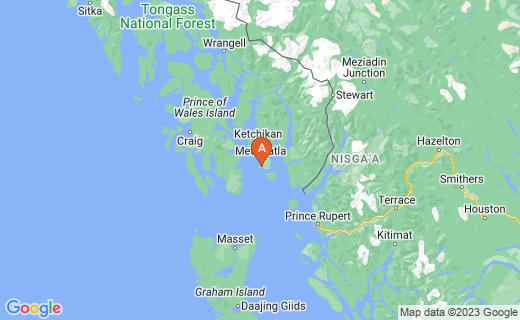 The Tsimshian People of Alaska

The Tsimshian of Alaska migrated from British Columbia, where they lived in Port Simpson, Metlakatla, and Ckain. During the middle 1800s, William Duncan was a missionary sent by the Church of England to the Tsimshian people.

Duncan taught the Tsimshian lessons from the Bible. Some sources state that he also taught them how to weave, how to make clothing, and how to conduct various other trades. This is rather difficult to believe, given the long history of arts and trades among the Tsimshian people in BC and Alaska, including long house art and architecture, button blankets, carved poles, fishing, and canoe production.

Regardless, Duncan also successfully negotiated with US President Grover Cleveland to obtain the 86,000-acre Annette Island for the Tsimshian. Today, the island is the only Native Alaskan reservation in Southeast Alaska. it has only one town, Metlakatla.

The North Pacific Expedition (1897 - 1902) under Morris K. Jesup established its manager, Franz Boas, as America's leading and pioneer anthropologist. The Jesup Expedition is commemorated in the Crossroads of Continents exhibition at the Smithsonian and the native peoples studied during the expedition are showcased in the Museum of the Native American at the Smithsonian Institution in Washington DC.

The expedition, undertaken by Russians and Americans, is considered to be the most important expedition in the history of anthropology. It studied the relationship between peoples of the Pacific Northwest and peoples of of Far East, namely the easternmost areas of Northern Russia in Siberia. The expedition provided the foundations for migration, linguistic, and DNA studies today that link Indigenous Peoples around the circumpolar regions of the Earth, including evidence in 2011-2012 found in Iceland.

The study examined the lives of the Haida, Kwakiutl, Bella Coola, Chilcotin, Shuswap, Quinault, and Lillooet and Thompson area peoples; the Inuit, Aleut, Chuckchi, and others. This includes people along the Amur River in Siberia, where totem poles were found and the Reindeer Chuckchi.

George Hunt, a famous Tlingit, was active on the expedition and transcribed Kwakiutl texts for Franz Boas. Hunt was so successful in collecting artifacts, that Chicago's Field Museum attempted to recruit him for their own work in examining the Pacific Northwest. George Hunt's descendants are traditional artists today.

Mr. David Boxley is a Port Gamble Tsimshian artist. In the video below, he tells of his 22-foot Tsimshian that is now on display at the Smithsonian Museum of the American Indian in Washington, DC. These carved poles often require one year or longer to complete. 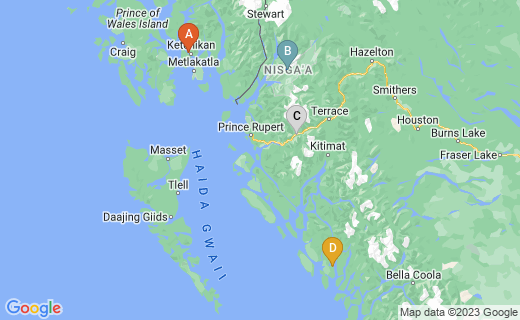 B
Nisga'a - Town named after the Tsimshian Group in the area:
Nisga'a, BC, Canada

From Alaska to Mexico

Sources vary, but the most detailed descriptions bring to light four different groups within the Tsimshian Peoples, based on linguistic differences.

Since 1999, linguists have determined that some Northern Kwakiutl Groups speak Tsimshian language and dialects. In fact, these languages have been found to extend from Alaska, down through British Columbia, down the American West Coast in California, all the way to Mexico [Sapir, Edward. Language: An introduction to the study of speech. New York: Harcourt, Brace and Company; 1921.]

The Tsimshian groups in Alaska and BC as of 2012 include, north to south:

From studying maps published from 1999 - 2011, I find that the Tsimshian inhabit an ellipsoid land area extending from the Pacific Northwest coast, inward into BC and between the Northern Kwakiutl Groups and the Southern Kwakiutl Groups. The land area covered is much longer than that described in the 1999 book by Edward Malin (see book to the left), but he discovered some linguistic fine arts facts about the Tsimshian People before other researchers did so, as discussed further below.

The Penutian language family includes several branches native to California. This encompasses the Sahaptin, Chinook, and Tsimshian languages of the Pacific Northwest coastal areas and languages in Mexico and parts of Central America as well (Edward Sapir, 1929). Linguistically, languages relates to the Tsimshian appear up and down the Norther American West Coast. Considering that the Spanish claimed parts of the Pacific Northwest as part of New Spain at one time lends credence to this notion -- Islands between Washington State and Vancouver Island have Spanish names: San Juan Islands, etc. The Spanish in the area may have brought parts of the culture back home to California, Southern California, and Mexico.

Exterior art included the traditional carved cedar poles standing outside of most long houses that tell the stories of the family and clan within the house. In nearly 60 years of research, Malin found similarities and differences among the art pieces of the separate Pacific Coastal groups.