Chuck is a former Vietnam-era air navigator with degrees in History and Economics. Areas of interest include aviation and military history.

A Case of Spy vs Spy

In a recent Hub in his excellent series about World War I, Jimmy the Jock discussed the famous Zimmerman Telegram which was instrumental in getting the U.S. to enter World War I on the side of Britain and France against Germany.

The circumstances surrounding this telegram provide a great story by themselves (about which the historian Barbara Tuchman wrote a very readable 246 page book, entitled Zimmerman Telegram, in 1958)

At the start of World War I the United States tried to maintain its traditional policy of avoiding being sucked into European conflicts. In addition to our historic policy of avoiding European conflicts, the country was divided, with many sympathizing with our former mother country, England, in her hour of need, while the two largest ethnic groups, the Germans and the Irish, were not keen on entering the war.

Many Germans had strong feelings for their ancestral homeland and were very proud of their German culture and heritage.

This group was both a close knit community with German being spoken in cities with large German populations such as Milwaukee, Wisconsin and other Midwestern and Eastern cities. German language newspapers and German cultural and fraternal organizations were also common in these cities.

As for the Irish, well, they didn't like England and many still wanted Ireland to be Independent of England. President Woodrow Wilson won re-election in 1916 in large part due to his campaign slogan which reminded people that during the previous two years - He kept us out of the War.

The U.S. tried to stay neutral, but as a major shipping nation, we were concerned about the blockades that England and Germany were using to try to cut off trade. Especially irksome was the German use of submarines to sink merchant ships bound for Britain rather than simply ordering them to turn around.

The telegram itself was sent on January 16, 1917 by Arthur Zimmerman, the German Foreign Secretary (similar to the American Secretary of State), to Heinrich von Eckhardt, Germany's ambassador to Mexico at that time.

The ambassador was instructed to approach the Mexican government with a proposal to form a military alliance against the United States. Germany did not want the U.S. to enter the war and it was probably hoped that the threat of the war spreading to American soil might help keep the United States out of the war or, in the event of war, additional American troops would have to be deployed to the Mexican border rather than to Europe. The text of the message is reproduced below.

“We intend to begin on the first of February unrestricted submarine warfare. We shall endeavor in spite of this to keep the United States of America neutral. In the event of this not succeeding, we make Mexico a proposal of alliance on the following basis: make war together, make peace together, generous financial support and an understanding on our part that Mexico is to reconquer the lost territory in Texas, New Mexico, and Arizona. The settlement in detail is left to you. You will inform the President of the above most secretly as soon as the outbreak of war with the United States of America is certain and add the suggestion that he should, on his own initiative, invite Japan to immediate adherence and at the same time mediate between Japan and ourselves. Please call the President's attention to the fact that the ruthless employment of our submarines now offers the prospect of compelling England in a few months to make peace.”

(NOTE: the text above was copied from the copy of the decoded telegram below. Both the coded and decoded versions of the telegram were copied from the website of the U.S. National Archives).

British Intelligence, had previously broken the German super secret code and were able to decode the telegram as soon as they intercepted it. However, in order to make use of the telegram to arouse American public opinion against Germany, they would have had to make the telegram public and explain how they obtained it.

If Britain couldn't substantiate its authenticity, the tactic of making it public would work against them in that it would appear to be a forgery by the British government for propaganda purposes (as it was, when the telegram was made public, many people accused it of being a British forgery).

But there were two big problems with making it public. The first was that Germany would know their code had been broken and switch to another one thereby depriving British military intelligence of a critical source of information at a time when the war was not going well for them.

Second, President Wilson, in a gesture of goodwill toward Germany, had allowed Germany to use the American government's secure diplomatic telegraph line (which passed through England) for their diplomatic correspondence.

Since America did not not have a high level intelligence gathering apparatus in those days (intelligence gathering was limited to the military in the field) and since the Germans were encrypting the messages anyway, this appeared to be a very secure way to correspond with their embassy in Washington.

Finally, in addition to cracking the German secret code, British intelligence had also managed to tap into the American government's secure telegraph line and admitting that they had been spying on the U.S. was not a good way to get the American public to join them in the war.

Despite the fact that they were using Wilson's goodwill gesture to plot against the U.S., this did offer the prospect of double security – an encrypted message over a secure line. The assumption here was that, unlike Germany, the British would not violate the sanctity of the communication system of a neutral nation, especially one that they were trying to recruit as an allay.

As it turned out, unlike the Middle Ages, codes of honor were apparently not to be a part of the value systems of twentieth century national leaders.

In addition to breaking Germany's high level code and tapping into the American diplomatic telegraph line, British Intelligence also correctly concluded that, in order to quickly forward the message to Mexico, the German Embassy in Washington would have to send it via regular Western Union Telegraph.

Since only a few key German Embassies had access to the high level code in which the message had been sent to the U.S. (the fewer copies of a code the less chance of it being compromised), the forwarded message would have to be encrypted with an older and less secure code.

Acting on this assumption a British agent, known to history only as Mr. H., in Mexico City was instructed to try to obtain a copy of the telegram. Mr. H. succeeded in bribing the head of the Western Union office in Mexico City and obtained a copy of the message encoded using an older German code.

Having obtained the telegram outside the U.S. and with the telegram having been sent to Mexico using an old code the British were able to safely release the telegram to the public without having to disclose that they had been spying on U.S. diplomatic communications or had cracked Germany's super secret code.

The decoded telegram was sent back to London where the British Foreign Secretary turned it over to the American Ambassador on February 23, 1917. Two days later, on February 26th President Wilson received the telegram and it was released to the public.

Americans were, of course, upset by the telegram, but they were already upset over German submarine attacks and this only added more fuel to the fire.

Adding to the impact of the telegram was the fact that Mexico, which was just coming out of a revolution and not being able to control its borders, had been forced to stand by while some of its citizens, under the leadership of men like Poncho Villa, were raiding border areas in the U.S.

To combat that problem U.S. Army troops, under the command of General John Pershing, had been dispatched to the border to defend it.

With an American army already on its northern border and uncertain about Germany's ability to spare weapons and money to help them in a war with the U.S., the government in Mexico City decided not to follow up on Germany's offer.

Zimmerman Telegram Pushed the U.S. into War Against Germany

Once the contents of the telegram were published in the United States, Americans were outraged.

This was the last straw which tipped public opinion in the U.S. away from neutrality and toward a desire to enter the war on the side of Great Britain and the Allies.

On April 6, 1917 the U.S. declared war on Germany and General Pershing and his troops were transferred to Europe where Pershing was appointed commander of the American Expeditionary Force in Europe. 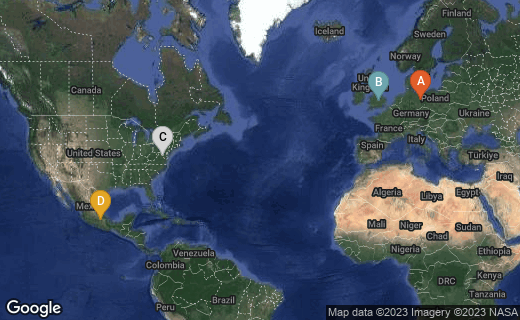 Berlin Germany where the Zimmerman originated.

Washington, D.C.where the telegram was received and forwarded via Western Uniton to German Embassy in Mexico City

Mexico City, Mexico where British agent Mr. H. intercepted it again and that copy used for publication in the U.S. by British