Thousands of Trees for Maarheeze

I have a soft spot for Europe. I love to travel and visit interesting places.

I moved to Maarheeze in 1994. Allow me to give you a short overview of the place where I love living.
Maarheeze is a village in the Dutch municipality of Cranendonck.

The village's name 'Maarheeze' contains the word 'maar,' which means 'swamp,' and 'heeze,' which means 'passage.' So 'Maarheeze' means 'swamp passage.' But don’t let the origin of its name put you off. You won’t find any swamps here today.
Maarheeze originated as an "esdorp." An esdorp is a village form that originated on the fringes of the sandy soils in the Netherlands — going back to the Middle Ages.

The surroundings of Maarheeze are rich in natural beauty. To the northeast of Maarheeze lies a large-scale agricultural area where the Rakerloop flows. Southwest of the village in the direction of Budel and Weert lies an extensive nature reserve managed by the Ministry of Defence. To the east, you will find the Hugterheide. This is a nature reserve, with marshland where you can encounter red deer and the dry coniferous woods. In the direction of Soerendonk you will find woodland alternating with agricultural land where the Buulder Aa flows.
One of the main reasons I still live in Maarheeze has to do with the beauty of this area. I love to cycle and walk here.

Mind you; you must realize that you can’t compare the size of the woods with those you can, for instance, find in the US or Germany. Like the rest of the Netherlands, everything, including nature, is relatively small.

In July 2018, a fire broke out in the Klaterspeel area on the Sterkselseweg. It was a spectacular sight. I spent some time looking at how the fire developed and how it was eventually put out.

Some of these species carry berries. Therefore they are attractive to all kinds of birds and are also less prone to fire than spruces and pines.

In January 2020 Staatsbosbeheer started planting almost 7500 trees in the woodlands of Maarheeze. Before the planting starts, they spread cuttings and additional minerals on about half of the plot, for soil improvement purposes. The planting takes place in cooperation with Land Life Company; a nature restoration organization that works on reforestation worldwide.

Staatsbosbeheer is commissioned by the Dutch government to strengthen the position of nature in the Netherlands. As a leading national public body and as landowner and manager of a sizeable amount of nature reserves, they work to conserve and develop the Netherlands’ unique green heritage. 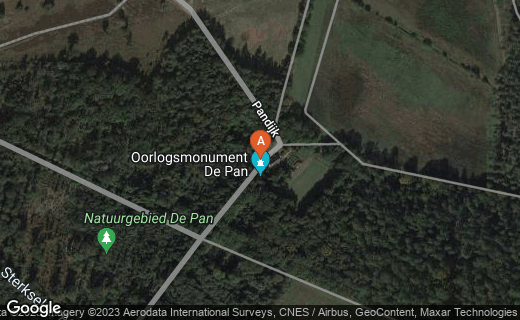 The “de Pan” estate is one of the most beautiful and diverse areas within our municipality. It is located approximately 1 km from where I live and is about 300
acres. The south side of De Pan is most impressive. You can find deciduous and mixed woods alternate with natural heather and swamps.

Initially the Pan was an area made up of water, heath, and farmland. The Sterksels Kanaal (dug 1916-1920) and the Kleine Aa cut through the area. In 1928, the Philips family purchased this area and turned it into an estate. Initially as an investment, but also as campsite for the less fortunate living in the cities in the western part of the country.

Nowadays, de Pan is in possession of Staatsbosbeheer. The policy of Staatsbosbeheer is to allow nature to run its course undisturbed.
Fallen trees are allowed to remain, and cornfields have been cleared, and returned to nature. But maintenance which is necessary for the preservation of nature is still carried out. About ten years ago, the heath was freed from young birches so the heather can once again be seen in all its splendor. Volunteers who helped clear the heather back then still call it 'my piece of heather'.

A lot of animals use this as their habitat:

As far as birds are concerned, the following birds can be spotted:

The wetlands harbour many species of insects.

The modern city dweller spends more and more time behind a laptop or iPad, far away from nature. For children it is no different: they prefer to spend time indoors behind a game console or in front of the television for hours a day rather than outdoors. Both adults and children seem to spend less time outdoors and have little interest in nature than they did in the past.

Do you enjoy spending time in nature?

As a result of the aforementioned fire and the past hot summers and storms, a lot of trees have disappeared. The new tree planting is more than welcome. This will ensure that the nature reserve remains attractive to both humans and animals.

I hope to spend many more hours walking there.

Do you have a favorite spot nearby where you like to walk around?
Please share it in the comments.