The Tongue Map Taste Bud Myth - Where Does Flavor Come From And How Do We Really Taste Foods?

Have you ever heard of a tongue map, the diagram that shows what parts of the tongue taste different flavors? If you have, it is a myth. The tongue map was first described in 1901, in 1942 it was first published in a textbook, and in the 1970s it was disproven. It has been over 40 years since the tongue map theory was found to be false, yet it is still being taught in many places still today. As most of us have tongues, it is very easy to test out how our sense of taste works. We will do an activity to help you to explore your sense of taste. At the end, we will talk about your findings and how the sense of taste works.

Are you a supertaster? If you can taste these PTC strips, you have the dominant gene for PTC taste and you are a supertaster.

How Our Sense Of Taste Works

Now that you have made some discoveries about the tongue map, let's discuss our sense of taste. A number of things make up how we taste something. Below are some of the things that contribute to taste. When you combine all of them, you have the flavor of the food.

When we look at and feel a food we have a mental picture of how it will taste. For instance, a clear cup of a cherry drink may taste more watery to someone than a cup of the same cherry drink with red food coloring. We expect certain things to look, feel, and taste a certain way. Can you imagine picking up something that looked like an orange and having it taste like an apple. It would be very confusing.

Smell is another important aspect of taste. It is what makes up a majority of food's flavor. This is why food doesn't taste as yummy when we have a cold.

Certain people can taste things that other people can't taste. Our genes seem to dictate some of the chemicals in food that each of us can taste. Recent research has named some people supertasters. Supertasters can taste more extreme tastes. Bitter flavors are especially strong to a supertaster. This makes a number of supertasters avoid things like broccoli and other vegetables.

One way to find out if you are a supertaster is to do a PTC test. PTC, or phenylthiocarbamide, is a chemical that tastes astoundingly bitter to some people. Other people taste absolutely nothing. In 2003 scientists identified the gene that contributes to the ability to taste PTC. It is known as TAS2R38, If you have at least one dominant allele of this gene, you will be able to taste the bitterness of PTC. If you can taste it, you are a supertaster. If you can't taste the PTC, you have two recessive alleles.

Spiced gum drops can trick your friends! Try it. 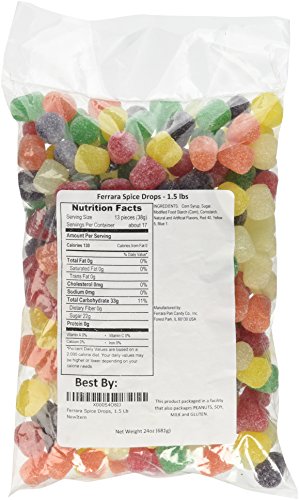 Bet You Can Trick Your Friends!

Now that you know about taste, you can play a trick on your friends.

Go to the store and buy a bag of spiced gumdrops also known as spice drops. Take the gumdrops out of the labeled bag and put them in another container. (A sandwich bag will work.) Important: Don't let you friend see the bag and don't tell them what the flavors are!

Show your friend the gumdrops and let him or her pick out a color. Have your friend inspect the candy. Don't let them smell it. Ask him or her what flavor the candy is and why they think it is that flavor. Sweet, salty, sour, cherry, orange or any other taste answer is fine. Have them describe it as much as possible.

After you get the description, have your friend pinch his or her nose and place the gumdrop in his or her mouth. As he or she chews, ask for a description of the flavor now that it can be tasted.

Once you get that description, have your friend release his or her nose and watch the reaction. I bet your friends will be very surprised to taste a spicy gumdrop!