I visited Lansing, Michigan for the first time in July 2010 and consider it to have been a treat and a rare opportunity to get to know a growing city with friendly people and opportunities expanding from the central city out into the suburbs. I found the city and Ingham County incredible.

Lansing and the East Lansing suburb, where Michigan State University is located, are connected by an effective CATA city bus system in which buses run every 10 minutes most of the day. An additional route is the Entertainment Express form MSU to entertainment venues and a Night Owl route serves late-nite crowds. Rural and door-to-door services are also on the roster.

A $182,000,000 power plant under the auspices of the Lansing Board of Water & Light (BWL) is planned to produce natural gas-powered electric and steam power in REO Town neighborhood just south of Downtown Lansing. This is part of job creation and carbon reduction through the year 2020.

Jobs numbers advertised have nearly quadrupled between 2010 and 2016.

The Red Cedar River flows through Potter Park, where the Potter Park Zoo is expanding to serve more visitors. A biking and hiking trail follow along the river through the zoo and onward through the Michigan State University Campus to the east, although the river flows westward from Cedar lake to the Grand River.

The forested areas along the Red Cedar within a major city are beautiful and provide cooling shade in warmer months around the university campus and the entire zoo. The river in Lansing is deep enough for canoes and kayaks, swimming many months of the year, and some ice skating.

The Potter Park Zoo area around the river and its forests is most peaceful and the MSU parks area along its banks are fantastic for study sessions as well as picnics and relaxation. 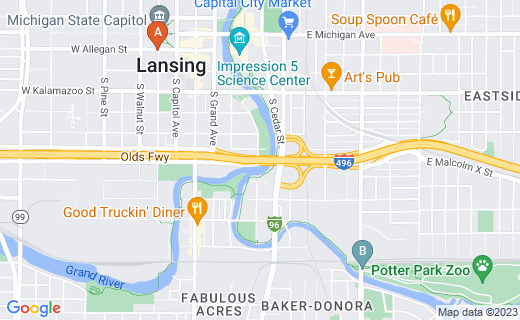 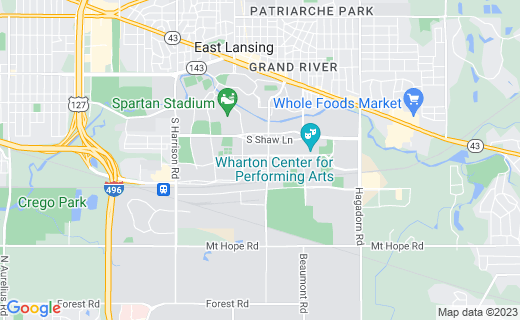 Places to See Around Lansing 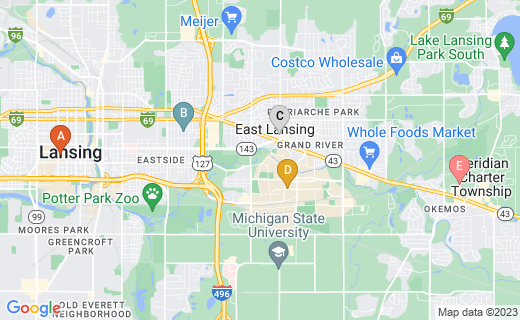 More To See and Do In Lansing

I am impressed with the mass transit system of Lansing overall, because during my Friday in Lansing and East Lansing, I observed buses operating up and down Grand River and other streets less than once every 10 minutes for most of the day. City and cross-country bus services and raiload services are excellent in Lansing/East Lansing. This is in addition to ongoing road improvements and good highways along I-69 and I-496. Routes 43 and 52 were also easy to travel. Further, the Michigan/Grand River Avenue Corridor will be further improved under federal funding for light rail or rapid buses or a combination.

Amtrak rail, Indian Trails buses, and Greyhound buses connect rail and bus services through the East Lansing Amtrak Depot, just north of MSU. The convenient depot is eligible for enhancement under federal funding. Capital Area Transportation Authority (CATA) is the effective bus transit the Greater Lansing Area, including regional malls to the east and west of town and in some rural areas. For instance, transferring just once with only a 5-minute wait between buses, a CATA rider can travel from the Lansing Mall just west of town through Downtown Lansing, MSU, and on to the Meridian Mall in Okemos, east of East Lansing in just over an hour; and drive time is much less when traffic is light.

Besides Lansing mass transit expansion, East Lansing is providing about 1.5 miles of bicycle and pedestrian lanes along Saginaw Street/ I-69 (which I saw near the end of construction). Various improvement projects were also under way at MSU. What is now Downtown East Lansing was built at the crossing of two major Native American trails - the Okemah Road, and the Park Lake Trail, after Lansing became State Capital in 1847. Today, East Lansing is a busy city with Lansing CATA buses, an Entertainment Bus line, a Shopping Bus line, and MSU special routes from autumn through spring.

Friendly restaurants, taverns, and pizza shops populate REP Town and the residential population is increasing. Two city parks are a couple of blocks away: Elm Park and Riverpoint Park, with close access to the Lansing Riverwalk, and scenic Lansing River Trail for biking and hiking. Many of the old factories and plants have been converted to loft apartments and other sytles of living.

The highest-demand job titles appear in this lineup: