Totem Poles Before AD 1700 Around the Pacific Rim

"Totem pole" is a white European term and culturally incorrect when applied to any indigenous carved or sculpted pole.

Where Can We Find "Totem" Poles?

Carved and sculpted wooden poles and rock pillars have been vital parts of hundreds of societies globally for thousands of years.

The word “totem” is an Anglicized pronunciation of the Ojibwa/Chippewa word “doodem”, which means “clan.” The carved figures on these poles are not in any way spirit guides. The emblems represent the founders and foundation stories of specific clans of indigenous people.

The term "totem pole" applied to Pacific Northwest carved cedar poles is a misnomer, provided by a European Catholic priest in the 1800s who visited from his nearby mission in Ojibwa/Chippewa territory, where he was Christianizing the indigenous people. Thus "totem pole" is a white term and culturally incorrect when applied to any indigenous carved or sculpted pole.

The carvings are not religious, but many foundation stories tell of the dual nature of a founder. For instance, Raven took the form of the bird in the equivalent of a Dreamtime accepted by Pacific Northwest groups, but appeared as a man on Earth.

The differences among groups of artistic wood poles and rock pillars around the world have to do with the materials used, the diameter of logs and pillars available, and the specific artistic styles of the cultures creating them.

Archeological evidence proves that indigenous poles have been and continue to be fashioned around the Pacific Rim, in Polynesia, and in faraway places like Russia, Madagascar, and Africa.

These poles have histories in Australia, New Zealand, and Papua New Guinea; all the nations up the Pacific Rim to Siberia, China, Japan, North and South Korea; and in British Columbia, nearby islands, Alaska, Washington, and Oregon.

Carved cedar poles have been adopted by many non-native artists since the mid-20th century. They can be commissioned and purchased. However, native artists still create carved and sculpted poles in their own countries. Around the Pacific Rim

Below, we will look at indigenous carved and sculpted poles on the African continent, followed by traveling clockwise around the Pacific Rim from Australia up and around to Oregon. A few carved poles may even exist in Northern California.

Carved and sculpted poles are found in parts of Africa and Madagascar and many of these are funerary or memorial poles in honor of the dead. Ethiopia is located in east Africa and the republic of Madagascar is an island south of Ethiopia, between the Mozambique Channel on the east and the Indian Ocean.

Southeast Asia and Oceana (or "Oceania" in the 21st century) are home to a variety of interesting artistic wooden poles. These are located predominantly in: Monument poles related to human death have been found in Korea and Australia. Archeologists and cultural anthropologists largely feel that these poles pre-date those found the Pacific Northwest.

Such monument poles are known as mortuary, funeral, or coffin poles; and they are made of either stone or wood. Japan: Poles of the Ainu People

The indigenous Ainu people carved various poles on Hokkaido, the northernmost part of Japan. The carvings have been found to be similar those carved by the Ainu on Sakhalin Island and Kuril Island, both located in the north of Russia.

Ainu totem poles have been carved for many centuries and some of them are done in a highly realistic manner, depicting three-dimensional bears, whales, and owls without folded tails and wings seen in the Pacific Northwest type. 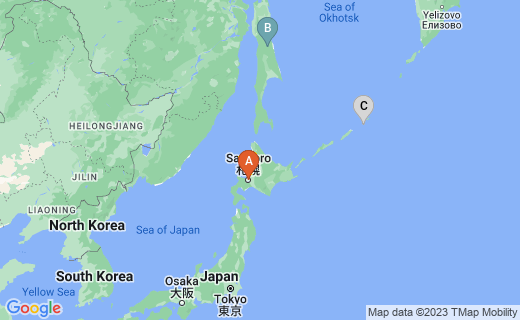 Siberian and Ainu Poles of Russia

It is easy to see from the map below that parts of Siberia lie very near Japan and that human migration likely carried arts like that of carved poles between these areas.

The Sakha people have long bred cattle and horses, so these animals are vital to their society and appear depicted on Sakhan Island ritual poles, including those of the Ainu.

As the USSR began to clamp down on religion after the October Revolution of 1917, shamanism associated across Siberia and Sakhan ritual poles were markedly changed into a more secular culture. Their religious significance was diminished.

Totemism as artistic expression of traditional cultural ecology: comparative analysis of the use of ritual and totem poles among the peoples of Siberia and the Pacific Northwest.

— Jordan, Bella Bychkova. Papers from the Annual Meeting of the Association of American Geographers; 2

Several traditional carved poles sit in the City of Gangneung at the eastern end of the Yeongdong Expressway out of Seoul.

Two poles with carved faces guard the entrance to the city from a place called "Ojukheon" or "Black Bamboo Place." In the background are a myriad of kimchee jars.

The photographer skinnylawyer states that one of the guardians is the Great General Under the Heavens and the other is the Female General of the Underground. It is easy to see the presence of carved and sculpted poles around the upper part of the Pacific Rim on the map below. This suggests that human migration brought the artistic pole tradition along with the indigenous peoples. Hawaiian poles may be related to those of Oceania. 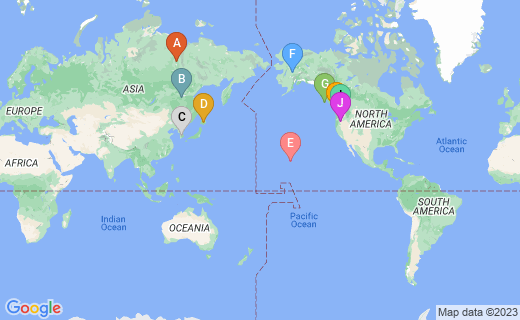 H
Victoria BC:
Victoria, BC, Canada

Carved cedar poles can exist outdoors only about 100 years because of the damp conditions of the Pacific Northwest. Considering this, the US Forest Service began to round up Alaskan poles from abandoned villages beginning in 1938 (Garfield and Forrest, 1961). Many were restored and placed into indoor museums, but many others were beyond repair. Local artists replicated some of these. Carved cedar poles can exist outdoors only about 100 years because of the damp conditions of the Pacific Northwest. Traditionally, they were allowed to decay and return to the Earth.

I was fortunate to see the World's Largest "Totem" Pole raised to a height of 186 feet in Victoria on Vancouver Island BC in AD 1992. Sadly, it was cut down like a tree in AD 2000 and divided into smaller sections.

Tall carved poles in recorded history have caused arguments among native groups. Specifically, the owner of the tallest pole has usually been criticized for it. This points to bullying those with the greatest achievements, leading to the oldest poles being destroyed out of envy.

These carved poles reflect many generations of culture before the 1700s. Some were sketched by a white settler, James Barlett, in 1792. Diaries indicate that indigenous persons explained the centuries-old tradition of their poles, masks, and other carvings.

BC supports over 600 different indigenous groups, most of whom fashion carved poles, masks, and other figures.

Master Carver Chief Tony Hunt of Vancouver Island was likely the most famous contemporary carver in BC until his death in December 2017 but the next generation continues in the traditional carving and clothing arts.

Entire provincial parks are filled with carved cedar poles in places like Victoria on Vancouver Island and in Vancouver, BC. Many of them are the work of Chief Hunt and his large family.

In 1929,the pole pictured above was stolen and taken to Swedan. People of the Haisla Nation came home from fishing and found their nine-meter high mortuary G'psgolox pole gone. However, in 1991, the Haisla discovered their pole in a museum in Stockholm and recovered it.

Below is a painting of the Bella Coola Nation, otherwise called "Nuxálk" in the Pacific Northwest of Washington State and British Columbia.

The work was completed in 1897 in order to capture the long-time indigenous religious ceremonies that involved traditional mystic animals depicted on carved cedar poles. The painter was Wilhelm Sievers (b.1860 - d.1921).

Carved poles from Alaska, British Columbia, Washington, and Oregon depict such animals and others, according the the clan owning each pole. The arrangement of carved characters tell how each clan and family were founded and depict adventures of members of the group. Each pole is the Storyteller, an important part of the family.

While popular modern mythology holds that "totem" poles are limited to the Pacific Northwest, this idea is incorrect. First, the poles are not "totem" poles and second, carved and sculptured poles have been used around the Pacific Rim and even in Russia and Africa for many generations before they appeared with the first inhabitants that came to North America.