Massive Development of a Historic Site

The first time I visited Williamsburg as a child, the site included just two blocks of old buildings on a muddy street and admission was free. Nearby streets of historic buildings were closed to the public, pending preservation activities.

At the end of the open two blocks sat a train track on which sat one railroad car. In it was a display of silk worms spinning silk. Aside from three volunteers in period costumes on the street and some small exhibits to view, this was the entirety of Colonial Williamsburg.

Today, the place is a metropolis that some call an "amusement park." However, it is much more enjoyable than it was in my childhood and I love to go there, especially at Christmas. from the 1970s to the end of the 20th century, the historic preservation and development of this site have multiplied the ground covered by the muddy street I first saw by one hundred times.

I especially enjoy this area in Virginia, because my paternal grandmother, Bessie Spicer, was descended from the family of the famous Richmond Terrell in this state, dating back to the mind-1600s. This family also was ancestral to both President Barack Obama and pundit Rush Limbaugh.

Williamsburg supports multi-million dollar construction expansion of two art museums at present as the arts district began expansion during Spring 2017. These museums will remain open throughout and include:

The arts are celebrated here in a number of additional ways: 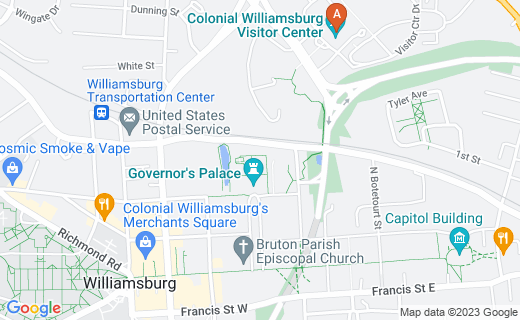 Three-day and Annual passes are a much better deal.

The first year that colonists arrived in what would become Massachusetts was a horror. It was hard for the colonists and hard for the local natives. A bit later, Myles Standish earned the white man's "Indian" name Wotowquenange meant "cutthroat stabbers."

The Massachusetts settlement had no food or running water. The colonists brought no seed for crops, but they brought kegs of beer. Many died of disease, malnutrition, and hypothermia during the first winter. However, Williamsburg settlers fared better.

The first non-native settlers in Virginia eagerly caught fish, clams, and even whales. Soon, they could sell excess fish, whale oil, and whale blubber at fish markets that rose up on locally built docks. Folks also hunted, gathered, and farmed when they learned how, working about 12 - 14 hours a day. At the historic site, dozens of men, women, and young people reenact what it was like to live in early Williamsburg.

When colonists became farmers, they raised the crops of corn (maize), barley, wheat, tobacco, and rice. They took their crops to town on Saturdays to the weekly Farmers' Market, which we also now have today! They sold to fur traders, seamen, merchants, and others. Farmers also raised chickens, pigs, and cows. If they were fortunate, they had fruit trees.

At home, the women and girls spent all day baking bread, cooking, gathering food for natural sources, helping on the farm, sewing, making their own threads and wool and cotton yarns and cloth, etc. You an see all this happening inside the historic buildings.

The United States Park Service and the US States make available a large number of historical landmarks to the local American public and visitors. The National Registry of Historic Places, local registries, and a wealth of historical societies offer travelers a chance to see The Thirteen Colonies as they were in the 1600s and 1700s.

Along with commercial enterprises, all of these entities produce vacation theme parks, some with working farms and villages like Williamsburg that are interesting and fun to visit. Such a trip to even one of these places can provide insight into the daily life of the American colonists.

During November, December, and early January, the people of the town and national park that is Colonial Williamsburg celebrate American Thanksgiving, Christmas, and New Year's, inviting travelers and local guests to attend gala dinners and parties in the style of the Colonies. It's a great way to spend Christmas.

Virginia is the first of the original colonies, and Colonial Williamsburg is a sound place to start when looking for daily colonial life and a traditional American Christmas.

For review, the Original 13 Colonies are listed below, along with their working farms and historic villages that operate to bring travelers back to the days before thje American Revolution.

In the order of their creation, The 13 Colonies: