Who Were the Franks?

The Germanic tribe known as the Franks emerged from the rubble of the Roman Empire and set the continent of Europe on a Christian fuelled destiny. Strong rulers expanded the lands of the Franks by conquest and forming strategic alliances. The Franks are notable for giving the country of France its name and in securing a leading role in the reconstruction of Dark Age Europe. The most famous Frank rulers were Clovis and Charlemagne, both rulers set a majorly pagan Europe on a course towards the acceptance of Christianity over the ancient religions of the continent.

King Charlemagne gained great prestige for his ever-expanding empire, he was the first European king to become the leader of the Holy Roman Empire. This was Europe's attempt at recapturing the power and glory of the Roman Empire. This ambitious tribe almost replicated the might of the Roman Empire in Western Europe. The Franks were aggressive in their desires, yet alongside the Arab scholars, they were able to preserve much of the culture and writings from previous generations that had long since passed into History.

Origins of the Franks.

Initially, the Franks had to compete with other European tribal groups and those ever encroaching Asiatic tribes for the spoils of the former Roman Empire. As Europe was carved up, many old kingdoms reappeared and were soon annexed by the Germanic tribes eager for their own lands. The period is often described in historical texts as the "Great Migration" or the "Migration Period".

Europe in the fifth century after the birth of Christ was a crumbling network of old Roman provinces either in the hands of ailing Governors or swamped with huge numbers of nomadic tribes. There was no effective Roman Legion to enforce borders and defend the lengthy frontiers. With Romes obvious weakness, there was a real opportunity for the many tribes who had either been servile to Rome's wishes or banished from their ancestral lands to rise to dominance.

The Franks were a tribe that originated from the mid-Rhine region of Europe, their true name can only be speculated on and the term "Franks" came from the Roman writers of the time. The Franks were well known to the Romans and were mentioned in the Roman Maps of their Empire by 350 AD. The Franks had eventually settled near modern day Belgium with Rome's begrudging permission. But the Franks desperately desired territory to the south of the Rhine, perhaps this had once been their native land or there was greater wealth in that location. The ancestors of this tribe were often known as an enemy to the Roman Empire and at various points in time, the Franks had served Rome as a well-compensated ally.

The main reason why the Franks had a volatile relationship with Rome was the tribe had been split by geography, politics and military duties. One part of the tribe was content to serve as Auxiliaries to the Roman Legion as it offered certain advantages. This kind of arrangement was known as becoming " Foederati " and these Franks had many rights that other tribes were denied. Other parts of the Franks were not so cosy with the Romans. This group chose to be more aggressive to the Roman Empire and undertook pirate activities from their lands along the Belgium/ Netherlands coastline.

King Clovis ( 466-511 AD ) was the first tribal leader who managed to unite the Franks and establish a kingdom in much of modern day France. He succeeded in reducing the strength of the tribal chieftains and expanding the borders of his territories by the sword. King Clovis the First, was also the first Christian ruler of the Franks and during his rule, he was able to spread the influence of Christianity throughout his fledgling kingdom. This campaign was continued and championed by the Frankish Holy Roman Emperor, Charles the Great, who was also known to history as Emperor Charlemagne.

Before 679 AD, the Kingdom was continually split between the Frankish King's Sons.

King Clovis converted to Christianity as he saw it as a means to legitimize his rule and utilize the power of the Holy Church of Rome. The Roman Empire's power had dissolved but the Church of Rome's own power was increasing with the strength of its faith. Christianity had the numbers to demand obedience and the Catholic Church had a powerful voice. If a noble was able to gain Papal approval, he could further his ambitions in the name of God Almighty. The established lines of succession helped King Clovis and his successors. A king was now appointed by the Christian God and the need for warfare to press a rival claim was almost seen as blasphemy.

King Clovis was the first of the Merovingian monarchs and this line would continue passing within the same family until 751 AD when Pepin the Short and Pope Zachary deposed the sitting king with the support of the nobility. This brought about the start of the Carolingian Empire and Pepin the Short was succeeded by his son Charles the Great ( Charlemagne ). Charlemagne would change the face of Europe in a way not seen since the Romans marched across the continent.

Charlemagne knew that Christianity gave his regime legitimacy and heritage, the power of his kingdom was linked to the prosperity of the Catholic Church. As Charlemagne's power grew in Europe, so did his favour and influence in the Papal state. The Pope could excommunicate a Christian who waged war on another Christian Kingdom, especially when barbarians still threatened the Church from the wildlands of the Eurasian Steppes or the new faith of Islam that saw southeastern Europe as a valuable road to the conquest of the entire continent.

Relations with Other Tribal Groups.

The Franks rose to European supremacy by slowly taking the land from other Germanic tribes. The rule of the Merovingian and Carolingian lines gave the peoples of Europe a solid and organized rule after the near anarchy of the Western Roman Empires decline. The Franks fought brutal campaigns against the Visigoths in southern France, the Frisians along the North Sea coast and the Saxons in the north most parts of modern Germany and Poland.

Charlemagne would impose Christianity upon his Saxon rivals with a religious frenzy that bordered on zealotry. He ordered that defeated Saxons were forced at the end of a sword to convert to the Christian faith. The Saxons in the eighth century were still more pagan than their British counterparts and to accept Christianity was not an option for the loyal followers of Odin.

Those who failed to accept Charlemagne's brand of Christianity often had their head removed from their body. Charlemagne also ordered all pagan places of worship to be desecrated and destroyed throughout Europe. His other royal commands were to have all the Saxons pagan ancestors converted to Christianity in their graves and from the Frisians, Charlemagne demanded that they form a proper code of law or face absolute slaughter.

Had the Franks not conquered Europe. Who do you think would have taken control of the continent? 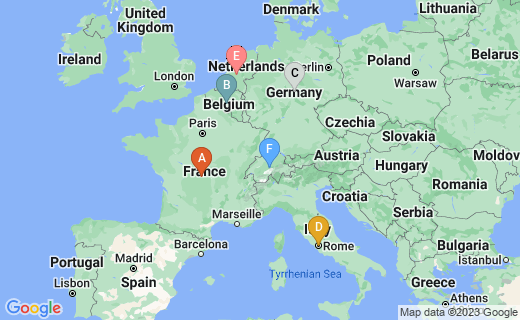 Evolution of the Empire.

The death of Emperor Charlemagne was a great loss to the Franks and to Europe as a whole. Due to the size of the area it covered, his empire was broken up and the distinct regions became separate kingdoms so that his sons could rule. This also allowed Charlemagne's successors to rule with the support of family. The family dynamics of his dynasty meant that eventually friction and personal agendas would appear over time. Less than thirty years after Charlemagne's death, his empire had been effectively split into three. All dynasties must come to an end and the creation of the Three Kingdoms of France, Germany and Italy laid the foundations for the modern Europe we see today.

The Franks have left a great legacy, which is still visible in Europe even today. They implemented rules of law and financed the building of grand Christian Cathedrals. They made a collection of disjointed and wandering tribes people into proud nations across the European continent. The Franks were defenders of the Roman Catholic Church and prevented the spread of other religions into their European Empire.

The modern royal families of Continental Europe can trace their lineage back to the Frankish Empire. The people of the middle and lower Rhine area offered stability and a unifying force in a time of massive movement and upheaval. Had the Franks not established their their Empire, the face of Europe would look very different to the one we see today.

Other Hubs by the Same Author.