Baby Pacifier | " The Binky" and Its' Antique Silver History

Binky Binky...Who's Got the Binky

The coveted Pacifier is the most sought after item by parents in the baby kingdom from around the world and for good reason. Any new parent knows first hand... why.

Wikipedia posts an unverifiable origin of the Pacifier whereas Joaquin Martinez in the mid 1300's supposedly invented the Pacifier after long sleepless nights after birth of his first child. (And what did all the parents do before the 1300's??)... No really? Well maybe because pacifiers were around way before then...clay animals have been excavated from graves in Italy and Cypress that are estimated to date up to 3000 years old. It is believed that an infant child would suck a substance like honey from the mouth of the clay animal on a necklace. These necklaces were found in the gravesite. There are mentions of the medicinal use of honey for infants by ancient physicians as early as the 2nd and 3rd centuries. 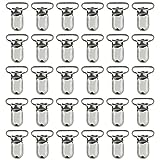 The antique pacifiers from the late 18th century are interesting cultural objects. A colonial teething ring has been known to be worth $2,500. That is some serious Baby Bling. A wealthy child of the late 1700's would have been fitted with a teething device by the local silversmith. The opulant sucking and teething devices were typically made of gold, sterling silver, coral, abalone or mother of pearl. Some had bells and whistles (literally...Is that where this phrase originated! hmmmm) to sooth baby or to pacify as the name implies. It would appear that these early pacifier concoctions were a true safety hazard in today's standards. It goes to show that parents have always and will forever more go to whatever lengths necessary to stop the late night crying insanity.

Later after the 17th - 19th century, the English called their version of the pacifier a Coral . A Coral was made of coral, ivory, and bone. It was often mounted in silver as the handle of a rattle. (Some are very collectible today). The upper crust of society of the 1800's touted the expression, 'born with a silver spoon in his mouth,' as likely the pacifier made of silver was very high-end, If there was really a grand occasion to flaunt the wears, the coral or mother of pearl pacifier was given to baby during social affairs. I read that a musuem curator suggested that these substances were used as "sympathetic magic" and that the animal bone could symbolize animal strength to help the child cope with pain and to ward off evil eye. Coral was selected for its smooth composition and its ancient association with preventing illness and warding off ailments. Mother of pearl offered bright white color symbolizing purity and often times associated with the Virgin Mary. Some 20th century teething rings offered a sterling silver duck and bunny rabbit to entertain baby. Lots of our modern day behaviors come from early symbolism of some kind that suggests deeper meaning than modern belief.

A Madonna and child painted by Durer in 1506 shows one of these tied-cloth "pacifiers" in the baby's hand.

Pacifiers were settling into the modern form around 1900 when the first teat, shield, and handle design was patented in the US as a baby comforter. Rubber had been used in flexible teethers sold as "elastic gum rings" for British babies in the mid-19th century, and also used for feeding-bottle teats.

In 1902 Sears and Roebuck catelog marketed a new style teething ring made of rubber with a hard or soft nipple.

Mid-1800's gum rings are found. Made from elastic these gum rings are featured in Britain Maws in 1839 for 6d each. Now called soothing pads in an 1882 catalog where the device had rings and a guard attached.

Pacifiers were a progression of development of harder teething rings, but they were also a substitute of the softer sugar tits (less elaborate version from lower classes) , sugar-teats or sugar- rags (ie. Oxford English Dictionary) which had been in use in early 19th century America. Cecilia Viets Jamieson described in chapter 2 of the Ropes of Sand in 1873, "a sugar-teat made from 'a small piece of old linen', 'with a spoonful of rather sandy sugar in the center of it', 'gathered...up into a little ball' with a thread tied tightly around it." Rags or gauze material with food stuffs tied inside were also given to babies in many parts of Northern Europe and elsewhere. In some places a lump of meat or fat was tied in the cloth for baby to suck on. Some German countries were known to moisten the rag with brandy or Lutschbeuter: cloth wrapped round sweeted bread .

1909 a columnist for the New York Times wrote that the pacifier was a menace to dental health and touted that it was used by the poorer classes. It was also seen in England as something used by the lower classes of society. 1914 a London doctor complained about the 'dummy teat' falling on the floor to by picked up momentarily rubbed on mother's blouse or lipped by mother and replaced in the baby's mouth. He did not like the cleaning process. (Can't say that I blame him). Some early pacifiers were manufactured in colors and contained elements of lead. The first brand name for pacifiers was trademarked the BINKY in 1935 and owned by Playtex Products, Inc.