I was followed while driving on a highway in the early 1980s by a silent flying object for several miles in Northwestern Ohio.

Scientists at Battelle Memorial Institute in Columbus, Ohio evaluated the reports from the early unidentified flying objects sightings gathered by Project Blue Book in the 1940s and 1950s. From 1952 - 1954 during the Korean War, Battelle personnel researched UFOs in preparation for America's space programming to being later in the 1950s.

This research joined the larger body of observations that contained sleep deprivation studies, examinations of circus performers like tight rope walkers, trapeze artists, and people shot form cannons; and other materials. It was an interesting time in American history.

The examining scientists conducted statistical analyses over a period of two years for the first UFO reports turned in to them and concluded that sighting results were subjective. They also felt that no aliens or far-advanced technologies were present in any of these early UFO sightings. Oddly, this would be the final opinion of Project Blue Book in the 1970s.

This is all interesting and some scientists as well as lay people do not believe the findings. Personally, I was followed while driving on a highway in the early 1980s by a silent flying object for several miles in Northwestern Ohio. 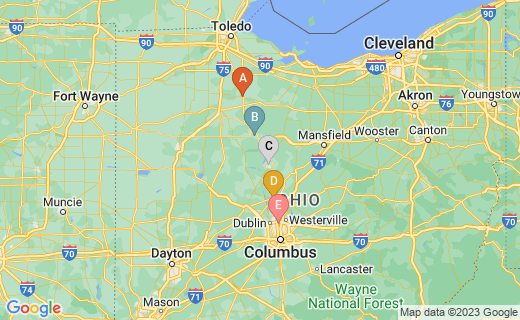 A Silent Aircraft Above

The aircraft was completely silent, without a roar, a buzz or a hum. Just north of I-270, it shot straight ahead faster than any airplane I had witnessed and was in the form of a white light. It then at in a right angle quickly to the west for some distance and than blinked out.

At age 10 years, I conducted correspondence with the United States Air Force (USAF) and Project Blue Book through Donald Keyhoe for a class assignment about UFOs. His correspondence on USAF letter head and the official forms he sent me led me to believe he was a member of the USAF and the commander of the project. However, he was a consultant.

Mr. Keyhoe sent a particular letter urging me and my class to continue studying UFOs and he included protocol sheets upon which to record UFO sightings. None of us had such aan experience. The closest I had was seeing a Mylar balloon in the alley, stuck high on a utility pole.

Our teacher was instructing us in an earth and aerospace unit in order to show us the solar system. NASA was continually in the news, so this qualified as current events. We discussed UFO sightings in the news and brought pictures from newspapers and magazines of unidentified flying objects. Some of these turned out to be faked photographs - some of ceiling light fixtures upside down.

Project Blue Book leadership wrote: 'If a child reported a UFO, policy dictated it automatically be attributed to an overactive imagination.'

Donald Keyhoe and the Classroom

My class assignment was to write to Donald Keyhoe, explain that our class was studying earth science and the UFO phenomenon in America, and ask for any materials he could share with a classroom.

He readily replied and seemed anxious to gather any information from us about any actual UFOs we should see. The recording sheet for UFO sightings was simplistic. We received no pictures, display cards, videos, coloring books, or other materials that NASA distributes today.

My teacher was unimpressed with the Keyhoe materials. When she returned them to me, I took them back home,and my mother threw them away. This was disappointing, because while I never saw anything unidentified in the air except weather balloons, other people in Ohio were seeing them.I was followed once as an adult.

On the east side of our city sat an aircraft manufacturing company involved in experimental aircraft. About 60 miles west sat Wright Patterson AFB which was and still is responsible for reverse engineering non-American technologies, including anything that might be from off planet.I might have been followed by American experimental aircraft. There were stories about aircraft rising straight up into the air and making sharp left and right turns during silent flying. No noise - just some lights and an occasional hum. I remembered that s an adult on that highway in Northwestern Ohio.

The fact that Keyhoe wrote back to a 10-year old girl was unique. Keyhoe was eager to hear about UFOs from anyone. Other people were just as eager to disband Project Blue Book and stop people for talking about it. For example, during the middle years of Project Blue Book, it was written "If a child reported a UFO, policy dictated it automatically be attributed to an overactive imagination." I myself never got a chance to record one! 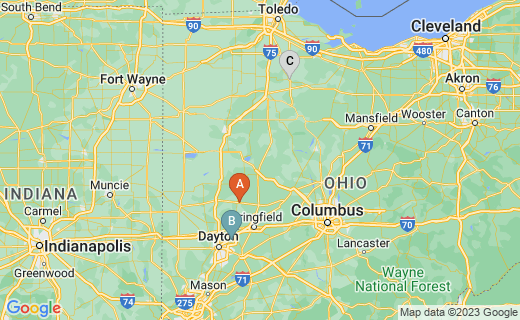 Location at which a UFO began following me.

Why UFOs Are Seen

We seem always to have searched the skies for life. From paintings in caves, on mountainsides, and in passages of some pyramids, we can see a fascination with lights and ships in the skies by ancient humans. There are artistic representations of underwater worlds and of men living in the center of the Earth as well.

Thus, the notions of extraterrestrial life and of the undersea world of Atlantis are long-lived, dating back at least multiple thousands of years ago. All sorts of unexplained phenomena are lumped in with the UFO history around the Internet. The long standing interest gave rise to early futurism and science fiction in literature.

The first science fiction conventions in America were held around 1935, based on the writings of HG Wells, Edgar rice Burroughs and new science fiction writers that were very good. The notion of going to the moon took hold and the romance of the possibility of life on other planets ala Ray Bradbury's The Martian Chronicles and Robert Heinlein's The Moon is a Harsh Mistress and other tales spread. Pulp publications and "dime novels" provided a steady stream of sci-fi stories, some of them classics.

During WWII, unexplained aircraft failures were sometimes blamed on "gremlins", small destructive creatures that became legends among the military and later, commercial pilots and aircraft mechanics. Meanwhile, pilots were beginning to see unexplained things in the sky - lights, objects, even ships with portholes through which they could see a face. The supposed alien spaceship crash in Roswell, New Mexico was reported in 1947 and the media was silenced on it by the government. The cover up and conspiracy theories began in full force and remain active to this day.

A new wave of UFO sightings began in 1952, but Project Blue Book spanned the years 1951 - 1969 and seemed ready for the resurgence. Dr. Hynek, a USAF astronomy advisor, even published a UFO Field Manual in the early 1950s. Soon, test pilots and astronauts were seeing UFOs. By 1969, the Condon Commission was formed, studied the circumstances, and concluded that of 91 cases studied, 61 were misinterpretations or hoaxes and 31 remained unidentified. Project Blue Book was shut down abruptly more or less because it was "considered a waste of time." Many disagreed.

These incidents are described in this link: Project Blue Book by Michael Hall. A link at the bottom of the page will take you to the Home Page of the National Investigations Committee on Aerial Phenomena, with a link to Project Blue Book Archives on the list.

Science and Science Fiction From the 1970s to the 21st Century

UFOs have been sighted for 1000s of years, so they did not begin with Roswell, New Mexico. Some of the m may be products of earth, ignited by early science fiction and mankind's desire to make fiction to facts.

In fact, in 1935, Canada was testing a flying saucer that could fly 8 to 10 feet above ground at around 35 miles an hour. In a workshop in an aerospace science convention I attended a few years ago, a former member of the Canadian Space Agency, an engineer-designer, informed us that the Canadian government had prevented several advanced ships from being built and used on a wide scale, from prior to WWII to today. Is this the basis for "UFOs" - experimental aircraft?

Maybe what characters said in the Pogo comic strip of the 1960s was correct: "We have met the enemy and they are us."

I'm not sure we will live long enough to know all the answers about UFOs...

Other UFOs - Carl Sagan on the Betty and Barney Hill Case