Mother Nature sometimes seems to have a sense of humor, but each of these exotic plants has a reason for its unusual appearance or odor. Nature has a purpose for everything she does; we just need to figure out what it is.

The orchid family has many odd and unusual plants growing across the globe.

The first of the strange orchids is Ophrys insectifera, a European exotic orchid. It is found through much of the European continent, including the Scandinavian countries.

It is known as the fly orchid because the petals on the plant resemble a fly. Or an alien, according to my seven-year-old son.

The fly orchid has a peculiar smell, a pheromone that smells of female bees, wasps and flies which are ready to mate.

This smell attracts eager male insects which pollinate the plants when they attempt to copulate with the pseudo-female insects.

You may have seen the top photo on the right on social media such as Facebook. The flower is described as a "monkey orchid," but that distinction belongs to another orchid genus.

The orchid to the right, gigas-selektiert, is just one of over 120 members of the dracula orchid family.

Dracula orchids are so named because of their unusual, animal-like appearance. The flower grows two long spurs off of the sepals, and has specialized petals which resemble fungi.

Dracula orchids are epiphytes. An epiphyte is a plant that grows on another plant or object without deriving nutrients from the host.

Dracula orchids are found growing in trees and on the ground in Central America and the northern Andes mountains in South America.

This IS the flower which is correctly called a monkey orchid, the Orchis simia.

Looking like little lavender monkeys with beach hats, this orchid wouldn't be a good candidate for the home vase because of its potent smell.

It emits an aroma similar to animal feces, which attracts the flies that crawl over the flower's petals and helps to pollinate it.

This orchid is found through much of Western and Central Europe, though the populations in the UK are threatened.

The monkey orchid grows mainly on grasslands which are regularly grazed by domesticated livestock.

It is a long-lived flowering plant, with one specimen recorded as having lived for over 19 years.

This strange fruit, the Citrus medica is a variety of the citron plant. Its origins are believed to have been in India or China. It is one of the oldest cultivated fruits known to humans.

Because it is so fragrant, Buddha's Hand has widely been used for fragrance. The Chinese people will hang the Buddha's Hand in their homes as a natural air freshener.

The zest of the citrus medica is used for flavoring food, liqueurs and vodka. Its pulp is dry and stringy, making it less edible than lemons.

The Buddha's Hand is used as a religious offering during Buddhist ceremonies. The citron is also an ancient Jewish symbol, used during the Feast of the Tabernacles.

The Rainbow Eucalyptus is also known as the mindanao gum. This beauty is native to Indonesia, Papua New Guinea and the Philippines, but is being planted in tropical climates because of its beautiful bark.

It sheds its outer bark annually, which leaves a green colored inner bark. As this bark ages it changes to orange, blue, purple, or maroon colors.

With a flower span of almost a yard, and a weight of up to 25 pounds, this is a heavy duty flower you won't be sticking in a vase.

Rafflesias are named after Sir Thomas Stamford Raffles, the man who scientifically identified it in 1818. There are 28 currently recognized types of rafflesia.

This flower is nicknamed the "corpse flower" because it exudes the odor of rotting flesh to attract the insects which will pollinate it.

The rafflesia is a completely parasitic plant. Attaching itself to another larger plant, a rafflesia derives all its nutrients by drawing them from their host. The rafflesia has no visible stem, leaves or roots.

It is indigenous to Indonesia, Borneo, and Sumatra. The plant is threatened with extinction due to human development.

Pitcher plants are large, carnivorous plants that trap insects in their large, deep pitcher. The insects are lured to the plant either by color or nectar. The insect fells into the trap and is slowly dissolved.

The first pitcher plant is of the Sarraceniaceae family which are found in North America.

The second plant is found in the tropical mountainous areas of Borneo. This genus of the pitcher plant family can reach lengths of 50 cm.

This particular pitcher plant grows and propagates well only very precise temperatures and humidity levels. Forest fires and the effects of the last El Nino phenomena has severely reduced the number of plants and it is listed as "threatened."

No, this is not a beautiful, hand-carved pitcher left carelessly in the jungle. It is a painted pitcher plant, Nepenthes burbidgeae, native to Borneo. This is a vining plant, with the vines reaching lengths of 50 feet.

Pitcher plants are a carnivorous plant which captures its prey in its deep liquid filled "pitcher.'

It's discoverer Frederick William Burbidge named it after his wife, and described it having "...pitchers pure white, semi-translucent like egg-shell, porcelain-white, with crimson or blood-tinted blotches. Lid blotched and dotted with crimson-purple..."

With a list of aka names almost as long as its black whiskers,the tacca chantrieri is a very unusual plant. Native to China, it grows up to a yard tall, sports black petals and whiskers, and is hardy down to 30 degrees F. The flowers will grow to 12 inches, and the whiskers to 28 inches. They make good container plants, but need high humidity to thrive.

A native to South Africa, this ancient parasitic plant feeds off the roots of other plants. It grows entirely underground except for the flower shoot. It smells of feces to attract the beetles which pollinate it.

It strongly resembles fungi until it blooms, and it has no chlorophyll like a "normal" plant.

It also will take at least one year for the hydnora to produce a flower - and that's only if conditions are just right. There will be up to 20,000 seeds produced by the flower. The seeds are embedded in a gelatinous pulp which has a sweet taste that attracts animals. The animals will then scatter the hydnora african seeds by consuming the the pulp and passing the seeds in their stool.

I think this plant bears a strong resemblance to the plant in the Steve Martin version of Little Shop of Horrors.

Droseras, commonly called sundews, are carnivorous plants which trap and "digest" insects. A mucilage is produced by the plant to trap insects, This mucilage looks like dew on the plant, hence the plant's nickname.

Sundews have evolved to "eat" insects as most of the plants grow in poor soil.

They are found on all continents but Antarctica, and have 194 different species. Unfortunately, due to human development, most of the species are threatened or endangered.

The Cape sundew pictured below is abundant in its native South Africa. It is easy to grow and a striking member of the carnivorous plant family. 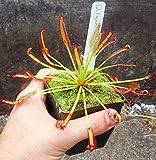 This purple lovely gets its name "amorphiphallus" from the odd shoot in the middle if the flower. Amorphophallus means "misshapen penis."

The flower is fertile only one day a year, and it may go years between flowerings.That isn't very conducive to survival on our rapidly changing planet.

This plant is threatened with extinction due to rainforest destruction.

If you came upon this plant while walking in the woods, you might think you have stumbled on a cult's awful offering to an evil god.

The "eyeballs" are actually the fruit of Actaea Pachypoda, known as white baneberry and doll's eyes.

The white baneberry can be found throughout the southern US and parts of Europe.

What is your favorite "strange" plant?