Those of you that have gone through the public education system surely have played dodgeball once or twice! As I have learned, there are more than just the original way to play dodgeball. Here are the different variations that I have learned.

The game we know and love. Teams are made up, separated by a center line. Each team is given an equal amount of balls and when the whistle is blown, throw the balls at people on the opposite team. Once you are hit you are out. If you catch a ball thrown by the other team, the person who threw it is out. When an entire team is out, the other team wins!

Played as regular dodgeball, however if you are out and a ball is caught by your teammate, you are able to come back in.

Played as regular dodgeball, however if you are out, you and your "out" teammates try to get balls to roll over to you when you are out of bounds. A basketball hoop of something similar is set up across the dodgeball area and if a ball is shot and made into the "hoop" your entire team is back in.﻿

This game is played a little differently. The teams are divided and balls are equally distributed however, once you are hit, you are not necessarily out. Whatever part of your body was hit is out. For example, if your left arm gets hit, you can no longer use it. You are out when you are hit in the head, torso, or groin area.﻿

This game is played with 2 teams and 3 different zones. Each team has their "side," but then in the middle of the court there is a neutral zone in which members from either team can come in to. The game is played with around 5-7 balls. To start the game, you place the balls in the middle of the neutral zone, with each team starting on their back line. On the whistle, both teams sprint up to obtain a ball. If you catch a ball, the person who threw it is out, and if there's anyone out on your team, one player, the one who was out the longest, comes back in.﻿

This is played the same way as regular dodgeball, except each team must pick a "doctor" for their team. The doctor stays out of bounds on one of the sidelines. Once a player is hit, they fall to the ground and wait for the doctor to come save them. The doctor must run onto the court and try to avoid being hit, while running to the hit player. They must tag them and then return to their place out of bounds. If they are hit, the game is over and the opposing team wins. If all the players are on the ground, the game is over and the opposing team wins.﻿

This game is played the same as regular dodgeball except that when you are "out," you don't go to the sideline. In this game, you go to the opposing team's side, back to the back boundary. It is your job to roam that back line and have one of your teammates throw you a ball. If you catch the ball in the air, you can return to your team's side. The game ends when all players are on one side. Whichever side the players are on, that's the side that wins!﻿

This form of dodgeball is very different. The game is played on an individual basis, not with teams. You play on a regular sized dodgeball court, or whatever you have to play on. At the beginning of the game, 2 throwers are selected. It's their job to throw the balls at the other players in the area. If a player is hit, they become a thrower. The object is to be the last man standing. He/she is the winner!﻿

This game is the same as regular dodgeball, however, you use real footballs. It's a great training activity for football players, and will teach agility and quickness too! This is a more dangerous form of dodgeball, so I don't think it would be a good game to play in Phys Ed class!﻿

This form of dodgeball is a great game to play in Phys Ed classes because the balls get thrown at no one! What you do is split your class into 2 equal teams and distribute an equal amount of balls to each team. You will also need a cage ball, which is a large ball 4-6 feet in diameter. Place the cageball in the middle of the dodgeball court. It's each team's job to throw the balls at the cageball to try to push it into the other teams area. The first team to do that wins!﻿

This game is played in a circle with about 3-5 dodgeballs. The circle needs to be big enough to give the people inside a fighting chance. Have 2 people stand in the middle of the circle while the balls are distributed to 3-5 people on the outside. Their job is to throw the ball at the people in the middle of the circle and hit them below the waist. Once they are hit, the player that hit them takes their place. The game goes on until stopped.﻿

This game of dodgeball is played in 3 teams. Divide your class into 3 equal teams (you will probably want to use pinnies for this. The game is played in 3 periods that last 3-5 minutes each. During those three minutes you need to do your best to hit as many people on the opposing teams as possible. If you are hit, you are not out. However, you need to remember how many times you were hit. At the end of each period, each team will add up how many times they were hit and report it to the teacher or instructor. The teams will switch zones after each period as well. At the end of the 3rd period, each team will have 3 totals which will all need to be added up, the team with the least amount of hits wins!﻿

In this version of dodgeball, you need to have at least 3 teams. Divide the dodgeball court up into 3 sections (like in bombardment). You play with 3 period of 1-3 minutes each. Teams 1 & 2 will be standing on their back line for this game while Team 3 tries to "run the gauntlet" (the middle zone) without being hit. If they are hit, the team that threw the ball gets a point. If they make it from one end to the other without getting hit, they receive a point for their team. When the period is over, the teams switch and points are recorded. This continues until all teams have had a chance to throw for 2 rounds and run the gauntlet for 1 round. If there are more than 3 teams, you will have those teams sit out and rotate in as needed. The team with the most points at the end is the winner!﻿

Hopefully these are good variations of dodgeball that you can teach to someone, or use in your phys ed class. Have fun playing! 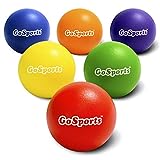