Viceregal Lodge at Shimla is not an ordinary building like many other heritage buildings in Himachal Pradesh. Starting with Lord Dufferin, 13 Viceroys of India used this Lodge as a Summer Capital. The British ruled this sub-continent staying in this building and it is standing tall even today, bearing testimony to some of the important decisions that changed the fate of a few countries in this part of the world.

At present, it houses Indian Institute of Higher Study but many articles and photographs, reminiscent of British colonial rule in India, are still intact and available for the visitors.

During my visits to Shimla, a legendary hill station, I used to be overpowered by the idea of paying yet another visit to Observatory Hill where this Lodge is located. Stealing time out of my schedules, I visited this historical building five times.

I thought of sharing this interesting heritage building in this Hub.

The building was designed by Henry Irwin and constructed between 1880 to 1888 at the Observatory Hill after levelling a portion of 331 acre site. The building has been built in Jacobethan style, using local grey sandstone and light blue limestone. It was first occupied by Lord Dufferin and the height of its tower was increased subsequently by Lord Curzon. This magnificent structure with Scottish flavour in its architecture, is visible from far down the hill side and it still reminiscent of British Empire in India.

Uniqueness of this grand building lies in some of the facilities available at that time (1888).

- Separate spiral iron staircase for use of bathroom sweepers.

View of the Grand Heritage Building

It is the only building which occupies the hill by itself. The lodge is encircled with pine trees which augment its majestic looks. There are sprawling gardens around the building like the one on its left shown in the picture. These gardens are known to have some rare species like maidenhair tree and Japanese maple. Visitors are normally engrossed in knowing the details of the building and many of them miss looking up these beautiful gardens except the front garden. There is a tall tulip tree which is rare keeping in view the abundance of pine and deodar tree in this campus.

Another interesting uniqueness of the Lodge is its position on the Hill. They say water from one side of this building flows down to the Bay of Bengal and to the Arabian Sea from its other side.

Interior View of the Viceregal Lodge

Huge quantities of teak was procured from Burma (now Myanmar) to do elaborate woodwork inside the building. Deodar and walnut were also used which were procured locally or from Kashmir.

The main hall is pannelled with teak. There is a spiralling wooden staircase for three floors. All around the building there are verandas and terraces. The main fireplace just in front on entering the building had a unicorn carved over it. It has now been replaced by the Indian Emblem. The high double-galleried corridor towards the left has a natural light coming from a glass ceiling. They say that the genius of Irwin has been displayed in the interiors.

The ceiling of the building is decorated with walnut wood procured from Kashmir. These ceilings present a grand look against well-lit chandeliers.

The wall-covering might not have been popular in 80's in India. But there are lavish wall-coverings in the building and they are almost intact even now. It is not uncommon to find seepage in the ceilings or side wall of the buildings in hilly stations having lot of rains.

On entering the building one gets an idea how well lit it is. It is well-maintained even today, though one cannot enter some of the rooms as these are being used for the library of Indian Institute of Higher Study and entry is allowed only for members.

There is a beautiful piano lying with an inscription 'English Upright Piano, CIRCA, 1900'. It was manufactured by Collard and Collard, one of the most popular piano company in England.

This was the only building in Shimla having electric light. In fact, it was something new for the residents there. The original switch panels are still maintained, though the fuse fittings have reportedly been added later. It is important to note that it had all original concealed fitting of electric wires.

A few articles have been displayed slightly away from the main building. Buckets with sand are often used for extinguishing fire but there is one fire fighting system displayed which was being used at the time of the British staying there..

Also one man-pulled cart used during those days has been stationed in another corner.

The Famous Round Table

The Lodge bears testimony to many historic events like the Shimla Conference of 1945. In 1947 the unfortunate decision to carve out a new nation Pakistan (including East Pakistan, now called Bangladesh) was also taken here.

The table used for drafting those papers is still lying in one of the rooms in this building.

View from Lodge on a rainy day

Constructing the Lodge at the top of the hill was purposeful as it could afford having a grand view of Shimla and adjoining hills. This view of Shimla during cloudy weather is certainly mesmerising. Also having a view of mountain ranges covered with snow from the balconies of this building might have been a privilege of its occupants. Similarly, magnificent views of sunrise and sunset would have added altogether a different charm for Shimla.

After independence of India in 1947, the Lodge was used as Rashtrapati Niwas (residence of President of India). The President used to use this place as summer retreat only for a few days every year. Professor S. Radhakrishanan, the then President, handed over the Estate to the Ministry of Education in early 60's for establishing Indian Institute of Advanced Study (IIAS) in this Lodge.

Some changes were made in the interior of the Lodge to suit to the requirements of IIAS. Ballroom, Drawing Room and Dining Room have been converted into Library. At present, the Viceroy's room is being used by the Director of the Institute and the research scholar use the then Conference Room as Seminar Room.

Many scholars use this facility for Post-Doctoral research work. Scholars from different parts of India and abroad visit this Institute for discussions and debates. First floor of the building is now for research and residence of the scholars. I happened to observe the proceedings of a session in the seminar room but was advised not to utter a single word during discussions.

Aung San Sun Kyi, a Noble Prize Winner from Burma (now Myanmar) was a Fellow of this Institute in 1986.

Your views about Viceregal Lodge, Shimla

Have you heard about Viceregal Lodge Shimla earlier? 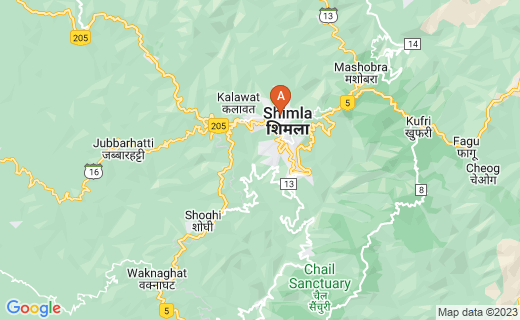