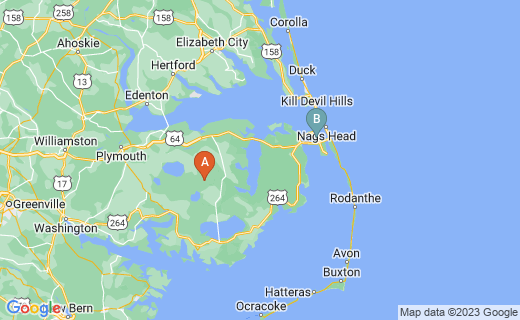 One of the largest and most important wetlands along the eastern migratory bird routes.

One of North Carolina's oldest towns and home to the Lost Colony.

The Pocosin Lakes National Wildlife Refuge is located in eastern North Carolina on the Albemarle Peninsula. Pocosin NWR is situated on the "inner" banks between the Pamlico and Albemarle Sounds. The refuge comprises over 110,000 acres, nearly 90% of which was donated to the NWR system. The refuge lies within three coastal counties; Hyde, Tyrell and Washington Counties. Within the refuge you will find rivers, black water swamps, pocosins, farmland, fields and forests. The northern end of the refuge was once the southern boundary of the Great Dismal Swamp, barrier to exploration in the early days of North Carolina's colonization.

The refuge was originally know as the Pungo NWR, which was founded in 1963. In 1990 the refuge was expanded through generous donations and renamed the Pocosin Lakes NWR. The headquarters for the refuge is in Columbia, NC and can be found at the Walter B. Jones Sr. Center For The Sounds.

Visiting Pocosin Lakes National Wildlife Refuge is an experience you will never forget. It is one of the most unique ecosystems in North America. The trip can be made as a destination or as part of a larger Outer Banks Vacation. The refuge is located along highway 64 on the way to Manteo, Roanoke, Kitty Hawk and the Outer Banks.

Within the refuge you will find many resources for visitors, including the Walter B. Jones Center For The Sound. The center is a valuable resource for visitors and provides in depth information into the refuge and its facilities. There are also pic-nic areas, wildlife viewing boardwalks, trails, boating access on some of the lakes and creeks and hunting in season. The collection of plants and animals in the refuge is prohibited except where allowed by federal,state and refuge regulations.

Camping and open fires are not permitted in Pocosin Lakes National Wildlife Refuge but there are numerous opportunities nearby. There are several areas to camp along the Roanoke River and Lake Phelps. Also nearby is Pettigrew State Park, home of undisturbed pocosin habitat.

The refuge can be entered from a variety of roads. The headquarters and visitor center is located at

The visitor center is on the south side of the highway in between Weir Point Drive and the entrance to Fort Raleigh and The Lost Colony.

What Is A Pocosin

The refuge habitat is described as a southeastern scrub bog which is "characterized by a very dense growth of mostly broadleaf evergreen shrubs with scattered pond pine". This description does sum up the general ecology of the refuge but fails to convey the meaning and beauty of what a pocosin really is.

Pocosin (Po-có-sin) an indigenous American word translating as "lake on a hill".

Pocosin could be used to describe much of eastern NC. A pocosin is a boggy, swampy area characterized by stands of dense trees and interlinking canals, creeks and rivers. In many ways the pocosin wildlife refuge and the surrounding areas are very similar to the Florida Everglades. The refuge is a vast, shallow area of wetland with alternating areas of trees, brush and open areas. Both areas are unique and diverse ecosystems that attract thousands of birds and other animals.

How Does A Pocosin Form

How A Pocosin Forms

The Pocosin Lakes NWR, like most of the rest of eastern NC, is located on the remains of an ancient seabed. The land is very flat and the bed rock consists of sand, calcium and fossilized seashells. The ground is very hard and does not drain well. I can remember as a child when my uncles were excavating for something near New Bern, NC. Once they got through the topsoil and down to the bed rock they started finding finding all sorts of fossils like megalodon and whale teeth.

Thousands of years ago grass, shrubs and small trees began to grow on this ancient sea bed. Over time the leaves, dead grass and limbs built up enough for some soil to form. In some places the dead leaves and other debris built up enough to form basins where small pools, ponds and lakes could form. A pocosin is one of these areas where plant debris has built up over time to a level that could contain a lake. The low lying nature of the land and it lack of drainage help to keep these areas wet. Where the area is really low and the water is able to flow a cyprus swamp will form. The pocosins are similar to the Florida Everglades. They are both very shallow and broad freshwater features that formed on the bottom of an ancient sea.

How A Pocosin Forms

Hunting is permitted in some but not all of the Pocosin Lakes NWR. Some areas are strictly conservation and some restricted to certain regulations. Black bears are protected throughout the park, making it one of the best places on the east coast to view them. Other than that hunters will find a wide variety of game available in season. There is excellent hunting for deer, rabbits and quail with chances to find raccoons, ducks, possums, woodcocks, squirrels, fox, dove and wild boar. The standard NC licenses and adherence to NWR hunting regulations are all that are required.

As the name suggests the Pocosin Lakes National Wildlife Refuge is home to many animal and plant species, including at least two endangered ones. The Red Wolf and Red Cockaded Woodpecker both make their home in the pocosins. Along with them the Black Bear, migratory waterfowl and dozens of other species can be found in the refuge at different times of the year.

The Fish and Wildlife Service manage the wildlife in several ways. Some animals, like the red cockaded woodpecker and the red wolf, are strictly protected. Others are managed according to national and local regulations. Two parts of the wildlife management process include water resources management and fire management. Because the refuge includes and is adjacent to thousands of acres of farmland it is necessary to manage and control the water levels to ensure that the pocosin habitat can be maintained. At the same time wild fires control and proscribed burns also help to maintain the refuge. All of these efforts are aimed at rebuilding, preserving and protecting the pocosin habitat.