WW2. Guy Sajer and His Book "The Forgotten Soldier"

I have read many books devoted to the WWII. I still remember some of them, but others were totally forgotten because of different reasons. Mostly they were focused on some political or purely historical aspects, or they were too much autobiographical (it was also a weak point). But Guy Sajer's “THE FORGOTTEN SOLDIER” is absolutely different from any other book devoted to that period in history.

Since its first edition this book caused numerous disputes. Some journalists and history researches doubt if the book was a real documentary. There is an opinion that this book was a novel written by an author and does not reflect events with 100% correctness. However a value of this book for an ordinary reader is huge. No matter fiction it is, or a purely documentary book, it describes the worst sides of war which are usually hidden by trumpery of nice words and patriotic slogans.

This novel describes a life of a soldier Guy Sajer who was enlisted in the German army in 1942 and finished the war in 1945 on a territory occupied by troops of Coalition. His war can be described in several phrases: patriotic marching, belief in victory and Hitler, successful attacks, retreat and finally the end of war in a ruined Germany. What is more important is not what he did, but what he felt. The book describes his story in simple words. This simplicity of narration and some out-of-body view on events makes the reader to believe in every sentence. The reader can feel the hero and understand his thoughts.

Guy Sajer made his way through the whole Europe. At the same time his soul and his hart lived a life from a blind juvenile admiration of the army to the wise wisdom peculiar to an old man who understands life in all its sides.

The book has no evident political idea. May be some episodes lack certain details but feelings of the main character are evident. When you read it you understand well that the war is a bad thing. Nothings worth it.

It is interesting that there were many books devoted to the WWII in the USSR, but this book was totally unknown to Soviet and later Russian readers. Only recently it appeared on the bookshelves and became well known. I was thinking about this phenomenon but still did not come to a certain conclusion why it was not printed in the USSR. Of course the book was written by our ex-enemy, so may be the soviet censorship was afraid to show German soldiers from an other side? Not all of them were animal who killed Russian soldiers. Just like Russians German soldiers often were just in a situation: “if I will not kill you, you will kill me”.

Guy Sajer was not a monster who wanted to kill others. But I think he was a blinkered man. Understanding of war came later to him.

An other reason why it was not published in the USSR may be in its happy end. The main character was not punished in any way for things he did. He was lucky to escape military court and prison at the end of the war. Probably it seemed to be not very exemplarily from the point of view of Soviet propaganda. But what was not good for them is definitely good for a reader because we all want to see a happy end.

Hope you like this book as much as I liked, or at least get a full size picture of events which happened many and many years ago. 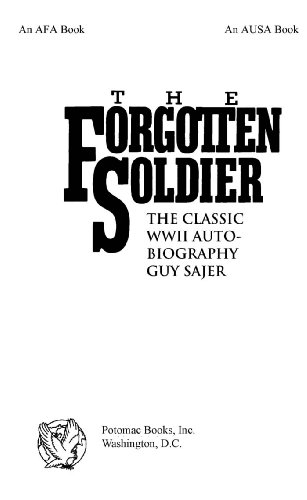