Water Is A Dancer: Climate Science And The Element Of Change

Water is a dancer.  From antiquity, it’s been the element of change, of transformation.  And why not?  Stony-hard in winter’s cold, freely flowing in soft spring rains or punishing autumn floods, vanishing into the air itself under the influence of fire or summer sun.

It took humans longer to fully realize how water reshapes the world.  It wasn’t so hard to see how floods or tides could cut channels or heap sandbanks.  Harder, though, to see how ice, expanding, shatters even stone.  Harder to connect low cloud to the warmth of a muggy night.  And very hard indeed to understand how clear air births dews, mist and fog.

But water doesn’t only dance through its varied phases of solid, liquid, gas. As water vapor, it dances in quite a literal fashion, too. Actually, it’s not alone in that; molecules of most any gas will dance when they meet the right energy as partner.

Imagine, for a moment, a piano with no player, its sustain pedal weighted so that its dampers—the felt pads which silence strings when they are to sound no longer—are raised. All the strings are free to ring out, if struck—they are ready to dance. But instead of a pianist, a trumpeter strides up to the piano and begins to play into it. As quickly as begun, his fanfare ends; in the near-silence that follows, we hear a quiet chord echoing the fanfare—the strings corresponding to the trumpet tones, and only those strings, have gained enough energy to ring out a ghostly reverberation.

It’s called “sympathetic resonance,” and it’s sometimes exploited musically, as just described.  It can become destructive, sometimes—on November 7, 1940, a somewhat related phenomenon called “aeroelastic flutter” famously tore the first Tacoma Narrows Bridge to pieces.  In sympathetic resonance there is a correspondence between the resonant frequency of a physical oscillator—a piano string, for instance—and a corresponding source of energy—such as the acoustic energy of a trumpet tone.  The result is that the oscillator can be “driven” with surprising ease.

In somewhat similar fashion, various molecules respond differently to different frequencies of light; but instead of “ringing,” they emit or absorb energy. Which frequencies are the crucial ones depends upon the internal structure of the molecule. Many molecules are "diatomic"—made up of two atoms. Imagine these atoms within a molecule as tiny balls, linked by immaterial springs.

Nitrogen, for instance, would be represented by 2 identical balls, each standing in for an atom of—you guessed it—nitrogen. But diatomic molecules need not be symmetrical—carbon monoxide, the deadly component of car exhaust, is made up of one atom of carbon and one (slightly more massive) atom of oxygen. In either case, there isn’t much choice how the atoms can move: the pair can rotate like Viennese waltzers, or they can move alternately toward and away from one another—an atomic Jive, perhaps?

Of course, it is well-known that the quantum realm governing molecules like N2 is strange—if considered in relation to the normal expectations we have from our everyday macro-world experiences, at least. One of the ways our world differs from the quantum world shows up in these rotations and vibrations of 'diatomic molecules'—molecules made up of two atoms: while human dancers can spin or move back and forth as fast or slow as they wish (within the limits of their physical capabilities), molecules can only vibrate or rotate at specific rates—their motions are “quantized.”

But many molecules have more than two atoms—carbon dioxide, for instance, is triatomic,  consisting of a carbon molecule linked to two oxygen molecules—one on each arm, as it were.  Now there are more possible combination of motions—for instance, the oxygen molecules, motionless, could “anchor” the carbon while it oscillated back and forth between them.  The possibilities are not just academic—different “modes of vibration” are often associated with different frequencies of radiation.

These facts give CO2 its significance for climate. They mean that it absorbs radiation in the “near infrared” bands—frequencies just slightly too low for our eyes to perceive. These frequencies are emitted by solids at typical Earthly temperatures, radiated upwards from the ground, and absorbed by CO2, making it vibrate. Since molecular motion essentially is  temperature, that means warming.

Often the CO2 will strike one of the oxygen or nitrogen molecules which make up the great majority of atmospheric gases, setting them in motion, too--warming them. Less often, the CO2 will re-emit infrared radiation in a random direction, either to be absorbed again, or to escape from Earth’s atmosphere altogether.

The result of this great dance of transformation is a slowing of the rate at which radiation from the ground actually reaches space. Since energy is coming in at the same rate from the Sun, over time this implies an increasingly warm surface for the Earth. Since warmer objects mean more energetic radiation, eventually a new and somewhat higher equilibrium temperature will be established.

But what of water? Doesn’t it participate in this “greenhouse” dance, too?

Yes—in fact, water is the best greenhouse dancer of all. For years it was widely believed among scientists that water vapor so outshone other potential greenhouse gases as to render their warming contributions moot. Although this belief was shown to be incorrect several decades ago, a recent study--Schmidt et al, 2010 --finds that water is in fact responsible for the lion’s share of the Earth’s greenhouse effect--approximately half.

Considering this capability, and considering the massive amounts of water the Earth hosts, why doesn’t water dominate the greenhouse effect much more completely? Perhaps because it is too good a dancer! Atmospheric residence time for water vapor is brief—just days. By contrast, human emissions of CO2 are expected to continue to affect the atmosphere for millenia.

And more importantly, the amount of water vapor air can hold depends upon temperature—most of us will have experienced this, in the form of the “fall” of dew during the natural cooling of a summer’s evening. Dew doesn’t really fall, though—rather, dew is water condensing out from the water vapor mixed in with cooling air. This dependence means that water doesn’t so much force temperature as it is forced by it.

Moreover, water vapor isn’t evenly distributed within the atmosphere—there is only about 1% above the lowest 6 to 20 kilometers (4-12 miles), the layer called the “troposphere.” Even within the troposphere there is great “patchiness,” in addition to the steady decline with increasing altitude. By contrast, CO2 maintains its relative abundance through the stratosphere, which extends from the troposphere up to about 50 kilometers (31 miles.) Since the greenhouse effect is all about how energy escapes from the atmosphere to space, CO2 and other well-mixed greenhouse gases have more “leverage”, so to speak, than does water.

So, although much of the greenhouse warming is directly due to water vapor, the temperature "set point" is more strongly affected by the more stable and well-distributed CO2.

But water plays an absolutely essential role in one very slow dance indeed—the one that removes carbon from the atmosphere and locks it up in rocks in the Earth’s mantle. The process by which it does this is related in a way to the phenomenon of "acid rain."

In the US this environmental problem has been fairly successfully addressed by various pollution control measures, particularly the 1990 US Acid Rain “cap and trade” plan. Since implementation, the plan has resulted in costs just one-fourth of those originally estimated, has cut emissions to below target levels, and has been estimated to have achieved a 40:1 ratio of benefits to costs. Not bad!

Many other jurisdictions have made comparable progress, and international treaties to help control the problematic emissions exist as well. Nevertheless, acid rain remains a serious and even increasing issue in many areas--especially in Russia and China, where coal combustion without the use of “scrubbers” remains common.

However, even “normal rain” is somewhat acidic.  The acid involved is carbonic acid—H2CO3—which forms naturally when carbon dioxide dissolves in water.  So straight forward is the reaction that nineteenth-century scientists often referred to carbon dioxide itself as “carbonic acid gas,” or even just “carbonic acid.”  To name two examples, both John Tyndall--who first discovered the roles of water vapor and carbon dioxide as greenhouse gases in 1859-60--and Svante Arrhenius--who hand-calculated the first model of greenhouse warming in 1896--used this terminology in the titles of their ground-breaking papers.

At any rate, when “normal” rain containing natural carbonic acid falls upon silicon-containing sedimentary rocks formed over eons from the shells of tiny marine creatures—radiolarians, diatoms and some sponges--this “siliceous” rock combines with the carbonic acid to form ions of bicarbonate. These ions are then carried to the sea, and once again taken into the shells of marine creatures. (So too is calcium, liberated and transported similarly.)

The net result is the transport of carbon to the bottom of the ocean. Over time the carbon becomes part of new sedimentary rock, locking it away inside the Earth for long ages and lowering the atmospheric concentration of carbon dioxide. Not surprisingly, this is a slow process, requiring millions of years. A most stately dance, indeed!

So water dances at many speeds, from the unimaginable fast vibrations of its molecules responding to thermal infrared radiation, to the moment-to-moment dance of its phase changes in response to temperature changes, to the week-long dance of its vapor in and out of the atmosphere, to the slow geological pavanes of rock, air and life, of which it too forms an inextricable part. The "sign of water" is even better justified as the "sign of transformation” than the ancients could possibly have imagined.

So spare a thought once in a while for all these intricate steps in the ongoing dance of life and transformation, and raise a glass of clear ice water in toast.

After all—and in so many ways--you are dancing it, too.

Some Other Titles by Doc Snow 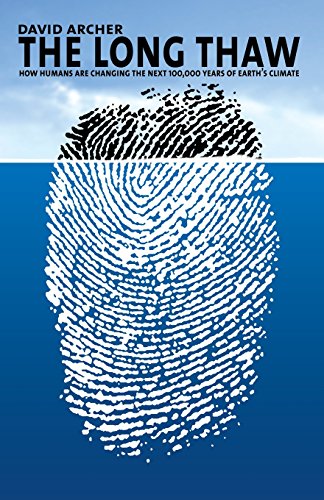 The Long Thaw: How Humans Are Changing the Next 100,000 Years of Earth's Climate (Science Essentials, 5)
Buy Now