"He's the hairy-handed gent / who ran amok in Kent / Lately he's been overheard in Mayfair. You better stay away from him / He'll rip your lungs out Jim / I'd like to meet his tailor ."
- Warren Zevon from Werewolves Of London

In modern times, we've been bombarded with the legend of the werewolf since the invention of moving pictures. Lon Chaney, Jr. was the original, but there were many that came after him. Scores of werewolf movies have been produced over the years, from the vampire-hating Lycans in the Underworld franchise to the great, furry, lovelorn beasts of Twilight. They're pretty much everywhere.

Maybe you've heard some of the werewolf legends that originated in medieval Europe - they figure prominently in folklore all across the continent. Harald I of Norway, a king who reigned from 872 to 930, was said to have been a werewolf. Tales of shape-shifting boogeymen even show up in legends that have been handed down through multiple generations of Native American tribes.

The real origin of the werewolf may date back a lot further that the uneducated, superstitious peoples of medieval Europe or even those terrifying Navajo skinwalkers. The birth of the legend of man turning into wolf may have come from centuries before the time of Jesus and a place that you might not have thought of. 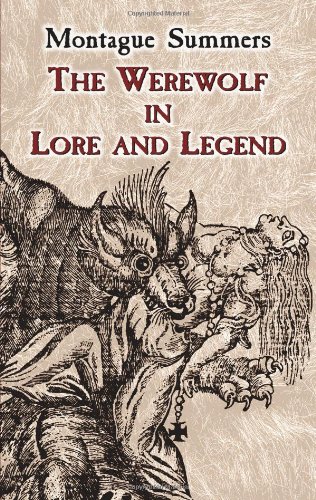 The Werewolf in Lore and Legend (Dover Occult)
Buy Now

The Legend Of The Werewolf Begins In Arcadia

Before Greece became a unified country, it was a mash-up of several smaller states. In the center of the Peloponnese, at the southern tip of the Balkans, was a country called Arcadia. It was a warring nation, and the people inhabiting it were constantly struggling for territory. It was among these warring tribes that the legend of Lycaon was born.

These ancient people believed in a polytheistic religion made up of many major and minor gods. One of these, the granddaddy of them all, was an omnipotent, all-powerful deity named Zeus. The story goes (depending on which version you're reading) that the people of Arcadia had sworn their allegiance to a different god, one named Prometheus, who was credited with having created man out of clay and giving them fire that he stole from the heavens.

Because stealing that fire was a big no-no, Zeus gave Prometheus what could have been considered a stiff sentence, even back then. Poor Prometheus was chained to a rock where a seagull would eat his liver by day. At night, the organ regenerated, so he would have to suffer the torture again the next day and the day after that for all eternity.

So the Arcadians, having been caught in the act of worshiping the wrong god, got a little visit from Zeus. He presented himself in human form and announced who he was to everyone he met. Nearly all of the people immediately turned on Prometheus, or any other god that they may have been worshiping, and proclaimed their allegiance to Zeus... except for this one guy. The king at the time was a very busy, bloodthirsty monarch who ruled with an iron fist, had fifty sons (and three daughters) and went by the name of Lycaon. If worshiping the wrong god was strike number one, this guy managed strikes two through a billion all at the same time.

Zeus Teaches Lycaon A Lesson And The Werewolf Is Born

(Please note that there are multiple versions of this legend, though none are nearly as interesting as this one.)

Lycaon was apparently a pretty stubborn guy. He also didn't believe that Zeus had anywhere near the level of omnipotence that the god led people to believe. So he decided to put Zeus to a little test when he learned that super-god was coming over for supper.

You already know that Lycaon had fifty sons. Well, maybe he decided that forty-nine was really enough, because he had his son Nyctimus killed, cooked and served on a platter for his company. Obviously, this did not make Zeus a happy visitor - he figured the deal out and got some godly revenge. Just as he did with Prometheus, he leveled a terrible punishment on Lycaon.

First, the god of gods destroyed Lycaon's remaining sons, likely with lightning bolts. He then tossed out some seriously amazing juju and brought the slaughtered and fricasseed kid, Nyctimus, back to life. And then, he did something that still sticks with us thousands of years later - he turned Lycaon into a wolf. Some versions of the story have Lycaon running away from Zeus's light show and transforming into the wolf as he fled. Lycaon may have also had the last laugh - he was a bloodthirsty tyrant who now had even more of an excuse to pillage and slaughter. (An alternate ending has everyone who ate the Nyctimus dish also turning into wolves.)

Not surprisingly, Lycaon may have changed his tune. Suddenly, he was the biggest Zeus-follower in Arcadia. He not only turned into a hero of his country, he also established the cult of Zeus Lycaeus (Zeus as the god of light). Some believe that he may have created the Lycaean Games, predating the Panathenaic Games which were a knock-off of the Olympics. It is from him that we have the word lycanthrope (lykànthropos, wolf plus human) which, today, is used to describe someone who is a regular Joe by day, but turns into a furry, growling predator on the night of the full moon. Lycanthropy is a term for mental patients who actually believe they are werewolves.

And there you have the story of how the werewolf originated as the result of a heavenly smack-down and a really disturbing banquet. Remember folks, not everything that goes bump in the night was created by Hollywood!

"We should never try to deny the beast – the animal within us."
- Dr. George Waggner, The Howling