What are the Steps of the Water Cycle?

Some scientists now believe that Earth's water derived from a thick hydrogen-rich layer which reacted with oxides in the Earth's mantle creating water which filled basins forming our lakes and seas. Earlier scientists believed that in the very hot and dry period of Earth's history shortly after its formation (about 3.8 billion years ago), millions of asteroids and comets which were water-rich collided with our planet creating the oceans and seas.

Because water is essential to both the origin and continual evolution of life on Earth, where this life-giving nutrient ultimately came from has fascinated scientists for decades and the debate of where our water originated continues today.

Not only is there debate regarding the origin of water on Earth, there is also a new theory regarding the system of water 'recycling' throughout our planet. The original theory of water cycling on earth came from Bernard Palissy in 1580 who theorized an atmospheric water cycle which is a closed system meaning water neither leaves or enters Earth. Recently, a new definition of the cyclical nature of water has been proposed by William Waterway which demonstrates an interaction between three water cycles -the oceanic, atmospheric and cosmic

Watch the Water Cycle as provided by NASA 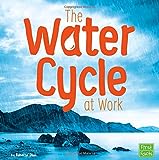 The Water Cycle at Work (Water In Our World)
Buy Now

Bernard Palissy developed the original theory of the cyclical nature of water 430 years ago. His water cycle definition was published in his book, Discours Admirables. His theory describes a closed system where the quantity of water on Earth remains constant but is in constant motion. The same water molecules according to Palissy have been constantly recycled around the Earth since their appearance over 3 billion years ago. The endless circulation of water occurs through the processes of evaporation, condensation, and precipitation

The Atmospheric Water Cycle is powered by the sun. Water is stored on earth in oceans, lakes, streams and groundwater. It is also stored in the atmosphere in the form of water vapour and condensation in the form of clouds.

Although the hydrologic cycle balances the amount of water entering the atmosphere, with the amount of precipitation returning to earth, there is an imbalance in temperate climates. For example, during the Canadian winter, most precipitate is frozen and locked up in solid form on the ground as snow or ice. During the spring thaw, huge amounts of liquid water are quickly released into water bodies creating huge spring runoff and flooding.

Climate plays an important role in the hydrologic cycle as average temperatures are important in the amount of rainfall an area will receive. However, water itself, has an important impact on the climate of a given area.

Water also acts as an energy transfer and storage medium for the climate system.

Understanding of the atmospheric water cycle is very important in understanding other chemical processes and cycles of our planet as all tend to have overlapping components.

William Waterway completed years of research and observations of the cyclical nature of water and presented a new definition for Earth's water cycle at the International Symposium of Aqua Science and Water Resources. This new research, although still supporting the Atmospheric Cycle of Palissy to some extent, suggests a more interactive nature of Earth's water cycle which has been named the waterway cycle.

Without water, life on earth as we know it would not exist. The water present on our Earth owes its presence to a more complex series of cycles than previously understood. From the Earth's core, to the surrounding universe, water sources interact providing us with the continual cycling of this life-giving compound which has resulted in the tremendous diversity of life found on our planet.