Exploring the Legend of Oak Island.

A Mystery Waiting to be Solved.

Since the eighteenth century, a legend has grown around Oak Island and many a man has laid down their life in the last few centuries trying to solve its intriguing mystery. Along with the enduring mystery, there is the promise or hint of unimaginable treasure yet to be recovered. All manner of theories abound over what lays beneath the ground of what would appear to be, a rather unassuming island sat around the coastal waters of the western Atlantic Ocean.

At present, a group of private individuals spearheaded by brothers Rick and Marty Lagina, are seeking to find answers to this centuries old mystery. Using the financial backing of their own personal savings, investment funds and profits from this business venture. The group hopes to reach the "Money Pit" and solve a question that has puzzled thousands since its discovery.

This small leafy island connected by a thin road to the coast of Nova Scotia, Canada has thrown up numerous artefacts. There is much that rests hidden beneath the ground and soon we may discover the reasons for the islands continued mystique.

The efforts of their group are currently chronicled by the History Channel. They have produced a very watchable and informative look at this mystery, with their show called "

The Curse of Oak Island". Over five seasons, the highs and lows of this expedition into the secrets of this landmass have been followed with great interest. The team's investigation into the legend has been done with a mixture of archaeological integrity and historical research of a professional standard.

The team involved in this adventure should be given great credit, as they do not needlessly disturb the sites they investigate and treat Oak Island with more respect than most would, given the potential treasure trove that is believed to reside within the land. It would be so easy just to dig without forethought and risk damaging all that remains below the surface just for a reward that is still unproven.

The reality/documentary series seems to add more and more mystery to the legend, which keeps to the general pattern of Oak Island's continued curiosity. The show itself has proved that there is or has been something there which may not fit with our general understanding of North American history.

There are several features on the island that have held great interest to Archaeologists and would be treasure hunters alike. Possibly the most intriguing feature is an area which is known as the "Money Pit", this subterranean location is believed to hold an undisclosed treasure. It is believed that the "treasure room" has been submerged by sea water due to previous attempts to investigate the hidden area. Current efforts to reach the secret area have been limited to exploratory drilling, which has yielded some interesting results.

When the hole was discovered in 1795, two feet down a flagstone was found that contained a deep dirt filled shaft. After further excavations, oak platforms were found spaced about ten feet apart. Further investigation was halted by a flooding of the tunnel, many believe that the flooding was caused by a booby trap.

If it was booby trapped, then whoever put the obstacle in the path of future explorers, may also know what secrets lay at the heart of the money pit.

Do These Vessels Have any Link With the Mystery of Oak Island?

The excavation of the "Money Pit" is a costly affair, to drill, pump and sort all recovered debris costs a lot of money. It also involves many man hours, sifting through the mud of the debris. Many finds lay in the mud and refuse, to ignore it as a source of further information is foolhardy. No true Archaeologist would ignore such a rich source of date bearing material, as every bit of evidence will be needed if the numerous questions stemming from Oak Island are ever to be answered.

There are conflicting reports on how much has already been spent on exploring the mysteries of Oak Island. The Lagina brothers have along with their backers, channeled huge amounts of money into their numerous exploratory projects on Oak Island. Estimates indicate that as much as $2,000,000 per season has been spent on drilling, construction and the use of specialized personnel with their high-tech equipment. The Lagina's have produced five seasons so far with the History Channel so on the high end, perhaps $10,000,000 has been invested in the project since the Curse of Oak Island appeared on our television screens.

Some of this money has been recouped by tours around Oak Island, TV rights, Investments and Tax Credits by the Canadian Government. Nova Scotia operates a film and television incentive were if $5,000,000 is spent in Nova Scotia on things such as materials, talent, food and fees. Then around 20% is refunded to either the History Channel or the Lagina's Detroit Group through some form of tax incentive or other investment arrangement. Needless to say, big money has been spent on this mystery and it will continue for as long as there is an audience for it.

There has been nearly continuous excavation on the Island since 1795. The first attempt at discovering what is buried under this land was initiated my three boys who apparently saw lights on the Island and decided to dig an impression. This action started the myth and the legend of Oak Island which has continued for over two hundred and twenty years.

In that time period, numerous items have been uncovered all over the island. Some of the finds are baffling and very interesting. Oak Island has yielded Medieval coins, bracelets, Victorian lockets, colonial era crockery, Templar coins, an alleged Templar crucifix, gold rings of indeterminable age, hatchets and swords.

The list is not exhaustive, but there are a few items there which according to what we believe about history, should not really be on that island. The fact that they were present, opens up the question. What were they doing there?

Perhaps they were brought to Oak Island by criminals gangs such as pirates a couple of centuries after they fell out of use. But what if they were not the bounty of Privateers or Pirates?

If they were not brought here as loot, then perhaps we would have to rethink the activities of Europeans in the New World, long before Christopher Columbus and his fellow explorers came across to North America. 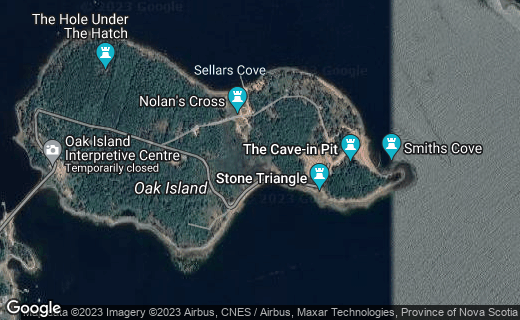 Realistically, What Could be Down There?

Whatever is buried under Oak Island or rests in safe storage at the bottom of the Money Pit is hopefully something special. There are many different theories about what is down there and until it is found.

There is no right or wrong answer.

Here is a list of what some believe rests under Oak Island.

What do you think rests under Oak Island?

A Mystery Without End?

What we have learnt about Oak Island is that it is an expensive mystery to try and solve. And for every step closer to the truth the investigators make, there seems to be even more that needs answering. Whatever is eventually found beneath Oak Island is unlikely to be the end of the story. The journey of these hidden items will keep generations busy for untold years. Oak Island was begrudgingly given up little of its secrets so far, with much more still to be uncovered. The material and the emotional cost has been huge, yet the desire to learn the secrets of Oak Island remains strong as more become aware of the various finds and theories.

If you found this interesting. Why not try?