What is DNA? Nucleotides, Bases and Information Storage

A Bloke down the pub told me...

What is DNA? The Secret of Life

What is DNA? It has been called the molecule of life. But it was not always so. Careful work by Gregor Mendel helped figure out that traits could be passed on from generation to generation, but he had no idea what these 'particles of heredity' were. When Crick and Watson first elucidated the structure of DNA in 1953 they walked into their local pub (the Eagle in Cambridge...in case you were wondering) and announced:

“We have found the secret of life”

But this brings us back to the central question: What IS DNA? Short answer:

DNA is a double-stranded polynucleotide that carries the genetic code. It is the unit of heredity. It is formed by hydrogen bonding between complementary base pairs on two antiparallel DNA strands which allow it to unzip easily. Twisting of the molecule results in a twisted double helix shape. It replicates semi-conservatively.

Everything you wanted to know about DNA in a single paragraph. But, as always with Biology, the beauty is in the detail - so please...read on!

(NB: Whilst the Nobel Prize went to Crick and Watson (and Wilkins) for the discovery of DNA, the road to finding this molecule of life was over 150 years long, and was walked by many prominent minds. Each successive discovery - some small, others profound - brought us one step closer to DNA. See this link on the history of DNA for details )

What are Nucleotides? Simple - the monomer of all nucleic acids. Each one is made of three subunits:

The three subunits undergo condensation reactions to form a single nucleotide - for each nucleotide made, two water molecules are produced. In any set of given nucleotides:

How Do Nucleotides join together?

As previously stated, DNA is a polymer made up of monomers called nucleotides. These are joined together in a condensation reaction - so called because water is released as a by-product of the reaction. This occurs between phosphate group of one nucleotide and the pentose sugar of the next. This results in a repeating sugar-phosphate backbone. The bases project from this backbone into the centre of the molecule.

These chains of nucleotides bonded together are called nucleic acids. Nucleic acids will only bond to nucleotides containing the the same pentose sugar as they do . This prevents RNA nucleotides from sneaking into a DNA sequence, and vice versa.

In DNA A only bonds with T (In RNA, A is complementary to U); C bonds with G. Think of DNA like a jigsaw puzzle: A and T fit together - you cannot force G or C to bond with A.These base-pairing rules occur because of the different structures of pyrimidines and purines. Erwin Chargaff discovered that in ANY sample of DNA, the amount of A = the amount of T; and the amount of G = the amount of C (Chargaff's Rule ).

The shape of DNA is classic - two twisted ladders, winding round each other. The helix is (usually) right-handed.The helix also has a 'wide-groove' and a 'narrow-groove' The overall structure of the molecule is governed by molecular interactions such as van der Waals forces and Hydrogen Bonds. See the links for an animation

How Does DNA Store Information?

The same way as we store information - with an alphabet. Instead of 26 letters, DNA has 4. Instead of different length words, all words in DNA-ese are three letters long. The detail is in the length of the sentence

Put another way, it is the sequence of nitrogenous bases in the DNA that code for molecules that control all aspects of our existence.

Unlocking the Secret of Life 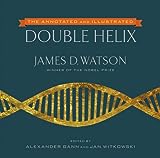