What Happens When Lightning Strikes Sand Like In Sweet Home Alabama

I have to admit, Sweet Home Alabama is not only a great chick flick, but is one of my favorite movies of all time. A romantic comedy from 2002, starring Reese Witherspoon and Josh Lucas, it has been a favorite of mine for about ten years now. And one of my favorite scenes in the movie is when two kids are kissing on the beach, and lightning strikes a lightning rod that sticks out of the sand, creating this beautiful glass sculpture, and he tells her "that's what happens when lightning strikes sand."

Being gullible as I sometimes can be, I believed it at first, until I looked into it some more and found out that there is something that is created when lightning strikes sand, but it is not the beautiful glass sculpture shown in the movie. THAT was merely a figment of the imagination created by "Hollywood."

When lightning does strike sand, it has to create a temperature of at least 1,800 degrees first of all, and when that happens, something is created known as "Fulgurite" and it is not nearly as pretty as the piece of blown glass shown in the movie. The sand effectively "melts", (the silica is what melts), and the grains are then fused together, creating a piece of "Fulgurite" that is sometimes hollow, and sometimes in a tubular shape. Another name for "Fulgurite" is fossilized lightning.

The gorgeous piece of blown glass that was used in the movie "Sweet Home Alabama" was actually created by a company called the Simon Pearce Glass Company, out of Vermont. So much for lightning hitting sand and creating it. If glass sculptures that beautiful could be created that way, I think that lightning rods would cover beaches all over the world by people trying to get some more of those beautiful blown glass sculptures!

There is in fact a prettier sea glass that is sometimes found on beaches, but it washes up on the beach, and looks somewhat like translucent pebbles. This kind of sea glass is often referred to as "Mermaid's Tears."

There is a famous legend about the way that Mermaid Tears came to be, and it really is kind of a neat story. It seems that years ago, on a dark and stormy night (don't great stories usually start this way?), a Schooner was out at sea being perilously tossed about on the sea by a terrible storm. A young mermaid was traveling alongside the Schooner, having fallen in love with the ship, and from a distance, with the ship's Captain. She was very worried about the safety of the crew of the ship and the ship itself. She knew that she had within her power the ability to change the course of nature, to calm the violently blowing winds and still the waves.

But there was a problem... she was forbidden to do this by the God of the Sea, Neptune. He was a stern and very intimidating force, and while she was frightened of what he might do if she disobeyed, she went ahead anyway and stilled the sea and calmed the winds so the Schooner and the Captain she loved would be able to make it to safety.

Because of this act, which was considered to be impetuous, the God of the Sea, Neptune, "sentenced" her to a life way out in the ocean, never to come near the Schooner or her beloved Captain again. It is said that she was alone in the middle of the ocean, and sometimes would cry, the result being the glass "Mermaid tears" that sometimes wash up on beaches everywhere.

Lightning is a pretty and powerful force of nature...

Lightning Is Fascinating, Beautiful, And Dangerous...

Lightning is one of the most beautiful occurrences in nature, and also one of the most dangerous. Lightning is defined as when the atmosphere discharges some of the electricity present in the atmosphere. A lightning bolt can travel at 140,000 mph, and can approach temperatures close to the temperature on the surface of the sun (around 30,000F). Now "that's hot" (sorry, channeling Paris Hilton for a moment there).

Scientists still debate exactly how lightning initially forms. They DO know that things like friction, humidity and wind are all factors, and they believe that ice present in the clouds is another factor, but exactly how it all comes together and begins is still somewhat of a mystery.

There are some very good safety tips to follow from the National Lightning Safety Institute, if you are outdoors in a lightning storm take the following precautions:

If possible, find shelter in a sturdy building or a fully enclosed vehicle. Keep the windows shut if you're in a vehicle. And if you are indoors during an electrical storm, avoid water, talking on the telephone (on a land line) and unplug and turn off items such as computers and televisions.

If (God forbid) you are ever near someone who is injured by lightning, once they have been hit by lightning, the do NOT carry an electric charge, and it is OK to help them and even touch them. Try to do CPR if needed, and if you are trained to do that, otherwise, get help for them as soon as possible.

Jewelry Made From Fulgurite Can Be Found...

One thing I wasn't aware of is that there are places here on the internet that sell jewelry and other objects that are made from "Fulgurite" or fossilized lightning. Sometimes it is found on beaches in interesting colors and shapes, and some very pretty jewelry has been crafted from it!

I love how some of these pieces are formed, one that looks like "Darwin" and one that looks like a "Hula Dancer"... but I have to admit my favorite is the wind chimes. There is something very special about wind chimes created by pieces of "fossilized lightning." Something purely natural and at the same time mysterious.

Some great creativity can be found in the items that have been made using this fossilized lightning, take a look for yourself! 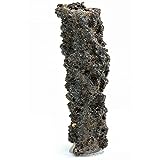